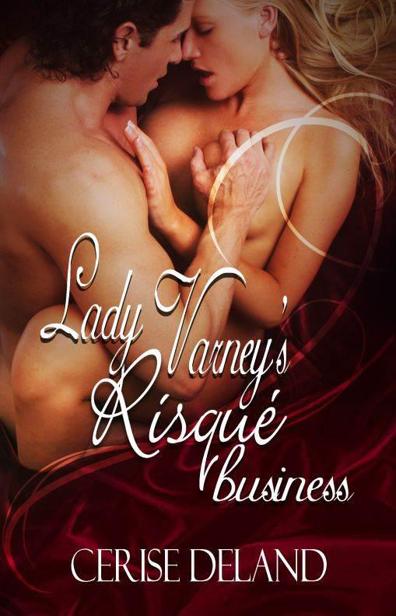 Warning: All rights reserved. The unauthorized reproduction or distribution of this copyrighted work is illegal. Criminal copyright infringement, including infringement without monetary gain, is investigated by the FBI and is punishable by up to 5 years in federal prison and a fine of $250,000.

This is a work of fiction. Names, characters, places and occurrences are a product of the author’s imagination. Any resemblance to actual persons, living or dead, places or occurrences, is purely coincidental.

To readers of Regency everywhere, you have decreed
the Fashion and beautifully so!

Lady Katherine Varney stared into her cheval mirror in her boudoir, fluffed the ruffles at her throat and pursed her lips. “Have I aged terribly since I last saw him, Maggie?” she asked her younger sister. “I hate to think I look like a dowdy matron.”

Margaret Donaldson winked back, tossing her golden curls in glee. “Justin Belmont will be astonished at you, Puss. In the past eleven years, you’ve grown only lovelier.”

“And heavier,” Kitty pressed her palms to her waistline beneath the lavender afternoon receiving gown.

“You’ve had a child. But your bosom is high. Perhaps, even
fuller
? Men like that.”

Kitty grinned at Maggie, married only a year and reminding Kitty of herself at the age of twenty. But Kitty differed from Maggie in one major respect. As a bride, Kitty had not loved her husband. Never had. Nor could. And the man downstairs awaiting her in her drawing room on this Sunday afternoon was the reason why. She frowned at her own reflection. “I’m nervous, though I tell myself I should not be.
He
has come to
me
.”

Maggie arched a brow. “And we know why.”

He wants revenge.
He vowed it years ago.
Kitty squeezed her eyes shut. “He wants a wife.”

“And you can find him one.”

“Why could he not find one the usual way?” The man downstairs had friends—even Prinny—who could make a match for him. “With a bit of help from his set?”

Maggie tipped her head. “Puss, be reasonable. He would have more challenges than most. He’s not your average English gentleman.”

“But he is legitimate now. His uncle made him so. Adopted him and made him heir to the earldom. Many a girl in her first season wants a viscount with a fortune to burn, a house in town, two in the country and—”

“And a past as an American clipper ship captain?” Maggie rose from her slipper chair to put her arms around Kitty’s shoulders. “A man who seized a French frigate and captured an English lady on board?”

“Brought her back to London—”

“And tried to marry her,” Maggie added in a sorrowful whisper, “but her papa wouldn’t allow it.”

“What irony that the elderly man her father married her to died penniless,” Kitty murmured. She could still hear her father bellowing at Justin, demanding to know if he’d taken his eldest daughter’s virginity. He hadn’t.
But how I wish he had
.
Then Justin and she would have been married from necessity—and that would have been better than being married to Henry Varney for money.

A knock came at her dressing room door. “Madam,” her butler called, “Viscount Belmont asks after you once more.”

“Not to worry, Harlow. I am coming.” To her sister, she said, “What a joke that today Justin Belmont is rich enough to buy my house two times over, while I must work to pay off my husband’s creditors.”

“You are beautiful, Lady Varney. Stunning. You are the well-regarded and well-received widow of the late Lord Henry Varney. You know how to navigate the
ton
with wit and grace. And if you also earn fees from the gentlemen who come to you to recommend a bride, then you deserve them. To date, I do believe, you have matched five men to proper ladies.”

“Seven then. And so now, if one of the benefits of your—shall we call it, referral services?—is to reestablish an acquaintance with a man who was once your rescuer and by some measure, your beau, who are we to question the wisdom of the Fates? Hmmm?”

“You are right. At thirty, I should be stronger.” Kitty grabbed Maggie’s hands and brought them to her heart. “You’ll not leave until he’s gone? So I can tell you how it went?”

“How he looks? And acts? What precisely he wants in a wife?” Maggie’s amethyst eyes danced in delight.

“I will revel in the smallest details!” Maggie swept aside. “Now, do go down, Lady Varney. I must learn every tiny detail about the new Viscount Belmont. Before supper, too!”

And so must I.
Kitty stiffened her backbone but felt no stronger than a floundering mackerel. How she took the circular staircase down to her drawing room was a mystery, given her knees of jelly.

“Buck up, Puss,” she chastised herself. Pulling open the double doors herself rather than call her butler, she wished privacy for her meeting with Justin Belmont. She needed to look upon him alone.

And oh, my.
Yes.
To realize that the newly dubbed Viscount Belmont, American-born, Englishman by blood, nobleman now by adoption and the entail, was even more devastatingly handsome than a decade ago when the world seemed fresh and full of positive possibilities.

“My Lord Belmont.” Kitty sailed toward him where he stood before her fireplace, her expression, she hoped, one of civility.
My lord, how can you shake my sanity so easily with that harsh look? That painful curiosity in your hazel eyes?

Here before her stood the man who had saved her from lascivious Frenchmen. Ten years ago he’d been as huge and imposing as Satan. Now he was more muscular, his face more angular, his hair more raven against skin more pale. In clothes that were better tailored and more form-fitting than the loose linen shirts that once had flowed to his fingertips, he was now the epitome of a titled English gentleman. He gave no hint of the American privateer who had captured her body with his boldness, her mind with his intellect and her heart with his artless charm.

She walked forward, her gaze up at his imperial height, her hand out for him to take.

He touched her fingertips, his own cold as the grave. “Lady Varney. Kind of you to receive me.”

You don’t sound as though you think me kind. You sound…dismayed, appalled, even—dear God—disgusted that you are here.

“Please, my lord, do sit with me.” She nodded to one settee, and as he complied, she took the one facing him. His eyes, such a myriad of earthen colors, faceted in the lamplight of late afternoon. His gaze flowed over her. Her hair, her lips, her breasts, her fingers. Everywhere his gaze touched, her body pulsed, remembering how once he had looked at her with desire. Not this…this indifference. That sparked her to lie with her next words, “I am delighted you have come to see me.”

He did not even breathe as he said, “Are you now?”

“Of course,” she countered his challenge, but stayed true to her manners by adding, “I have heard of your recent good fortune.”

He cocked a long black brow. “When the news is published in the scandal sheets as well as the social notes, nothing in London is a secret.”

“But this service of yours,” he said with measured tone as he circled a hand in the air to denote her business, “
this
is a tidbit only the men of the
ton
share with each other.”

She hastened to agree. “Those who need help have found my—”

“Assistance? That is what you call your match-making, am I correct?” One corner of his mouth tipped up, and she could not say if the move denoted humor or ruefulness. “Whatever your term, I need your help.”

His directness had her fighting for a response.

“I hear you pride yourself on your knowledge of human nature,” he prodded her.

She lifted her chin. “Or to be exact, the nature of men.”

He barked in laughter. “If you knew that, dearest woman, you and I would not be sitting here.”

Should she show him the door?
She bristled and sought to hold her ground, reprimand him, if she could. “You asked for this appointment, my lord.”

“It seemed the only way to see you,” he shot back.

“Perhaps I am mistaken, but I was under the impression that you requested a Sunday afternoon appointment because—”

El vencedor está solo by Paulo Coelho
Danger in High Heels by Gemma Halliday
Mr. Blue Eyes: Wild Night Dreaming 1 by Camiel Rollins
09 The Clue at Black Creek Farm by Carolyn Keene
The Girl With No Past by Kathryn Croft
Medicine and Manners #2 by Paula Paul
The Other Side of Silence by André Brink
Asher's Dilemma by Coleen Kwan
The Girl from Charnelle by K. L. Cook
Otherwise Engaged by Amanda Quick