Read Lay Down My Sword and Shield Online

Lay Down My Sword and Shield 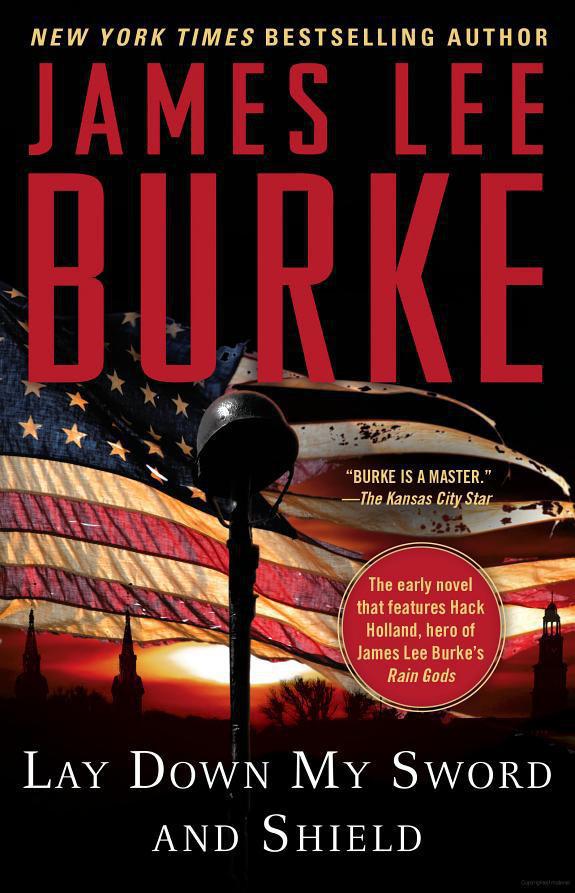 JAMES LEE BURKE
“can touch you in ways few writers can.”
—The Washington Post

“Burke remains a master of the crime novel.”

“Nearly every scene builds to a fine crescendo of tension.”

“The violence is gruesome… the energy is bright-hearted.”

“A meaty, thoughtful exploration of why men do the evil that they do… A hell of a ride.”

Lay Down My Sword and Shield
is also
available as an eBook.

In the Electric Mist with Confederate Dead

A Morning for Flamingos

In the Moon of Red Ponies

Jesus Out to Sea

The Convict and Other Stories

To the Bright and Shining Sun

Lay Down My
SWORD
and
SHIELD

This book is a work of fiction. Names, characters, places, and incidents either are
products of the author’s imagination or are used fictitiously. Any resemblance to
actual events or locales or persons, living or dead, is entirely coincidental.

All rights reserved, including the right to reproduce this book or portions thereof
in any form whatsoever. For information, address Gallery Books Subsidiary Rights
Department, 1230 Avenue of the Americas, New York, NY 10020

GALLERY BOOKS and colophon are trademarks of Simon & Schuster, Inc.

This book is for my father, James L. Burke, Sr.,
who taught me most of the good things I know about

Lay Down My
SWORD
and
SHIELD

A
LMOST NINETY YEARS
ago during the Sutton-Taylor feud, John Wesley Hardin drilled a half-dozen .44 pistol balls into one of the wood columns on my front porch. My grandfather, Old Hack, lived in the house then, and he used to describe how Wes Hardin had ridden drunk all night from San Antonio when he had heard that Hack had promised to lock him in jail if he ever came back into DeWitt County again. The sun had just risen, and it was raining slightly when Hardin rode into the yard, his black suit streaked with mud, horse sweat, and whiskey; he had a shotgun tied across his saddle horn with a strip of leather and his navy Colt was already cocked in his hand.

“You, Hack! Get out here. And don’t bring none of your Lincoln niggers with you or I’ll kill them, too.”

(My grandfather was sheriff and justice of the peace, and the Reconstruction government had forced him to take on two Negro federal soldiers as deputies. Of the forty-two men that Hardin eventually killed, many were Negroes, whom he hated as much as he did carpetbaggers and law officers.)

Hardin began shooting at the front porch, cocking and firing while the horse reared and pitched sideways with each explosion in its ears. Wes’s face was red with whiskey, his eyes were dilated, and when the horse whirled in a circle he whipped the pistol down between its ears. He emptied the rest of the chambers, the fire and black powder smoke roaring from the barrel, and all six shots hit the wood column in a neat vertical line.

Hack had been up early that morning with one of his mares that was in foal, and when he saw Wes Hardin through the barn window he took the Winchester from the leather saddle scabbard nailed against the wall and waited for Wes to empty his pistol. Then he stepped out into the lot, his cotton nightshirt tucked inside his trousers, blood and membrane on his hands and forearms, and pumped a shell into the chamber. Wes jerked around backward in the saddle when he heard the action work behind him.

“You goddamn sonofabitch,” Hack said. “Start to untie that shotgun and I’ll put a new asshole in the middle of your face.”

Hardin laid his pistol against his thigh and turned his horse in a half circle.

“You come up behind me, do you?” he said. “Get your pistol and let me reload and I’ll pay them nigger deputies for burying you.”

“I told you not to come back to DeWitt. Now you shot up my house and probably run off half my Mexicans. I’m going to put you in jail and wrap chains all over you, then I’m taking you into my court for attempted assault on a law officer. Move off that horse.”

Wes looked steadily at Hack, his killer’s eyes intent and frozen as though he were staring into a flame. Then he brought his boots out of the stirrups, slashed his spurs into the horse’s sides, and bent low over the neck with his fingers in the mane as the horse charged toward the front gate. But Hack leaped forward at the same time and swung the Winchester barrel down with both hands on Hardin’s head and knocked him sideways out of the saddle into the mud. There was a three-inch split in his scalp at the base of the hairline, and when he tried to raise himself to his feet, Hack kicked him squarely in the face twice with his boot heel. Then he put him in the back of a vegetable wagon, locked his wrists in manacles, tied trace chains around his body, and nailed the end links to the floorboards.

And that’s how John Wesley Hardin went to jail in DeWitt County, Texas. He never came back to fight Hack again, and no other law officer ever got the better of him, except John Selman, who drove a pistol ball through his eye in an El Paso saloon in 1895.

As I stood there on my front porch that hot, breathless July day, leaning against the column with the six bullet holes, now worn and smooth, I could see Hack’s whitewashed marker under the pin oaks in the Holland family cemetery. The trees were still in the heat, the leaves filmed with dust, and the shade was dappled on the headstones. Four generations of my family were buried there: Son Holland, a Tennessee mountain man from the Cumberlands who came to Texas in 1835 and fought at the battle of San Jacinto for Texas’s independence, was a friend of Sam Houston, later received twelve hundred acres from the Texas Republic, and died of old age while impressing horses for the Confederacy; Hack’s two older brothers, who rode with the Texas cavalry under General Hood at the battle of Atlanta; Great Uncle Tip, who made the first drive up the Chisholm Trail and married an Indian squaw; Sidney, a Baptist preacher and alcoholic, who always carried two revolvers and a derringer and killed six men; Winfro, murdered in a brothel during the Sutton-Taylor feud, his body dragged on a rope back and forth in front of the house by drunken cowboys; Jefferson, who had two years’ business college in Austin and decided to compete with the King and XIT ranches in the cattle market and lost six hundred acres of Holland land as a result; and Sam, my father—Hackberry’s son—a genteel man with a rheumatic heart, a onetime southern historian at the University of Texas and later a United States congressman during the New Deal, and finally a suicide.

Out beyond the cemetery the green hills sloped down toward the river, which was now low and brown, and the crests were covered with blackjack, live oak, and mesquite. The cotton in the fields was in bloom, the rows evenly spaced and stretched out straight as a rifle shot, and the tomatoes had come out big and red in the early summer showers. The sun flashed brilliantly on the windmill blades, now idle in the still air, and in the distance the clapboard and shingle homes of the Mexican farmworkers looked like flattened matchboxes in the heat. My three natural-gas wells pumped monotonously up and down, the pipes on the well heads dripping moisture from the intense cold inside, and occasionally I could smell the slightly nauseating odor of crude gas. The wells were located in the middle of the cotton acreage, the derricks long since torn down, and the cotton rows were cut back from the well heads in surgically perfect squares, which always suggested to me a pastoral reverence toward the Texas oil industry.