Tags: #‘There are many suns,’ he said. ‘Each day has its own. Some are small, some are big. I’m named after the small ones.’ 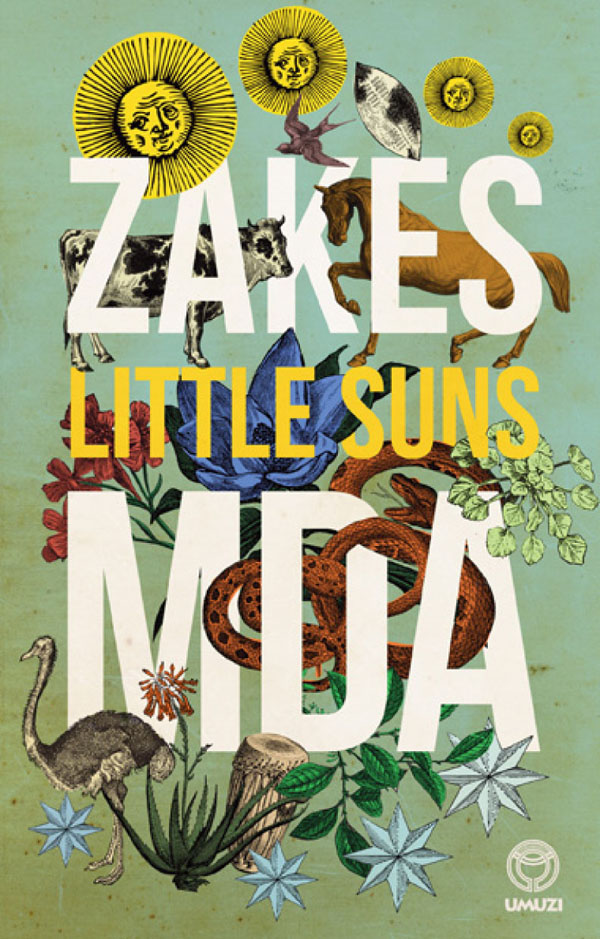 NOVELS BY THE SAME AUTHOR

The Sculptors of Mapungubwe
(2013) 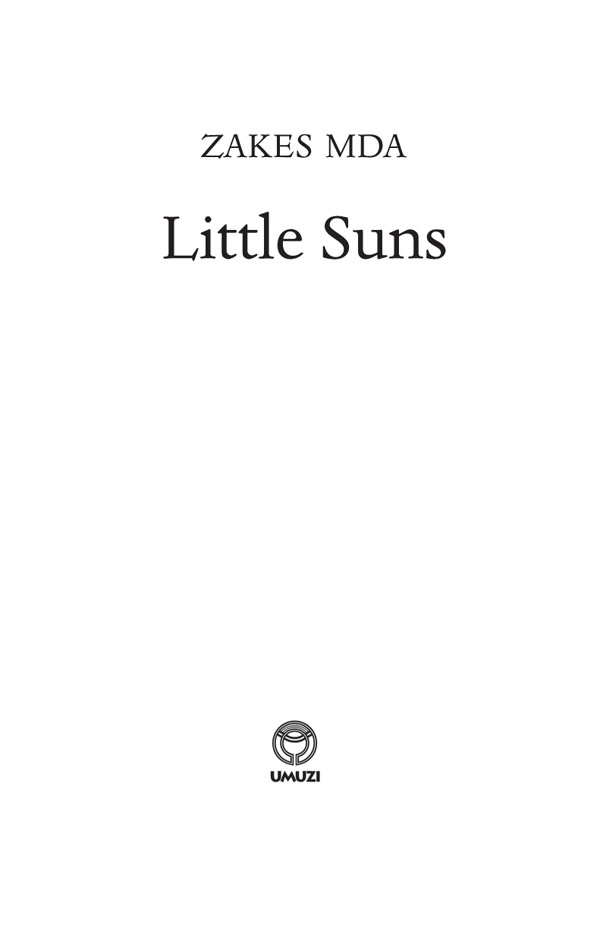 No part of this book may be reproduced or transmitted in any form or
by any means, mechanical or electronic, including photocopying and
recording, or be stored in any information storage or retrieval system,
without written permission from the publisher.

To my father
who made the present possible,
Ashby Peter Solomzi Mda

There were others before him. But we start with Malangana because that is where our story begins. For him, though, it is really the beginning of the end. He is hobbling on twisted crutches made from branches of
umsintsi
, known to the Trek-Boers as the
kafir-boom
– the tree of the nonbelievers – and as the coast coral tree to the colonists. Everything about him is twisted: his face, his lips, his arms, his waist, and his legs. Especially his legs. They are like dry stumps of grey wood with knees forming twisted knobs that knock against each other as the crutches try to find their way down the escarpment among the rocks and shrubs. For generations thousands of feet paved a path from one village to the next where nothing grows and smooth pebbles are embedded in the ground to massage the tired soles of travellers. Yet his feet are beyond massaging. They are granite-hard and have lost all sensation. His erratic gait cannot keep to the path. He staggers and stops to catch his breath and curse the man he has become, and then stumbles on again.

He has a long way to go. How long, he does not know. He does not care either. His journey will stop only when he fulfils his longing. Or when he dies, an eventuality he is not prepared to entertain. Not yet. He will walk from destination to destination – little destinations that seem never to have any finality. He can see his next one already, across the valley and the stream, and up the hill. He can see the whitewashed buildings of the mission station, and the smoke billowing from the houses of the school people surrounding the station. It is something that started even before he left, this practice of surrounding mission campuses with homesteads of school people as a buffer between the missionaries and the hordes who are apt to cut a white man’s throat without any provocation at all – there is a lot of pacification that still needs to be done. A senior regional magistrate has decreed that only natives who conform to the rules of the mission and do not practise immoral heathenish customs should be granted land around the mission centres. Traders and Government officials have adopted the same laager-style settlements, the wagons this time being the houses and gardens and kraals of
amakhumsha
, the school people.

He is confronted by goats. About five of them including a kid. They stand directly in front of him and refuse to give way. ‘
Ziyadelela
,’ he says to himself.
They look down upon me
. They are, in fact, looking up directly into his eyes. They do not even blink as he raises his arms to shoo them away. Even the kid is obstinate. Malangana stares at them, and they stare back unflinchingly. He cannot outbrave them so he shoos them away once more. The billy goat in front raises its forelegs as he lifts his hands. It stands on its hindlegs challenging him directly. His crutches drop and he falls flat on the pathway, face down. He lies sprawled on the ground, and the goats give him one last contemptuous look and go their way. He is struggling, trying to rise from the ground, but is unable to.

A man comes riding a horse.

‘Where are the boys who are supposed to look after these goats?’ he asks.

He dismounts and helps Malangana to his feet.

‘I can give you a ride on my horse,’ the man says as he helps him with the crutches. ‘I am going to the mission station.’

‘I can manage,’ says Malangana. ‘I have my own two feet to walk with.’

‘If it suits you,
khehla
,’ says the man and mounts his horse.

‘
Ukhehla ngunyoko!
’ Malangana shouts after him as he rides away down the escarpment.
Don’t you dare call me an old man; rather give that label to your own mother!

The man looks back in astonishment, decides a crippled man is not worth his trouble and rides on. He has no way of knowing that Malangana is not just a cantankerous old man who woke up with a grudge against the world. Malangana refuses to see himself as an old man. In his mind nothing has changed. The world is as it was twenty years ago. He has returned to continue exactly where he left off. Except he cannot continue alone. Hence his quest.

A woman comes riding a pony. She has pulled up her skirt above the knees in the most immodest manner, so that she can ride astride like a man. She controls the pony with the snaffle rein with one hand and pulls a bridled mule with the other. She is, he surmises, one of the
amakhumsha
judging by the European dress and the lack of decorum. Obviously Malangana is ignorant of the ways of
amakhumsha
. It is not because she is a school person that she rides astride with thighs on full display like a maiden’s.
Amakhumsha
do not even allow their women to ride horses at all as it is ungodly for them to enjoy the highly suggestive movements of a horse. And when they have to ride, perhaps because of some emergency, they must sit with both of their legs hanging on the same side and the skirts covering the legs down to the ankles. This is the etiquette that the English have introduced from the land of their Queen Victoria.

This woman opted for a comfortable riding posture in defiance of the sacred dictates of missionaries.

Once she has greeted him and asked after his health – which according to his indifferent response has never been better – she offers him a ride on the mule. He turns down the offer because he has his two feet to walk with.

‘The sun will set even before you cross the river. Soon it will be dark.’

‘Am not a child. Am not afraid of the dark.’

‘I can’t leave you alone here. God will not forgive me if anything happens to you.’

She alights from her pony and helps him to mount the mule. He does not resist though he is mumbling his defiance, something to the effect that it would be a wonderful world if people learned to mind their own business. She merely exclaims, ‘
Hehake!
’ and makes sure he is settled on the bare back of the mule. And then she hands him his crutches and mounts her pony.

She’ll be much slower this time as the old man seems rather fragile. Also he is not holding the reins because she is using them to lead the mule. He is clutching his crutches instead and bobbing and swaying uncomfortably.

‘Where is this road taking you this afternoon,
bawo
?’ the woman asks.

He pretends that he did not hear. She decides to mind her own business.

Darkness is falling when they cross what she referred to as a river which is really a stream to a man like Malangana who has crossed real rivers such as Senqu, named the Orange River by the colonists, and Telle.

They are even slower when they climb the hill. The stars are twinkling by the time they enter the village, and a sliver of a scythe-shaped moon tries to be inconspicuous among them.

‘Perhaps now you will tell me where you’re going,’ she says.

‘You may leave me right here,’ he says.

‘Right here? Who have you come to see?’

He gestures that she should help him dismount.

‘
Heyi hayi ke!
I can’t just leave you here at this time.’

That’s how Malangana finds himself piled like dry wood on a stool carved from a
garingboom
trunk sharing a meal of samp and beans with a family of
amakhumsha
. Ever the first to grab with both hands the things of the white people, they would be maize-eaters, wouldn’t they? He, of course, would have been more at home eating the corn of his ancestors, sorghum. If he had any inclination to eat at all. Perhaps with cowpeas. And pumpkin. Or with the
amasi
soured milk. But then as a stranger he can’t be a chooser.

He is a strange stranger, not just for the reason that he has never been seen in these parts before, but because his hosts find him odd and baffling. People generally open their doors to strangers; hospitality is an obligation of each household. In return a stranger goes through the ritual of introducing himself, his village, his father’s name, his clan, and even his mother’s clan. He elaborates on the purpose of his travels, on the ravages of the weather, on those who are sick and those who are dead, and on any titbits he has gathered in the villages through which he travelled. That is how news travels. Itinerant strangers are the media. But this one is different. He’s been silent from the time he was ushered into the house by the woman. This however does not unduly surprise the woman, and the husband takes his cue from her. A strange-looking man like this cannot be expected to behave like a normal stranger.

Malangana’s next observation is that although the school people are called
amakhumsha
, which means ‘those who speak English’, this family’s conversation is not in English. From their dialect he concludes that they must be amaMfengu. He has heard that in his absence the land of amaMpondomise was overrun by amaMfengu, many of whom had been converted to the religion of the white man and fought on the side of the British during the last war. Perhaps
amakhumsha
speak their own language when they are among themselves, and only communicate in English with Government. And also with those traders and missionaries who have not yet mastered the language of the people. He wonders how much English he has left. He used to speak the language
ngempumlo
, as his people derisively called the nasal accent of the British. He learned it almost twenty-five years ago when he, as a prisoner of Her Majesty the late Queen Victoria, cleaned Magistrate Hamilton Hope’s quarters and tended his garden. Granted, he may have forgotten a lot of the language since he had no opportunity of using it during his years of exile. But things that you learned as a young person don’t flee en masse from your head. On his way from exile he tested it in Palmietfontein, Sterkspruit and Kingwilliamstown and the white people could understand him very well.