Read Loved by a Devil Online

Loved by a Devil 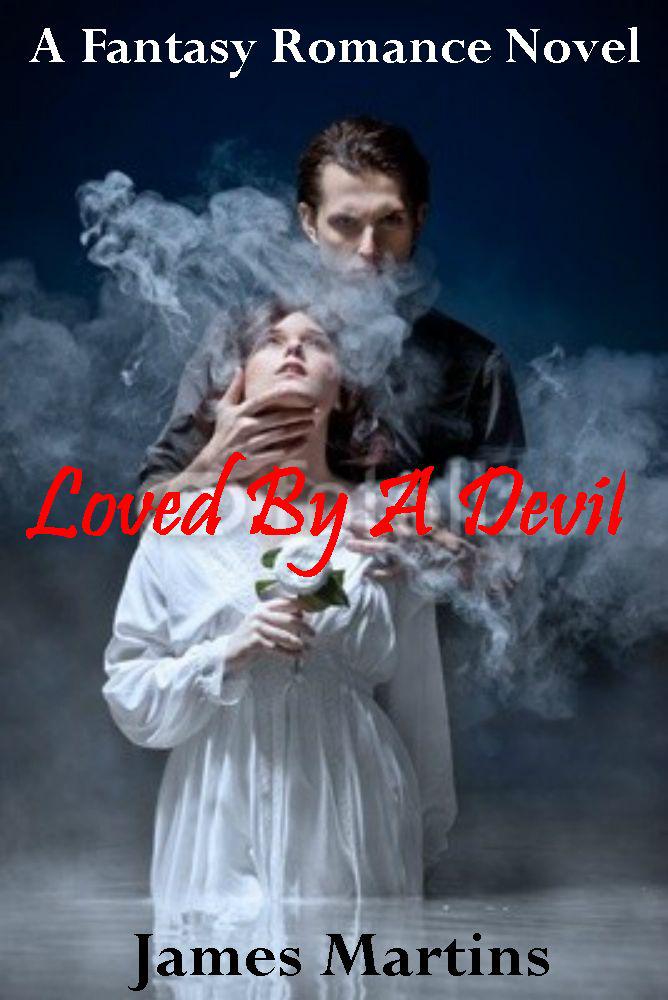 Loved By
A Devil

I never knew how I would die. I should've known he used me. I was an outcast. Someone who didn't belong in this world. I was an immortal. I always wore sweatshirts to cover the spiraling tattoos on my arms. To keep my identity from being discovered, I was some weirdo immortal to some sixteen year old freak. I have been acting like this for so long, I forgot what my old personality used to be like. It was September thirteenth when everyone saw him come on the bus at seven in the morning.

I prayed that he wouldn't sit next to me. Yes, I know that sounded weird, but the last thing I wanted was to be hated even more by all the girls in the school.

All the girls immediately tried to squish together so he would maybe he would supposedly sit with them. He ended up sitting with me all the way in the back of the bus. Yes I did like him, like a normal teenage girl would, but it was all a game. The truth is, evil can be evil. His tan arm brushed mine when he sat down. I tried not to care, but a slight blush came through my ivory skin. And he saw.

To sum this all up, when you finish this story, you'll know how it felt to be loved by a devil.

My old fashioned alarm clock rung at exactly 6:30 in the morning. I stifled a yawn, and turned the switch off on the back of the alarm clock. I sat up in my king-sized bed and looked at the tattoos the spiraled on my arms. They weren't exactly tattoos, but...I don't know. One morning I just woke up and they were there. I totally freaked out, but I decided to let it go. A couple days after that, nothing bad happened to me. Which really was a spirit breaker for all the people who hated me. I got out of bed and went into my small kitchen and got out a box of Honey Nut Cheerios. I don't know what was in this stuff but I loved them. After that, I got a bowl out of the cupboard and poured the cereal in side. Then I got 2% milk out of the fridge and poured that in the bowl too. I grabbed a spoon before sitting down at the table. Instead of eating the yummy cereal, I just twirled them around the bowl, like I did every day.

I ended up just throwing the bowl in the sink. The bowl made a large clang noise before breaking into tiny pieces. Hmmm... maybe I threw it a little too hard. I walked away, pretending that nothing had happened.

I took a shower, and rapped a towel around myself when I was done. I looked myself in the mirror. My eyes were the color of wet seaweed. I shuddered. I hated seaweed. My hair was short, with bangs. Actually, I think it was getting longer. Yeah, by another centimeter. My hair was the color of Hayley Williams' red. I don't know why, but... whatever.

I put on a pair of panties and a bra. After that I put on a white tank top, jeans, socks-(duh)-and a gray hoody sweatshirt from American Eagle. I glanced at the clock. 7:00. I had to be at the bus stop in less than 10 seconds. I grabbed my bag and slipped on some sneakers and locked the door to my house. I sprinted towards the bus stop that was three blocks away. I got there just in time to see the bus stop in front of me.

Yup. I was the only one at the stop.

I put my hoody up on my head, like I did every day.

The doors to the bus swung open and I climbed up the steps and made my way down the aisle. I ended up tripping over someone's leg. Everyone laughed, and I just got up and took my seat in the back. The bus driver closed the doors to the bus and started driving to the next four stops. I looked out the window, watching all the trees and pedestrians speed by.

Suddenly, the bus screeched to a stop and I had to grip the seat in front of me to keep from falling out of my seat.

"What the bejeezus was that for?" someone shouted.

Hmmm...Sounded like Hillary Sullivan, the blondie that always made fun of me.

The bus driver ignored her and swung the doors to the bus open.

"Sorry about that." a husky voice told the bus driver.

"Just take a seat. And don't tell anyone I almost ran you over."

I managed to get a glance at him out of the corner of my eye. He had tan skin, short black hair and his eyes were brown. I know they were simple observations, but he looked so cute, in an inhumanly way, which was weird. All the girls on the bus tried to squish together so maybe he would sit next to them. He didn't.

Every foot step he took he was getting closer to me.

I prayed he wouldn't sit next to me. I know that sounded weird, but the last thing I needed was every girl in the school to hate me even more. If that was even possible. I didn't need to look up to see who it was that was sitting next to me.

I frowned. He was sitting so close to me our arms were touching.

So much for staying in my own bubble today.

I felt something gently bite down on the top of my ear.

I pushed him away with so hard he nearly fell off the seat.

At least that's what I thought.

I felt the spot on my ear where he bit it.

I looked at my fingers. There was blood on them.

I was about to use the sleeve of my sweatshirt to clean up my ear (which is disgusting) but I already felt a tissue dabbing at my cut.

I gave Drew a look.

He raised his eyebrows."You don't want to ruin your sweatshirt do you?" he asked.

He had perfectly white teeth. And he had blood on his lip.

The dabbing continued on my ear.

I took advantage of this moment and looked at what he was wearing. Jeans, sneakers, and a white t-shirt that fit him good.

It was making me REALLY mad.

I took his hand, wanting to snatch the tissue from him.

Instead, a rush of electricity rushed up my arm and I flinched away from him.

I covered my mouth with my hand to keep from screaming out loud.

"Are you okay?" Drew asked.

Obviously, he didn't mean to...do whatever he just did to me.

I managed to just take the bloody tissue away from, making sure our hands didn't touch.

I held the tissue on my ear, glad that the annoying dabbing stopped.

He put his hand on my knee, rubbing it. I felt the electricity rush through my leg, but it wasn't as strong as before.

I took his hand and let it drop on his own knee.

If he has any more physical contact with me, I'm gonna... I don't know what I'm going to do, but I know it's not going to be good.

There was a long moment of silence between me and him.

"What time is it?" I asked abruptly.

I saw him glance at his watch.

We were all so far a half hour late.

"No, I heard what you said. It's just that we're all really late." I told him.

"Whatever." he said, not caring.

"Wonder why the bus driver is so late."

It took me a minute to realize what he just said.

My giant "what" was blocked off by him gripping a hand over my mouth.

He put his index finger over his mouth to make sure I would be quiet.

"What?" I whispered in a rush.

"Don't you remember? He almost ran me over." he told me.

"You mean you're predicting that he's drunk." I said.

Another half hour passed, and I ended up correcting any answers on my homework. After that I felt that my left hand was wet.

I looked at my hand, remembering that I was holding the tissue on my cut. The tissue was all bloody and soaked.

Before I could ask if Drew had any more tissues, he handed me a baby wipe for the blood on my hand and an old style handkerchief.

I wiped my hand until it was clean and looked at the design on the handkerchief. It was an ivory color. I think it was silk. Cotton? I don't know.

"Just put it in your sweatshirt." Drew ignored the fact that I just yelled at him.

I shoved the handkerchief inside the pocket of my sweatshirt.

"Yeah, because you bit it!" I hissed.

"Why did you even do that?" I muttered.

"There's always a good reason to do something." He muttered back to me.

I accidently forgot that the baby wipe in my hand wasn't a tissue so when I pressed it directly on my cut and it stung horribly.

I used the sleeve of my sweatshirt to cover up my cut, which was still gushing blood!

A minute later I felt a hand playing with a strand of my hair.

That was the last straw.

I smacked Drew's hand away and got up from my seat, realizing the whole bus was empty.

"How long has it been like this?" I asked Drew.

I walked down the aisle of the bus and went outside.

I could feel him walking beside me.

He held one of the front doors of Old Dale High School for me and followed me to my locker.

Meanwhile, I was getting really annoyed with impatience.

I entered the combo on the lock and swung the door open and got my books out.

I slammed the door shut.

"Your being a little crabby." Drew commented.

"So aren't you excited?" he asked with no feeling.

"For what?" I questioned.

"I really hope we don't, because then I would shoot myself." I said.

"Whatever." Drew walked away.

I walked to Biology and quickly took my seat when the teacher wasn't looking.

Good. He doesn't have this class with me.

I heard a chair pull out beside me.

The nurse was putting stitches in my ear, which (yes, you've guessed it!) was still gushing blood! I don't even know why Drew bit it. I'm gonna have to ask him why he did that.

"So how did this happen?" she asked.

"On what?" the nurse questioned.

She just wasn't going to let it go, was she?

"On something...sharp." I answered uneasily.

I had the feeling she didn't believe me. At least she let the subject drop.

Meanwhile, Drew was sitting in one of the waiting chairs playing with his phone.