Parisians: An Adventure History of Paris 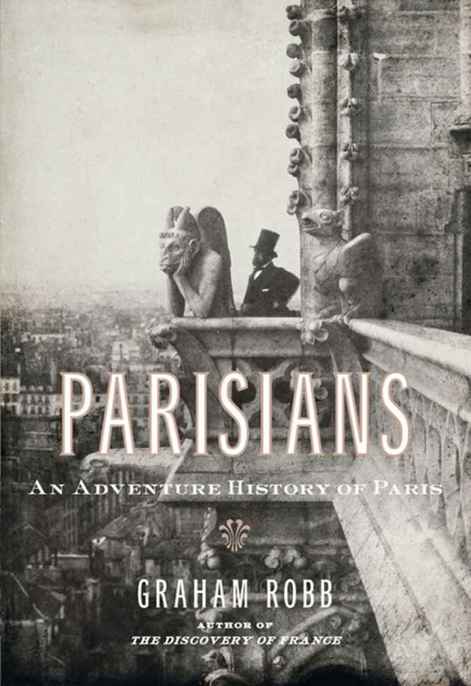 Also by Graham Robb in Picador

THE DISCOVERY OF FRANCE

An Adventure History of Paris

F
ILES OF THE
S
ÛRETÉ

A P
ROPERTY IN
B
OHEMIA

M
ARCEL IN THE
M
ÉTRO

A L
ITTLE
T
OUR OF
P
ARIS

E
XPANDING THE
D
OMAIN OF THE
P
OSSIBLE

I
LLUSTRATIONS IN THE
T
EXT 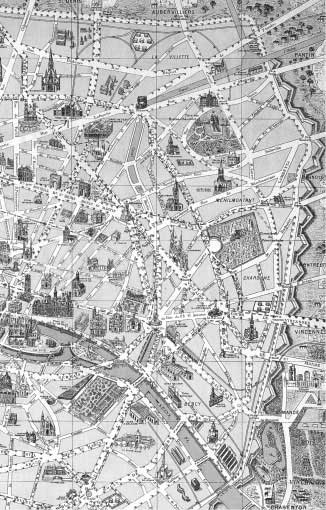 B
Y THE TIME
I reached Paris, the Bastille had disappeared. The map supplied by the tourist agency clearly showed a ‘Place de la Bastille’ in the east of the city, but when I emerged from the Métro at the station called ‘Bastille’, there was nothing to see but an ugly green column. Not even the vestige of a ruin remained. On the base of the column was a date in dirty gold lettering–‘JUILLET 1830’–and an inscription praising citizens who had died in the defence of ‘libertés publiques’. The French Revolution, I knew, had taken place in 1789. Evidently, this was some other revolution. But if the King and the aristocrats had been guillotined, who had massacred the defenders of liberty in 1830? The monument offered no explanation. Later, an older boy at school told me of yet another revolution, which I had missed by only seven years.

For my birthday, my parents had given me a week’s holiday in Paris. The package included a room in a small hotel near the École Militaire, some clues to monuments and cheap restaurants, a voucher for a boat-ride on the Seine, and a coupon to be redeemed at the Galeries Lafayette for a free gift. My suitcase contained what seemed an excessive amount of clothing, some emergency provisions, and a second-hand copy of the works of Charles Baudelaire. This was my guide to all the mysteries and indefinable experiences that filled the space between the famous sights. I read the ‘Tableaux parisiens’ and the chapter on ‘L’Héroïsme de la vie moderne’: ‘Parisian life is bursting with wonderful, poetic subjects: the miraculous envelops us; we breathe it in like the atmosphere, but we do not see it.’ Deciphering Baudelaire in a café near the Tour Saint-Jacques, with the rain blurring the faces on the street, dissolving the Gothic stones into misty air, I was quite certain that I could see it.

During that week, I made a number of other interesting discoveries. I found the little cottage across the river from the Eiffel Tower where Balzac had hidden from his creditors to write
La Comédie Humaine
. I climbed up towards the white dome of the Sacré-Cœur, and found a provincial village full of cheerful cafés and artists all forging the same paintings. I walked through the Louvre for hours, forgetting to eat and remembering almost nothing. I found medieval streets that were paved with sand, and pondered graffiti that seemed to have been written by highly educated people with serious political opinions. I walked past limbless beggars in the Métro, and, in
quartier
s not mentioned in the pocket guide to Paris, I saw women of the kind described in ‘Tableaux parisiens’.

On the first day, after trying to practise the language I had understood to be French, I decided that Paris was best experienced in a state of silent contemplation. It turned out to be possible to walk from one side of the city to the other in half a day, and I did this several times, until I began to plan my days by marking numbers on the bus-map. By the end of the week, numbers 27, 38 and 92, and most other routes that ran buses with open rear platforms, were old acquaintances. I left the boat-ride to the last day, and slept through part of it. When I boarded the airport bus at Les Invalides with a bulging case of second-hand books, some of which I suspected of being priceless treasures, I had seen so many sights that I felt only slightly guilty about leaving my free gift uncollected at the Galeries Lafayette.

One of the most important discoveries came too late to be of use. On the plane home to Birmingham, an American gentleman struck up what he must have hoped would be a conversation. He asked if I had seen something called the Latin Quarter. I told him I had not (though I later found out that I had). ‘Well,’ he said, ‘you’ll have to go back! If you haven’t seen the Latin Quarter, you haven’t seen Paris.’

The following year, I returned with enough money for two weeks, determined to find a job, which I did, after three weeks, and then stayed for six months. Later, I came to know Paris well enough to realize that I would never really know it. The sight of a heavy
porte cochère
closing on an inner courtyard seemed to be a characteristically Parisian sight. I made some Parisian friends, most of whom had not been born in Paris but who were proud to think themselves Parisian. They showed me places I was never able to find again on my own, and they shared a certain Parisian
art de vivre
: sitting in traffic jams as a form of
flânerie
, parking illegally as a defence of personal liberty, savouring window displays as though the streets were a public museum. They taught me the tricky etiquette of pretending to argue with waiters, and the gallantry of staring at beautiful strangers. As a student, I read novels and histories, and tried to match the information to the visible facts. I learned to distinguish one revolution from the next. Eventually, I was able to explain the column in the Place de la Bastille, and I could even understand some of the political graffiti. But there was always something cumbersome and incongruous about this deliberately acquired knowledge. It was the baggage of a historical tourist. I read all seven thousand entries in Jacques Hillairet’s
Dictionnaire historique des rues de Paris
, and gazed at all the photographs, but in the open air of Paris, the most brazenly illuminated monument was still a labyrinth on many levels. Even when my French had improved enough for eavesdropping, the crowds on the boulevards and the faces at windows were reminders that a changing metropolis with a population of millions can never be comprehended by a single person.

T
HE ADVENTURES
that follow were written as a history of Paris recounted by many different voices. The book begins at the dawn of the French Revolution, and ends a few months ago. There are also some excursions to the medieval and prehistoric past. It traces the spread of the city from the island in the Seine that was the home of the Parisii tribe to the mushrooming suburbs that inspire more fear today than when they were patrolled by highwaymen and wolves.

The idea was to create a kind of mini-Human Comedy of Paris, in which the history of the city would be illuminated by the real experience of its inhabitants. Each tale is true, and each is complete in itself, but there are also correspondences and crossroads, both literal and mysterious, which serve as landmarks in time and space. Certain districts and buildings reappear at different stages, seen through different eyes, transformed by events, obsessions, visionaries, architects and the passing of time.

No completely accurate map of Paris existed until the end of the eighteenth century, and few people wandered far from their own
quartier
. Even today, the discovery of Paris, or of any great city, entails a degree of disorientation and distraction. A pattern of streets, a certain topographical texture, a combination of climate, smell, building-stone and the flurry of humanity create a particular sense of reality. Every vision of the city, however private or eccentric, belongs to its history as much as its public ceremonies and monuments.

A single viewpoint would have turned these representative adventures into a scripted tour. Narrative devices and perspectives were naturally suggested by a place, a historical moment or a personality. Each tale was written with a flavour of the time in mind; it demanded its own explanations and imposed its own forms of courtesy to the past. Descriptions of the architectural transformations of Paris, the development of its police force and government, its infrastructure and housing, its recreations and revolutions, are there primarily because they serve the purposes of the tale. Nothing has been artificially inserted, and no one–except Baron Haussmann, Adolf Hitler and some Presidents of the Republic–discourses on the evolution of the drainage system or the transport network.

A tourist who follows an uncharted course like a train of thought, only later, after retracing the puzzle of streets on a map, recognizes how much knowledge can adhere to the accidental experience. I have tried to replicate the convenient, mnemonic effect of a long walk, a bus ride or a personal adventure, to create a series of contexts to which more detailed information can be attached. Almost every historian of Paris notes the impossibility of giving a complete account of the city, and I am quite confident of having made this impossibility even more obvious than usual. This book is not intended as a substitute for analytical histories of Paris, some excellent examples of which are currently in print. But it is not as remote from traditional history as it might first appear. It required as much research as
The Discovery of France
, which was devoted to the other eighty-five per cent of the population, and the intention was not to treat hard-won historical data as an amorphous mass of modelling clay. Above all, it was written for the pleasure of thinking about Paris, and I hope that it will be read for the same purpose, which is why an impartial historian should point out that, in the time that it takes to read this book, it would be possible to decipher every gravestone in the Père-Lachaise cemetery, sit at every
terrasse de café
between the Place de l’Étoile and the Place de la Sorbonne, ride a dozen different buses from departure to terminus, or examine every book-box from the Quai de la Tournelle to the Quai Malaquais.