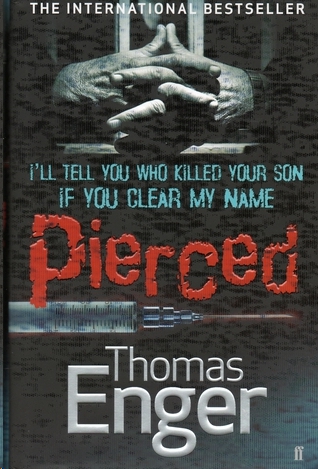 Translated from the Norwegian by Charlotte Barslund

Jocke’s Harley-Davidson is already there.

Tore Pulli parks his motorbike and removes his crash helmet. The gravel crunches when his feet touch the ground. The windows in the old factory stare blindly out into the darkness. The silence is dense and eerie.

Pulli hangs his helmet on the handlebars and walks across to the door. The hinges groan when he pushes it open. He enters warily.

His voice bounces off the walls. His boots slam against the concrete floor. Little by little his eyes acclimatise to the darkness, but all he can see is the naked floor and walls, beams and pillars wreathed in cobwebs. The October wind howls through the panes of broken glass. White clouds of frozen breath pour from his mouth.

It’s almost like the old days, Pulli thinks as he moves forwards. The build-up to the confrontation. He can feel the adrenalin pumping and he likes it.

His eyes are drawn to something lying on the floor deeper into the shadows. He approaches with caution and is met by a pungent smell of urine and metal. He steps in something slippery and has to take a step to the side to avoid falling over. He pulls out his mobile and uses it to light up the floor.

Then he sees what he trod in.

A body lies in front of him. The back of the bloodstained leather jacket has been slashed repeatedly. Above the collar the skull shines brightly through the shaven and tattooed scalp.

He recognises the tattoo immediately. Only Jocke Brolenius has
Go to Hell
tattooed on the back of his neck.

His eyes dart around and he pricks up his ears, but he hears nothing in the profound silence. The room appears to be empty – apart from Jocke‚ a man Pulli loathed with a passion, but didn’t want dead for anything in the world.

He bends down, grabs hold of the leather jacket and turns over the heavy body. The face is contorted and bloody, the mouth is open. Pulli presses two fingers against the artery on Jocke’s neck, but withdraws his hand at once. Though Jocke’s throat is warm, it is also soft and loose like a moist, mangled sponge.

Then he sees it, on the floor. The knuckle-duster.

How the hell did it end up here?

He is overcome by a horrible realisation. A lot of people knew about this meeting, and even more saw him set out for it. Far too many knew that the knuckle-duster hung on the wall in his study. And now he has Jocke’s blood on his hands, his clothes and his boots.

Pulli is about to pick up the knuckle-duster and flee the scene, but he stops himself. You touched the body, he thinks. Your fingerprints are on Jocke’s leather jacket. Don’t make things worse for yourself; it’s bad enough as it is.

He takes out his mobile again. With bloodstained fingers he enters the number of the emergency services to call the police.
You know what really happened
, he says to himself.
Tell them the truth and you’ll be all right
.

You’ve got nothing to be scared of
.

Henning Juul blinks and fumbles for the light switch. The sheet under him is wet and the air quivers with heat. He runs clammy fingers over the scars on his neck and face. His head is pounding with a bass rhythm which is pouring out from an open window in Steenstrupsgate. In the distance a motorbike roars as it sets off, then there is silence. Like the drum roll before an execution.

Henning takes a deep breath and tries to strangle the dream that still feels all too real, but it refuses to go away.

It had started off as a good dream. They had gone outside to play, Jonas and him. A thick layer of snow had covered the ground overnight. At the junction by Birkelunden Park the tramlines were reduced to just ruler-straight silver lines and they could barely make them out. The dense snowflakes were still dancing in the air, but they melted the moment they landed on Henning’s cheek.

He was pulling Jonas on the sledge down Toftesgate and into Sofienberg Park, where the children looked like ants on the small hill sloping down from the church. Jonas threw himself energetically from side to side. Henning was exhausted when they finally reached the top of the hill. He was about to sit down at the rear of the sledge when Jonas stopped him.

‘Okay. But you know that means you’ll have to pull the sledge back up the hill all on your own.’

Henning knew that the wet snowflakes had a longer lifespan than the promise Jonas had just made, but he didn’t mind.

‘Give me a push, I want to go reeeeally fast!’

They counted in unison: ‘ONE! TWO! Aaaand THREEEE!!!’

And Henning gave Jonas a big push. He heard the boy squeal with delight as he got under way and noticed that the other children were watching him too, enjoying the sight of the little boy with the pale-blue woolly hat hurtling towards a jump which someone had built halfway down the hill. And Jonas reached it, gained some height, landed quickly and whooped as he turned the steering wheel to avoid colliding with a girl coming from the side. She turned around and followed Jonas with her eyes as he veered further and further to the left.

Henning saw it too, saw where Jonas was heading, his small fists gripping the steering wheel. Henning started running down the hill, but he lost his footing. He stumbled and rolled over couple of times before he managed to get back on his feet.

The snowflakes, the voices and the din faded into the background as Henning mouthed a scream, but no sound came out. He looked in desperation as the other parents who were also watching Jonas stayed rooted to the spot and did nothing to help him. In the end he closed his eyes. He didn’t want to see it when it happened. He didn’t want to see his son die. Not again.

And Jonas was gone. As were the hill and the snowflakes, the trees and the people. It grew dark all around him. The unmistakeable smell of smoke stung his nose. And even though he couldn’t see Jonas, he had no trouble hearing his cries. Henning waved his arms frantically to carve a hole in the darkness surging in front of him, but it made no difference. The intense heat scorched his face. Breathing became difficult and he started to cough.

A glimpse of light appeared in the smoke. Henning blinked and focused on the opening, which grew ever larger; he could see a door being eaten up by the flames. He coughed again. Then the gap started to close up and soon the smoke covered it completely. It was burning hot and black as night everywhere. And then Jonas started to scream.

Henning exhales at the sight of the flashing red light. His eyes seek out the other smoke alarm in the ceiling. He waits for it to emit its cyclical indicator of rude health. But the seconds pass. And some more. And even more. He feels a tightness creep across his chest and spread out to his shoulders and neck. At last the second smoke alarm lights up. A quick red flash.

He flops back on to his pillow and breathes out while he waits for the monster in his chest to calm down. Eventually it resumes its normal pace. He touches the scars on his face again. They still hurt. Not just on the outside. And he knows that they will keep hurting until he finds out who torched his flat. Who snuffed out the life of the best little boy in the whole world.

Henning turns to the clock on the bedside table. It’s not even 10.30 in the evening. The headache which made him lie down an hour and a half ago is still throbbing. He massages his temples as he shuffles to the kitchen and takes the last can of Coke from the fridge. Back in the living room he tidies away clothes and newspapers from the sofa before he sits down and opens the can. The sound of bubbles rising to the surface makes him sleepy. He closes his eyes and longs for a dream without snowflakes.

‘How long are you going to be? I want to go home.’

Gunhild Dokken leans over the counter and looks across the room. A song by Jokke & Valentinerne belts out from the loudspeakers. Geir Grønningen is lying on a bench, pressing 135 kilos up from his chest while he groans. Behind him, in front of the mirror, a short sturdy man is guiding the movement of the bar with his hands – without helping him.

‘We’ve just got a few more reps to do,’ Petter Holte says without taking his eyes off the bar.

Dokken turns around and looks up at the clock on the wall. It says 22.45.

‘It’s Friday, guys. Friday night, for God’s sake. It’s almost eleven o’clock. Haven’t you got anything better to do?’

None of the men replies.

‘Put your back into it,’ says Per Ola Heggelund who is standing with his arms folded across his chest at the end of the bench. Grønningen has nearly raised the bar above his head. Holte gently takes hold of the bar and assists Grønningen’s trembling arms.