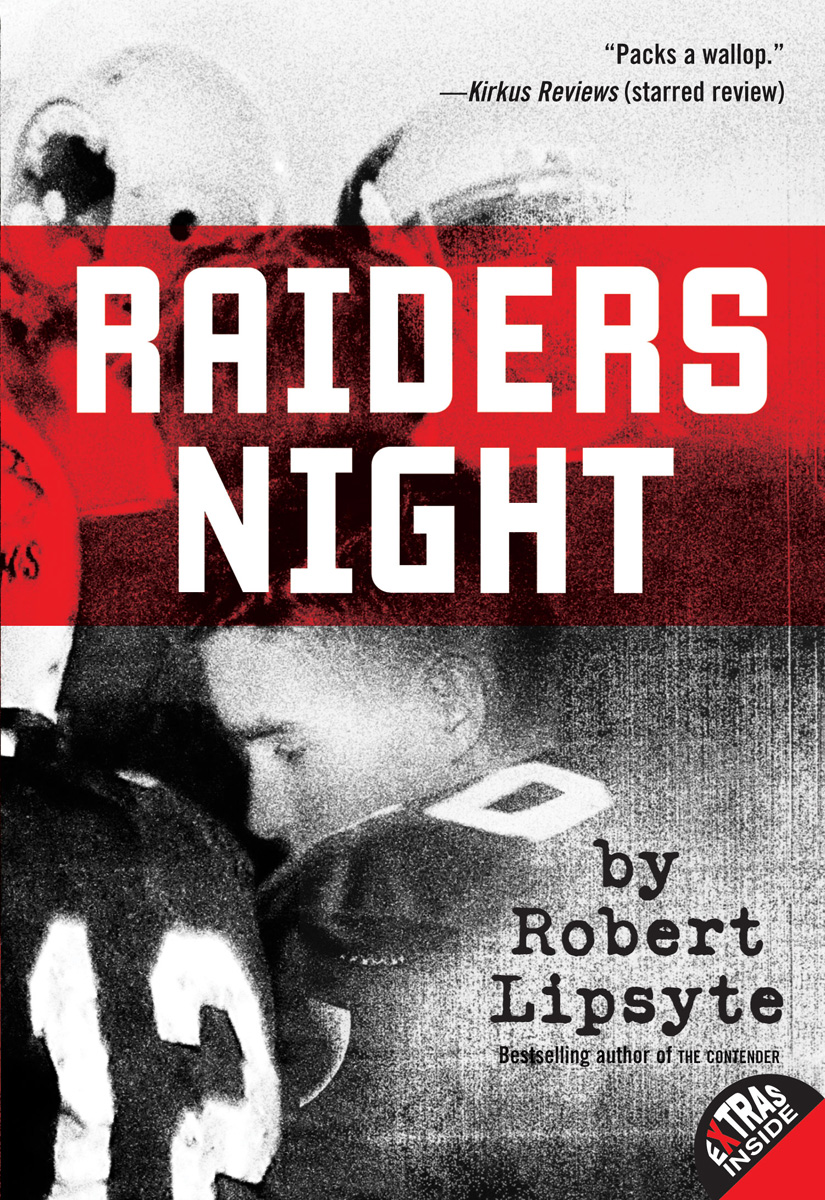 For the teamâ
Kyle, Jessie,
Sam, Alfred, Mimi,
and Lois

The Back Pack hit the gym in the early afternoon,â¦

The softball game had started by the time they gotâ¦

Matt floated into the party a step behind Brody, whoâ¦

He was lost again in the maze of dark streets,â¦

“Your father really cares about you, Matt.” Then Mom added,â¦

Most of the team was already on the bus byâ¦

The kids up front cheered as the bus pulled intoâ¦

By the end of the first day, Chris was theâ¦

The third and fourth days at camp went quickly, asâ¦

Trailed by the linemen, Ramp stomped around the mess hall,â¦

He didn't expect to fall asleep, even with an Ambien.

The Welcome Home rally seemed quieter than in past seasons,â¦

Chris showed up for practice, but he looked pale, thinner.

Brody's parents had begun throwing a barbecue the night beforeâ¦

Matt burst off the line at the snap, racing downâ¦

Sarah stuttered on the phone when he said he'd pickâ¦

They drove around for a while, not talking, listening toâ¦

On Sunday, the e-mails starting piling up from screen namesâ¦

The skybox was bigger than Sarah's living room. It wasâ¦

The pink star glued to the outside of his hallâ¦

He could visualize himself shutting down, an old trick heâ¦

Tyrell always said that the week leading up to Homecomingâ¦

That night, sitting in his room, trying to read aâ¦

The cops talked to Matt and Ramp until their fathersâ¦

Reporters were waiting outside the house, but he opened theâ¦

He was a hero, and it felt bitter and wrong.

Matt was a few minutes early, but she was alreadyâ¦

There was a police officer outside Chris's hospital door, butâ¦

The back door of the field house was open. Corndogâ¦

The hot young moms were long gone and the yuppiesâ¦

Dad was waiting in the doorway. It was almost midnight.

Other Books by Robert Lipsyte

The Back Pack hit the gym in the early afternoon, Matt in the lead, before the yuppies marched in from work, while the young moms were rushing out to pick up their kids from day camp. Matt liked the way their hot eyes roamed over him, wondered if they knew he was still in high school, wondered if they cared. He felt big and hard. Excited. Was it the moms or what was waiting for him upstairs, the iron weights that would make him even bigger, harder. And the juice.

Brody poked him from behind with the football he always carried. “Check the headlights on the one in blue.”

“Someday I'm gonna stick that ball up your ass.”

Matt led them through the downstairs crowd of designer spandex and pastel sweats, cuties perched on shiny machines jiggling away to love songs as they pretended to
work out. What did they know about working out? He liked the sense of leaving their soft world behind as he led the Back Pack up the metal steps into the stink and clang of the second floor, the real workout room.

He was glad they had beaten the linemen to the gym today. Give us a chance to get our session going without Ramp's crap.

The ironheads were there; they were always there, older white guys screaming each other into one more pecbusting rep. They wore tank tops and bandannas that looked like they were soaked in diesel fuel. One of them called out a singsong, half-mocking “Rai-derz.”

The ironheads liked that and banged metal plates. Some of them had gone to Nearmont High and played ball.

“Matt?” The gym owner, Monty, came out of his office and beckoned him over. “New shipment's in.”

Matt nodded and felt the excitement rise. Perfect timing. Load up just before camp so the juice kicks in during the two-a-days when we really need it. He flashed the Back Pack a thumbs-up. Hope they all brought their wallets.

They dressed quickly. They were jittery, psyched for the last heavy workout before camp. Tyrell, as usual, complained about the music on the upstairs speakers, a pounding mix of disco and heavy metal. The ironheads
controlled those CDs. For now. See what happens if we win Conference this year.

Matt caught Pete sneaking peeks at himself in the mirror. Pete was more self-conscious than the rest of them about the pimples on his shoulders. Backne they called it. From the steroids. Price you pay. Pete's girlfriend, Lisa, wasn't so sure it was worth the price. She'd said as much, and Pete listened to her. Girls hear about the side effects, but how could they know the feeling of watching a muscle grow bigger and harder? Pete flexed his biceps when he thought no one was looking, as if to remind himself that Lisa didn't know everything.

Matt said, “Quads and glutes win games.” He wondered if he was taking this captain thing too seriously.

Pete, embarrassed, snapped his shirt at Tyrell, who laughed and danced just out of range. They loved to watch Tyrell move. He had radar. He glided like a phantom. He was the best running back in the conference. If we stay healthy and tight, Matt thought, this could be our season. Maybe State. Senior year, what a way to go.

Out on the mats, stretching, Matt could tell Brody's mind was heading to the same place.

“We got a shot.” Brody's big freckly face had that dreamy look. Probably imagining himself winning the state title. With a quarterback sneak. Not a forty-yard
bomb to me or a handoff to Tyrell, but a heroic scramble out of a collapsing pocket and a desperate lunge over the goal line. Behind his back, some of the guys called him All-Brody. Dad thought he didn't throw to Matt enough. But Brody was all right. Best friend on the team.

“You ready to put the bar where your mouth is?” Matt held up the clipboard with their workout schedule.

They started with squats, lunges, and power cleans to build up their legs and lower backs for the explosive starts off the line of scrimmage. These were the most intense exercises in the daily program the coaches had laid out in the spring. Matt had come to realize that if they left those exercises to the end of the session, they would slack off, especially Pete and Brody. They preferred to work harder on the lat pull downs, the curls and flys to build up their upper bodies for the beach. But they listened to Matt. He was their leader. Tyrell had named them the Back Pack, the four starting backfield seniors. Brody, Pete, and Matt had played together since PeeWee. Tyrell had joined them as a sophomore after he came out from New York, staying at his aunt's house during the week so he could go to Nearmont High.

The linemen stomped in, Ramp bellowing, “Yo, Rydek, your girls done yet?”

Before Matt could respond, Tyrell shouted, “Where you been? Stop off for lunch at the hog farm?”

Ramp cursed, raised a finger, and led the linemen into the locker room.

Matt waited until they were out of earshot. “Chill.”

“Nobody cool says chill no more.”

“Our last season, last chance to win Conference.” He glared at Tyrell until he nodded and started pulling dumbbells off the rack. “Let's be a team.”

Matt and Brody moved to the benches. It took a few reps to clear his head, but once Matt felt the blood pumping again, all the good feelings came back. He concentrated on visualizing his muscles swell and harden as he lay on the bench and pushed the bar up toward Brody's face. Familiar, comforting pains flooded his chest and shoulders as he fought his arms straight under 275 pounds.

“Nice start,” snickered Ramp, his big potato head looming above Matt. “Now put some weight on the bar.” He swaggered off. The linemen would be lifting at least fifty pounds more.

They worked out for two hours, tapering on the
rowing machines, cooling down on the treadmill. They watched Ramp and the linemen scream their way through fifty-pound flys while the ironheads nodded.

In the shower room, they checked each other out. You never look so good as after a heavy workout, thought Matt. Everything looks bigger. Tyrell's shoulders were black bowling balls, his butt was stone. Imagine if he juiced with us. Tyrell said he was afraid of losing quickness. They'd argued over that. Olympic sprinters used steroids and growth hormone all the time. But Tyrell said they just blew ahead straight while he needed to cut and fade. Matt thought it might be about money. Tyrell never had much. In the city, Tyrell lived with his grandmother in a housing project.

Tyrell split when they headed for Monty's office behind the one-way glass mirrors. You couldn't see in but Monty could see out. He opened the door before Matt knocked.

“You're gonna love this stuff,” Monty said as they filed in. He closed the door. “I got a new supplier, Canadian. He puts together stacks for NFL players.”

“How much?” asked Brody.

Monty took a FedEx box out of a metal locker and began unpacking bottles. He spread a clean white towel across the top of his desk and laid out the bottles,
syringes, needles, and alcohol swabs. Monty was in his forties, but he still had the shape of a bodybuilder even if the muscles had shrunk and softened. As usual, Matt was fascinated by his precision. Monty stripped the paper wrappers off the syringes, screwed on the needles, and pulled off their plastic guards with his teeth. He stabbed a needle through the rubber top of a bottle and slowly drew out the oily yellow liquid.

Pete groaned softly. He was solid and dependable on the field, but he always started sweating and swaying about now. Still, he hadn't fainted in more than a year.

Monty flicked a forefinger against a syringe and pushed a drop of liquid through the tip of the needle. “Who's first?”

“Matt's number one in my book,” said Pete, raising a middle finger. He was white as a ghost but trying to keep it together.

Matt loosed the drawstring on his shorts and let them drop to his flip-flops. No underwear in this weather. He bent over the desk. Monty slapped him high on the buttock to numb the skin and rubbed it with alcohol. Matt felt a pinch and a sting as he drove in the needle, then the sensation of something cold sliding into the big muscle.

“This is the Decadurabolin,” said Monty. “Stacked with testosterone. Gonna rip you big-time, man. It's the all-pro cocktail. I'll give you some Danabol pills, too.”

Monty slipped out the needle and pressed the swab on the puncture site. Matt imagined the steroids rushing through his system, finding the muscles, healing them, building them, making them stronger.

Brody pushed Pete forward. He was shivering as he gripped the edge of the desk. Pete closed his eyes as Monty drilled him. The weekly injections turned Pete to jelly, even though his big, soft backside swallowed the needle. Brody didn't seem to notice the shot.

Watching them, Matt felt a surge of brotherhood. He felt even closer to them in here than in the weight room or on the field. Taking the shots proved their commitment to the team and to each other. We'll do whatever it takes to get bigger, get better, to win.

There was a knock at the door, then Ramp's voice. “Yo, Doctor Monty. Ready for the men?”

“Just a minute.” Monty grinned at Matt. “No excuses now. Gonna kick some this season, right?”

“Right,” said Matt. This is our time, he thought.