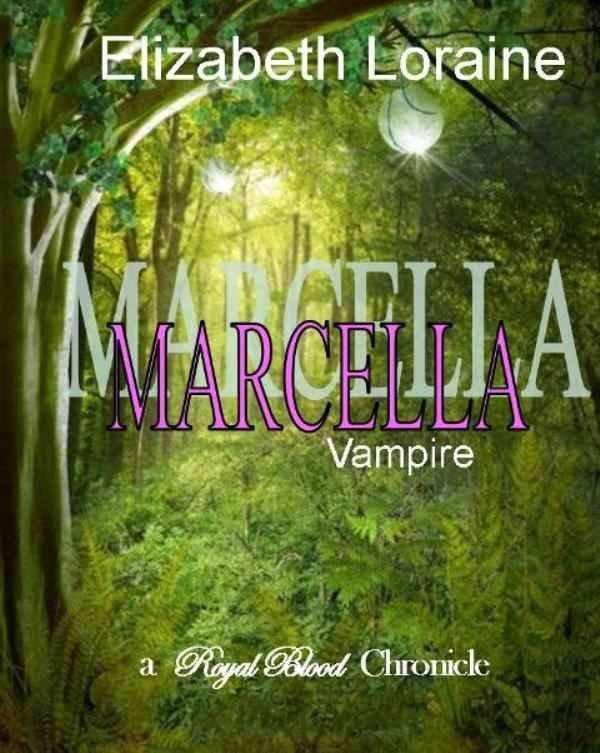 This is a work of fiction.  All the characters, organizations and events portrayed in this novel are either products of the author’s imagination or are used fictitiously.

Marcella copyright © 2012 by Elizabeth Loraine all rights reserved. No part of this publication maybe reproduced, stored in a retrieval system or transmitted in any form or by any means, electronic, mechanical, recording or otherwise, without the prior written permission of the author.

The character of Marcella is introduced in the third book of my series Royal Blood Chronicles and she plays a pivotal part in that story.  Sister of Cain and half sister to Damien she is now part of the larger group known as the Protectors. I received many requests to write more about Marcella and hope that this short story will intrigue you. I hope you enjoy this look at her life that begins following her escape from Althar and after living for a year at Mormont.

I can’t say that I was raised in the underworld. I really only existed. My brother Cain was my only protection for fourteen years until we escaped the underworld Kingdom of Althar and the veil of evil that surrounded and nearly consumed us.

It was because of Damien, our newly found half-brother, that we survived and blossomed in the upper world. The shroud of secrecy surrounding the vampire world was nothing in comparison with what blanketed the dark, red, glowing world below in Althar. Now away from Althar’s influence, I feel free for the first time. Free to choose my own way in this new world. I’m proud to say that I have skills in magic, something quite rare for a vampire.

Oh magic can be taught, but few are truly gifted. So I am proud to say that I have been chosen to perfect my skills in the most magical place of this world; with the High Priestess of the witches, Niranjana.

“Marcella, this will be your room.”

“Thank you, Niranjana. I am so grateful for this opportunity. I won’t let you down.”

“I know you won’t Marcella. We’re so glad to have you, and call me Nira. Samantha will be back any time now. She’ll be your roommate. I have a full class for the first time in many, many years. So many talented young people. Allwain was right; it’s been far too long.”

She smiled, lighting up her light green eyes. “If you need anything I’ll be downstairs. We start classes in a few days. Until then, I just want you to relax and get to know the others.”

“How many are in the new class, Nira?”

Just like that I was alone. The room was spacious. I was still getting used to the world of light. The cocoon of the underworld had released me, but I hadn’t totally released it. Even after a year, I was still looking over my shoulder, expecting evil beings to pounce from every shadow.

The room contained two single beds. Both were covered with white, frilly lace and ruffled coverlets. Since one had a satchel next to it, and a book resting open on top, I sat down on the one to my right.

I had nothing to unpack. In fact, I really had never owned anything. Things were always provided for me and were meager at best. But being ignored all of my life had its benefits too. Left to my own devices I studied magic out of a book that I’d acquired and was able to follow my aunt and hide while I observed as she was taught magic by a Dark Wizard. She was proficient, but didn’t have the natural talent for magic like I do. I would have paid dearly had my hiding place been discovered, or if I had been caught practicing magic, since girls in the underworld were usually not even taught to read and write, let alone anything worth learning.

Since my aunt and my mother were of royal blood, from a powerful family, I was deemed worthy enough to be schooled, and allowed some access to what books we had.

Freedom to learn was one of the most exciting things that happened when I was brought by Damien to Mormont.

Mormont was one of the fanciful castles of one’s dreams and within the safety of its walls there was a library so grand, that even in wildest imaginings I could not have conjured such a place. There were row upon rows of masterfully written prose in glorious gilded leather bindings. Teachings from every continent, and pictures, oh the beautiful full-color pictures.

Even now thinking of it makes me swoon. The scent of it still lingers in my head.

The doorknob twisted causing me to look in that direction. In walked a gangly, young girl. Short wavy, red hair covered her head like a cap. Her freckled face with refined features was round, there was sweetness to her scent, and her golden eyes smiled.

“Oh, hello. Nira said I’d be getting a roommate. I’m Sammy, it’s short for Samantha, but no one but Nira ever calls me that.”

“Marcella, nice to meet you, Sammy.”

She walked closer, she squinted her eyes as she appraised me. “I’d call you Marcy for short, but you don’t look like a Marcy.” She thought for a moment, tapping her finger on her chin. “How about Cella?”

She smiled. “Cella it is. I was just out gathering mushrooms. I could show you around if you like. It’s just about lunchtime. We can meet the others afterwards.”

We walked through the magical house together.

“The colors change as we walk!”

“It reflects your aura. You’re very positive aren’t you? See the walls around us are pink. That’s you. I’m yellow, inquisitive.”

“I’m Richard. Samantha insists on giving everyone a shorter name.”

“I like my shorter name. Nice to meet you, Richard.”

Richard was tall and dressed simply in black pants and shirt. I was used to handsome men. Vampires all tended to be very good looking, but this warlock was really amazing. His sculpted features and copper eyes made me feel weak. His smile created the cutest deep dimples in his cheeks.

Sammy sighed. “Come on Cella,” she groused. “Happens every time,” she said under her breath. “See you at lunch, Richey.”

She shook her head, still mumbling as she pushed by Richard.

“We’ll have plenty of time to get to know each other better. I’ll save you a seat at lunch.”

All I could do was smile and nod. As my face began to warm, I walked quickly away so he wouldn’t see how much he had affected me.

“You’ll get over it,” Sammy said, once we were out of Richards’s sight.

“He has that affect on all the girls. He’s my cousin by the way.”

She must have noticed the questioning look on my face. “I know, we don’t look anything alike. I’m the ugly duckling of our family. Everyone else looks like Richey.”

“You are not ugly, and even if you were truly an ugly duckling, it just means your destiny was to be a beautiful swan.”

She shook her head again. “Look at the walls, they’re
all
pink now. We’re going to be really good friends, aren’t we?”

“Yes, I think you’re right. Sammy, am I the only vampire here?”

“Well vampires usually aren’t very magical beings. They have other talents. So yes, you are the only one. Three witches, two warlocks and one high elf, and you of course.”

“They have their own school.”

“I can’t wait to show you the forest. It’s my favorite place here.”

We walked out the door and I turned to see the beautiful Tudor style cottage, with its thick thatch roof, begin to fade from sight. I cast a glance over to Sammy who just smiled.

“Don’t worry it’s still there, it’s just blended into the background now. Let’s go down to the lake.”

“That sounds nice. I’m just happy to be outside in the fresh air with a blue sky overhead.”

Sammy stopped and frowned. “What color sky did you have?”

“None; I grew up in Althar. It’s the upper kingdom of the underworld.”

Sammy’s mouth dropped open. “That’s amazing. Oh you have to tell me all about it.”

“I didn’t mean to upset you. It’s just that I’ve never met anyone that has been to the underworld before.”

“Well, not many get out. Which way to the lake?”

“Out of the corner of my eye I saw movement behind the large trees just off the path.”

“I think we’re being followed,” I whispered.

“Probably one of the Fae,” Sammy said dismissively. “There are several different kinds that live here. They just watch. I have yet to be able to engage one in conversation. They always run off. Don’t worry, nothing here is dangerous.”

I turned and looked again. A young man was peeking around a tree. His large brown eyes met mine, and he smiled mischievously before he disappeared into the protective blanket of the forest.

The canopy of trees was welcoming and safe. It felt like the mother’s arms I’d always longed for. As the path twisted through the forest, shafts of light painted the ferns below shimmering gold. I took in all the scents, and reveled in the sheer bliss of it.

Finally the lake came into view.

“Looks like others had the same idea. Luke, Morna, meet Cella, she’s the newest arrival.”

Marbeck and the King-in-Waiting by John Pilkington
Saving Faith by David Baldacci
Marriage Behind the Fa?ade by Lynn Raye Harris
JACK KNIFED by Christopher Greyson
Battling the Gods: Atheism in the Ancient World by Tim Whitmarsh
Byrne's Dictionary of Irish Local History by Joseph Byrne
Crazy Thing Called Love by Molly O’Keefe
Hearts Across Time (The Knights of Berwyck: A Quest Through Time Novel ~ Books 1 & 2) by Sherry Ewing
Vintage Love by Clarissa Ross
The Cinderella Hour by Stone, Katherine