Read Remember Me This Way Online

Remember Me This Way 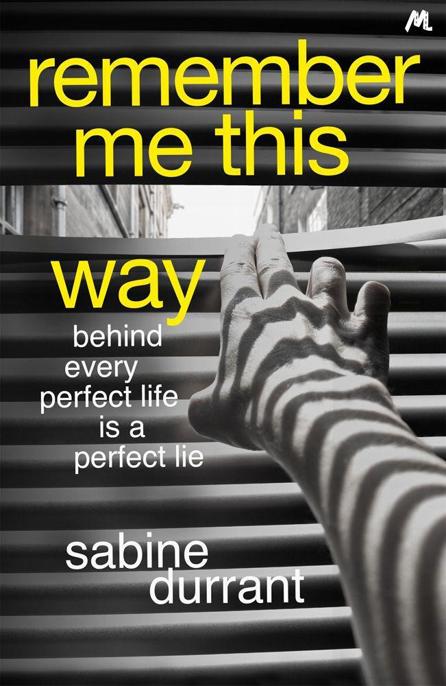 Having It and Eating It

Remember Me This Way

First published in Great Britain in 2014 by Mulholland Books

An imprint of Hodder & Stoughton

Work has been asserted by her in accordance with the Copyright,

‘I am beginning to understand why grief feels like suspense.’

I stood on the common and watched her up in the school library. The lights were on and she passed by the window twice. The third time, she leaned her elbows on the sill and looked out. She seemed to stare straight at me, though I knew I was hidden, my back pressed against the tree, my face concealed behind a web of branches. I had it in mind to step forward when a man came into view behind her, and as she turned, I saw her laugh, a chink of white throat. I imagined his lips then in the dip of her neck, where the vein throbs, her eyes closing, his hands on the swell of her breasts.

She has no one to blame but herself.

A deep breath. Petrol, manure, the mineral tang of salt. I’m not that far from the sea, even here. My face is damp from the drizzle and the spray of tyres on wet road. I’m gripping the flowers in both hands now, like a bride. I chose hyacinths, though I wasn’t sure – blue ones only. Zach told me you should only ever have one colour in a bunch. I’ve wrapped the stems in wet kitchen roll and secured them in a small freezer bag. Either I made the paper too wet or there’s a small hole in the bag, because water is seeping out. It’s dripping down to my elbow.

Over the road, I can see a slope of grass, a copse of blunt trees, the shadow of a hill behind. Above that, sky the colour of dirty sheep, darker patches, a dribble of falling sun in the distance as the cold afternoon closes in. I am concentrating hard on all these things, because I know that somewhere in the corner of my vision, across the carriageway and away to the left, is the spot. But I’m not going to look. Not yet.

It is Valentine’s day, exactly a year since my husband’s car crash, and I am two hundred miles from home beside an A-road in the middle of Cornwall. This trip is an ending or a beginning – I’m not quite sure which. It’s time to move on. People tell me that all the time. I’m trying to believe them.

I pick my moment between the streaming cars and run. When I reach the far side, I look back at the lay-by where my Nissan Micra sits, rocking in the backdraught of the passing lorries. My dog watches me from the side window. I’ve had a feeling since I parked that I’m being shadowed. It’s probably just the remoteness of the place; so many people driving past, no one else stopping. Or it’s guilt – guilt about all sorts of things, but mostly that I should have come sooner.

It’s conventional to visit the scene of a fatal accident, to leave flowers: all those lamp posts decked with cellophane where poor cyclists have been killed. It’s less usual to leave it this long. The night it happened, when PC Morrow came to the door, she would have brought me here straight away. The patrol car was waiting. My sister Peggy stopped me. She told Morrow I needed to go home with her, not drive five hours to a wet, windswept Cornish roadside, to smoke and wreckage. It would be insane, she said. I could go another time. Zach was gone. There was nothing I could do.

And it wasn’t as if I didn’t know what happened. Morrow, fresh from her Family Liaison training, went over it again and again. I understood about the lethal combination: the sea fog and the wet road, the sharp bend, the soft-top roof, the bottles of his favourite distillery-only whisky on the passenger seat, the oil paints, the solvent-soaked rags in the boot, the thick trunk of the tree – the disastrously placed tree.

I kept putting it off. People understood. Cornwall was Zach’s favourite place. He had a house down there that would need sorting out; they assumed I would get to it in my own time. But then, in the days and weeks that followed, I began to dread it – seeing the emptiness of his bungalow, feeling the loss of him all over again.

I feel a shiver up my back. The clouds are thickening. A gust whips my coat. I must hurry up, get this done, return to the car before it gets any darker. A motorbike, overtaking a lorry, howls. I step back. This thing that had seemed so necessary when I was two hundred miles away has started to feel mad, reckless.

I pick my way along the narrow crumbling shoulder between the white line and the barrier. One foot in front of the other. That’s how you get through – everyone tells you that. One step at a time. I focus as hard as I can on the littered ground: a hamburger wrapper, smeared with ketchup; a used condom, oddly bright in the polluted grass. A polystyrene cup, lodged in the barrier, flips and flaps every time a car passes. As I near the bend, a horn blares – in anxious warning maybe, or perhaps in astonishment at the madwoman in the road with her hands full of flowers.

When I get there, I’ll put the hyacinths down flat at the base. Is that right? Or do they need to be higher? Perhaps I should have thought more about it, brought Sellotape. Zach would know – though he’d hate me for coming. He would take it as an insult, not a tribute. He hated sentimentality. He didn’t even like anniversaries. He’d think I was giving in to cliché, or to the advice of others. ‘Who’ve you been listening to, Lizzie Carter?’

I can sense the tree’s form now, its arms veined against the grey sky. I reach the frayed slash in the hedgerow. Pale green shoots on the tip of each twig. It’s callous, the way this hawthorn has regenerated, the way it has bounced back. I glance behind once more and then I hoist myself over the crash barrier, and there it is: the tree, an oak, oddly dignified despite the deep gash in its gnarled bark.

Zach’s tree. I reach out to touch it, to feel the rough grooves of the bark with my fingers. I rest my head against it. My eyes fill.

My friend Jane didn’t think I should come on my own today. I made her laugh to prove I could cope. I put on a funny voice and talked about my ‘ceremonial visit’, my ‘ritual deposit of floral tribute’ – phrases from the self-help book my sister gave me. I didn’t tell her the whole truth – how complicated my grief is, how murky; how, more than anything, this is about laying ghosts.

Is all grief so confused, or is it just my particular misshapen form of it? There are days I accept his death and I move through the world as if underwater. Ordinary tasks, like filling the dishwasher, or sending off bills, feel brutal and empty. I resent the pigeons nesting outside the bedroom window; the schoolkids at the start of the term in their new uniform. I can be sideswiped by the smallest of things. I saw a white bike helmet on the head of a man cycling down Northcote Road last week and a wave hit me with such strength, my knees buckled. I had to crouch for a bit on the pavement outside Capstick Sports. Other days, I forget. I am almost carefree, relieved, and then I am overcome by feelings of such intense shame I don’t know where to put myself. I succumb to lethargy and depression. I put things off.

Standing here, I feel close to him in a pure way. This was the point of coming. His death feels real for the first time. I must let him go, hard as it is, because, despite everything, he was the love of my life. Peggy is right. He was the man I have spent most of my life loving – the most minutes, the most hours, the most days, the most time. I close my eyes, blink my tears away, and wonder if I can now let my restless thoughts lie.

Something crackles beneath my foot, and I look down.

Propped against the roots is a bouquet of flowers. Casablanca lilies, formally wrapped in cellophane, secured with a large purple ribbon.

I step back. Another accident in the same place: that’s my first thought. A black spot. The curve of the road, and the unfortunate lie of the land. Another night of fog, perhaps. More rain.

I’m disconcerted. I don’t know where to put my hyacinths. The lilies look so professional and important. I stand there, wondering what to do. I’m not sure Zach, despite his contempt, would want to share. So it’s a moment before I even see the note. It’s white. Someone has drawn a large heart with a name – I tilt my head:
X E N I A
– spelled out around it. And at the top, in big black letters, it reads:
For Zach
.

And for a moment, honestly, I think: what a coincidence. Someone else called Zach has crashed and died here. Did they, to use PC Morrow’s verb, ‘fireball’ too?

And then, as the truth settles, I lay the flowers down meekly, to the side. I rise and, in a trance, pass again through the gap in the hedge, over the crash barrier, and I’m heading along the road the way I came, empty-handed, head down. It’s only when I look up that I see another car – a silver SUV, right up close behind the Micra, tight against its bumper.

A knot begins to press at the top of my spine. I try to run back across the road but my legs feel weighted, drugged. Cars are coming from behind. A horn blares. My skirt is flapping, trails of scarf whip around my face. Brakes squeal, another horn sounds. A rush of air and spray.

I fumble at the car door, hurl myself into the seat, greeted by the dog, his wiry lurcher body, licking and wriggling and trying to get away from me all at the same time. In the rear-view mirror I watch the SUV pull out, catch the hunched form of the driver wrestling the wheel. He must have stopped to check directions, or take a call. Mustn’t he?

Honeysuckle Love by S. Walden
Deadly Code by Lin Anderson
Mercy by Daniel Palmer
Finding Casey by Jo-Ann Mapson
All I Need Is You by Johanna Lindsey
You Don't Own Me: A Bad Boy Mafia Romance (The Russian Don Book 1) by Le Carre, Georgia
The Hop by Sharelle Byars Moranville
Are You Loathsome Tonight? by Poppy Z. Brite
Pinpoint (Point #4) by Olivia Luck
Suite 269 by Christine Zolendz