Read Stepbrothers Stepping Out: With His Partner Online

Stepbrothers Stepping Out: With His Partner 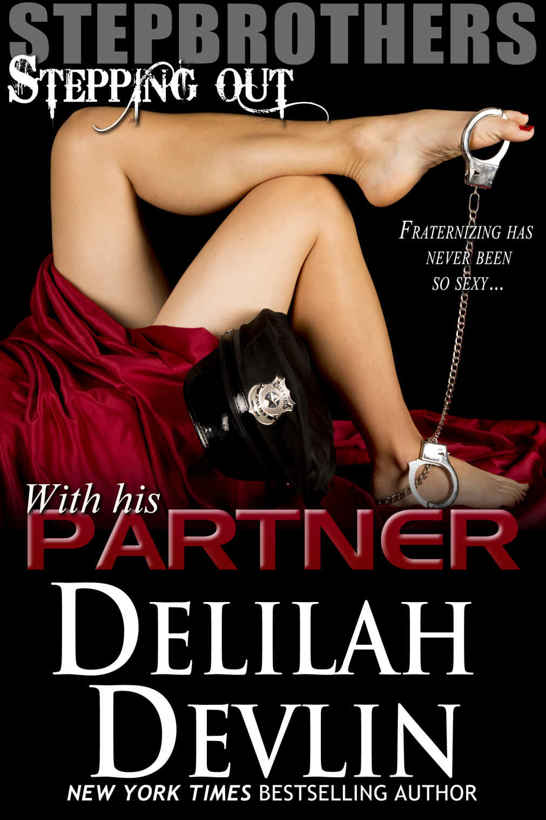 Fraternizing has never been this sexy!

Note: This original 6600-word short story may be short in length, but it’s not short in passion!

For more short stories by Delilah Devlin, check out:

Dreaming by the Sea

Night at the Wax Museum

Tailgating at the Cedar Inn

The Pleasure in Surrender

If you love vampires, werewolves, and things that go bump in the night, check out her NIGHT FALL series:

Silent is the Knight

About
Stepbrothers Stepping Out

Stepbrothers Stepping Out:
With His Partner

Stepbrothers Stepping Out:
With His Partner

A
n ominous creak
sounded on the porch outside, and I quickly grabbed the TV remote to turn down the volume. For the umpteenth time that night I trained my ears to pick out any suspicious noises from the
many
unfamiliar sounds that continued to freak me out in my new place.

I picked up the phone, always close at hand, and contemplated calling Matt. He’d come in his uniform and make enough noise outside that the whole neighborhood would know I had a cop on speed dial. Then he’d come inside and make a big show of checking the closets and under my bed, just like he’d done when I was kid.

Worse, he might bring his cute partner, and once again Logan would be reminded I was a nut bag who jumped at every creak in the floorboards.

As the noises continued, I dipped beneath the afghan blanket and pulled it up to my neck.
I’m twenty not seven. Get a grip. I can do this.

A skittering of tiny feet sounded from the kitchen. “What the fuck?” I bolted from the couch and quickly hit my brother’s number.
I’m seven. I’m a wuss. Matt, please answer.

Since they’d just
finished their shift, both men showed up in their dark uniforms and tromped through the house, checking every place an intruder could hide, naturally coming up with nothing, and cracking jokes about my housekeeping skills.

“It’s no wonder the house creaks. It’s trying to escape.”

“Ha Ha.” I rolled my eyes at Logan whose gaze was expectant. I was beginning to think he liked annoying me, just to see my reaction.

Matt emptied the contents of the paper bag he’d brought inside onto my counter.

I stepped closer to peer over his shoulder. “What’s that?”

I grimaced, eyeing the trap. “I want him caught, not tortured.”

“Tough. Don’t you worry about a thing, Jenny. I’ll place it out of sight and check it for you.”

I gave him a glare for using that tone. The one that implied a patronizing pat on the head. When would he see me as more than just his annoying little sister?

Logan stood behind him, his mouth tightening as though trying not to smile.

I narrowed my gaze at both men. Now that I knew I was safe, I could be my bratty self. I flounced onto the couch, suddenly aware I’d been standing around in large t-shirt that ended at mid-thigh, and that my breasts were beginning to tingle. In another moment, my nips would spring, and then they’d both get a hint of my innermost secret. I pulled the afghan up to my shoulders.

But rather than leaving right away, the two men sat on either side of me, both wearing smirks.

Matt tucked a finger under my chin and turned my head toward him. “You need a roommate. If you were busy in the evenings, you wouldn’t get so edgy.”

I snorted. “I tried that in college. I don’t get along well with other girls. They’re too catty.”

I turned to study his expression, which quickly shuttered. “Why would they be jealous?” I asked, pretending innocence, just because I wanted a compliment, something to tell me he might be even a little bit interested.

“Don’t be coy,” he said, shaking his head. “You know you’re gorgeous.”

It was the first time Logan had said anything about my appearance. I’d begun to think he just wasn’t into my type. Apparently not. His face might not be giving much away, but his gaze was sliding over me. Slowly.

Warmth crept into my cheeks. Did Matt know Logan was interested? Did he care?

My naughty fantasy, the one I frigged myself to nightly, suddenly didn’t seem so impossible—if only Matt saw me as an attractive, available woman, too.

Matt cleared his throat. When my gaze darted back, he was giving Logan a dark frown.
Interesting
. Not one to waste an opportunity, I let the afghan fall to my lap and stretched my arms high above my head, arching my back as I drew in a deep breath, knowing my breasts pushed against the thin cotton, and there was no way they could miss the outline of my areolas, much less their spiked tips.

When I lowered my arms I glanced left then right. Logan’s mouth was crimped again, and his gaze was boring into mine.

Matt’s expression was impossible to read. “We better head out, Logan.”

“Yeah.” Only Logan didn’t immediately move. “You going to be okay?” he asked, his voice softening to a lovely, deep rumble.

“I’ll be fine,” I whispered. “Thank you for coming to my rescue.”

The cushions lifted on my other side, and I glanced slowly up Matt’s body. My breath caught as I stared at the thick ridge riding the inside of one thigh. Was I making him hard?

Matt cussed softly under his breath.

Logan chuckled and paused to give me a brotherly hug before rising and heading to the door.

Alone, I stood beside my stepbrother. His gaze was roaming my face, his heavy brow was furrowed. “You got this handled?” he asked, his voice sounding slightly raspy.

“I’m getting there,” I said, then rose on tiptoe and aimed a kiss at his cheek, which he leaned down to receive. At the last moment, I changed direction and kissed his mouth.

He held still, and then his lips returned the pressure for about a second before he gripped my waist and set me away. Without speaking a word, he strode quickly toward the front door.

The next day,
I arrived home early from work to find “the boys” in the kitchen. They were both on their knees and reaching under my sink, a package of steel wool open on the floor between them.

I liked the view so much I leaned against the doorframe to look my fill. They made a lovely pair. Matt’s appearance was more rugged—a square jaw, blunt nose, dark green eyes, and thick, brown hair with a hint of curl. While Logan could have been a handsome underwear model, if male models looked smart and had wicked gleams in their blue eyes. His dark blond hair had a cowlick in front which made him even more adorable.

Both men were in great shape, something my body appreciated. Heat swept over my cheeks. My breasts began to tingle. Both stood over six feet tall with broad shoulders and slim hips—and nice tight asses. Both were wearing form-fitting jeans and tees. If either of them were mine, I’d walk right over and slide a hand between their legs to cup their dicks. Wouldn’t they be shocked if I did it now?

Grinning, I gave a low whistle.

Matt jerked and bumped his head against the top of the cupboard.

Logan pulled out and gave me sexy look—one eyebrow hiked and a half-smile curving his mouth. “Jen, you’re home early.”

I stepped deeper into the kitchen as Matt turned and sat on the floor, watching me with a dark-eyed glare.

“You get fired already?”

“Of course not. My boss loves me. He gave the rest of the afternoon off seeing as how I’ve been working so hard lately.” So maybe I slapped the sultry on just a little thick, but now I knew Matt was wondering just what sort of service I’d been providing my handsome employer. Never mind he was gay. Matt didn’t need to know. And I loved the way his jaw sawed tight.

I sauntered inside and headed to the refrigerator. Flipping back my long hair, I bent to reach for a beer in the back of the bottom shelf, knowing my short, slim skirt rose, and since they were on the floor, now they both knew I was wearing pink panties.

I straightened, popped the top and took a deep swig. “You catch that mouse?” I asked, giving them an innocent look.

By their narrow-eyed frowns, it didn’t look as though either of them was buying the act.

My face flamed. “Guess I’ll go get a shower.”

Matt turned to Logan. “I wasn’t just imagining it.”

Logan shook his head. “No, she’s been hitting on both of us, bro.”

Their gazes turned slowly, and I backed up, bumping against the doorframe. “Hitting on you? Seriously?” I opened my mouth to make more denials, but they were smiling—wolf-like—and their gazes homed on me.

Feeling like prey now, I pointed behind my shoulder. “I’ll just leave you both to whatever it is you were doing.”

Whirling away, I moved quickly down the hall to my bedroom door, but footsteps trailed behind me. Not moving as quickly, but with their long strides, they didn’t really have to.

A hand caught my arm, and another reached out to shove my bedroom door wider, then I was marched to the bed.

Glancing sideways, I noted Logan had me. Shock sent a chill through me. Why was Matt was letting him manhandle me? But before I could protest, Logan sat on the mattress and pulled me over his knees.

“Since you didn’t mind flashing your panties in our faces…” He flipped up my skirt.

I gasped and reached back to push it down, but he caught my hand and drew it past my head, stretching me out.

“Go ahead and lose the panties, too,” Matt said, his voice tight. “Make sure she feels the sting. It’s the only way she’ll ever learn her lesson.”

Only I was wriggling so much, another set of fingers plucked at the satin and drew them down my legs. My shoes hit the floor.

With my boobs riding Logan’s outer thigh and my ass bared, I felt overwhelmed, a little scared about what they’d do next. But in the next instant, I realized I was also completely thrilled. Liquid drenched my pussy.

Logan placed a hand on one cheek. “You shouldn’t tease a guy like that, Jenny.” The hand lifted.

I held my breath. Was he really going to—

The slap wasn’t one you gave a child. It stung. My breath hitched, and before I could cuss, another landed, and then another. I pushed up with one hand on the mattress and tried to roll off his lap, but Matt knelt in front of me and held my shoulders.

The Perfect Deception by Lutishia Lovely
Anita Mills by Newmarket Match
When to Rob a Bank: ...And 131 More Warped Suggestions and Well-Intended Rants by Steven D. Levitt, Stephen J. Dubner
Coveted by Shawntelle Madison
Building From Ashes by Elizabeth Hunter
The Book of Dead Days by Marcus Sedgwick
MacLarens of Balmorie 05 - Once Upon A Time In Scotland by Kam McKellar
Football Genius (2007) by Green, Tim
Beyond Eden by Kele Moon
Wine of the Gods 08: Dark Lady by Pam Uphoff