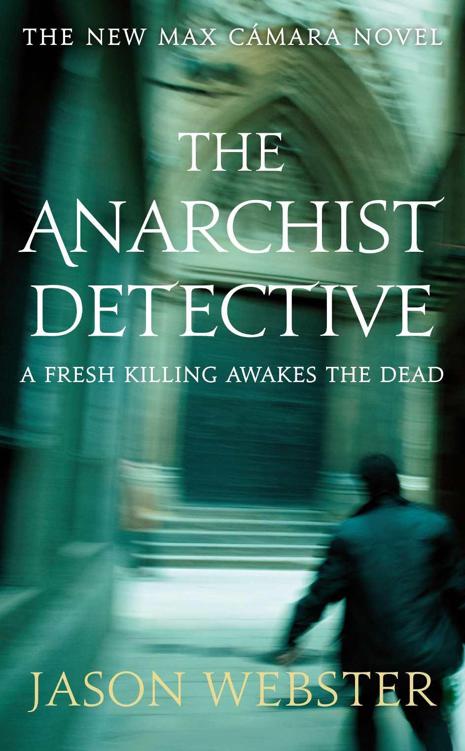 Sent on leave after his last, brutal, case, Max Cámara returns to his home town in La Mancha, famous for producing the finest saffron in the world.

There, the past keeps pulling at him. The town is exhuming a mass grave from the Civil War, but why is his grandfather behaving so strangely? His old friend Yago is investigating a particularly nasty murder which sets off memories Max has been trying to bury for years. And then there are Yago’s whisperings about a saffron mafia...

Max finds himself plunged into the thick of a complex and intensely personal case that will put him in severe danger and have him questioning his past – and his future in the police.

Brought up in England, Jason Webster has lived for several years in Valencia, the setting of his Cámara novels. His acclaimed non-fiction books about Spain include
Duende: A Journey in Search of Flamenco
and
Sacred Sierra: A Year on a Spanish Mountain
. His first Cámara crime novel,
Or the Bull Kills You
, was longlisted for the CWA Specsavers Crime Thriller Awards New Blood Dagger and was followed by the equally acclaimed
A Death in Valencia.

Duende: A Journey in Search of Flamenco

Guerra: Living in the Shadows of the Spanish Civil War

Sacred Sierra: A Year on a Spanish Mountain

Or the Bull Kills You

A Death in Valencia

For Tanya, with love

Any life is made up of a single moment, the moment in which a man finds out, once and for all, who he is.

In addition to these national forces, towns and cities tend to have a local police force – the
Policía Local
, also known as the
Policía Municipal
. This deals with smaller crimes, official engagements and traffic duties, and is under the control of each respective Town Hall. A member of the
Policía Local
may sometimes be referred to as a ‘
Municipal
’.

Any member of these respective police forces are said to be belonging to the
Policía Judicial
if they are acting under the orders of an investigating judge.

He’s seen dead bodies before, plenty of them. But never like this.

Slowly, for fear of breaking them, the bones are uncovered, exposed and finally liberated from the earth.

Over two hours have passed since he arrived, watching every step of the delicate operation. And his eyes have barely wandered as the shape of the corpse has gradually emerged. Excavators and forensic scientists work below in the pit, their movements calm and unhurried: this takes patience, and while it is important to uncover and collect every clue, respect for the dead as much as professionalism creates a hushed, almost church-like atmosphere.

A flash goes off from time to time as the photographer records their progress. From a distance, a handful of visitors to the cemetery tiptoe around the makeshift wire fencing designed to create a sense of privacy for this sacred act. What’s happening here is an important story for the city, but many will be content to catch a glimpse of it on the local television news: a cameraman and reporter are setting up now.

A short break. The forensic team are discussing how best to carry on – whether to concentrate on this one body or extend the digging area and perhaps reveal more of the dead gripped by the greedy fingers of the soil.

He lifts his gaze and looks around at the walls of memory surrounding them. Cemetery names etched on metal plates bolted to niche coverings; an occasional black-and-white photo in a rusty iron frame; some dried flowers tied to a railing; others fading in the sunlight, their nylon petals only providing a temporary permanence against the elements.

Until this moment there has been no record, no remembering of this man lying a few feet away in the ground. No plaques, no tearful relatives, no flowers of any kind. No years of honouring his name and life: small yet important steps to ensure that his death did not mean immediate forgetting and silence.

No. This man was extinguished and cast into a nameless pit. His existence blotted out, as though he had never lived, should never have lived. And for years the earth had kept its promise, never speaking a word, never letting on about the secret lives and deaths it held close to its breast.

Except that it never was a true secret. There was always someone who knew, someone whispering, someone who could point to the guilty.

It has taken years, but now, finally, it is time to see, to show and to speak.

The excavators begin again, deciding to continue working on this first body. With brushes and small scrapers, they resume the task of removing the dirt that has compacted around his sullen bones.

A patch of fraying material covering what was once a shoulder begins to push up into the sunlight. The team moves on, along the breastbone towards the deformed sphere of a head. A few stiff hairs begin to show through the mud. One of the team bends down and carefully cuts a few strands and places them with pincers into a transparent plastic bag. She holds them up to the light, then passes them to a man standing at the edge of the pit, who examines them before placing the bag in a metal briefcase.

More minutes pass. There would once have been a face where their tools are picking and smoothing away, he thinks. Now it is a featureless skull: no smile or frown, no worry lines on the brow, no shining eyes. Just holes. And a few teeth.

Activity around the corpse’s face intensifies: the team have found something – something that might help identify the person who once lived in these bones. He peers in, but the excavators’ bodies block his view.

He looks up at the cold, cloudless November sky. No birds, no wind, not even a plane cutting through the blue. Was he right coming here? Perhaps he should have stayed at the hospital. But he wanted to see for himself. There is no one else to mark this moment. Only him. He is the last of them, the last of the line. Not long, and he might be entirely on his own.

The man with the metal briefcase is talking to the team leader again. He nods as she comments on what they’ve found near the dead man’s face. After a moment, he gets up and walks over.

‘Glasses,’ the man says. ‘The same model, the same shape as the ones in the photograph.’

‘And the hair? That was his hair you were looking at earlier on.’

Neither of them speaks for a moment. He looks over again at the body.

‘A DNA test will tell us for sure. We can take a sample from you now. Then we’ll do the procedure, just to be a hundred per cent. But it will take a few weeks.’

The man puts his hands on his hips and looks over at the body.

‘But for my money, that’s him. That’s Maximiliano Cámara.’

He turned and saw a small, badger-like woman shuffling along the corridor towards him.

‘I saw you coming. The window looks over the entrance.’

‘He was on the kitchen floor, couldn’t move.’

‘And he’d messed himself. I had to clean that up. But they were quick about it. Only five or ten minutes after I called. I didn’t like to tell anyone, the neighbours. But what with the sirens, and them banging up and down the stairway, well, of course, people hear noises, and they open their doors to see what’s going on. I had to tell them something. Said he’d taken a turn. Didn’t know myself for sure till the doctor said. But I did wonder, when I saw him, saw that he couldn’t move properly. I thought, this looks like one of those
embolias
.’ A stroke.

An orderly was slowly pushing a cleaning trolley down the corridor, preparing for a final sweep and mop before leaving the ward in the hands of the night shift. Cámara glanced up at a clock on the wall: it was gone eleven.

‘I came straight from the station,’ he said.

‘I rang you as soon as I got a chance. Had to get him here and make sure he was all right first. I didn’t know . . . well, I didn’t know if he was about to head over to the other
barrio
.’ To the other side.

She frowned at him.

‘It’s them funny plants he’s got growing on the patio, Max. They’re evil. And they make the flat smell appalling. It’s just not right. You should know, being a policeman. You should arrest him. I know he’s your own grandfather, and he brought you up, but it’s the only way. It’ll just kill him otherwise.’

That being arrested might change Hilario’s views on anything brought a fleeting smile to Cámara’s face. But he was anxious to go in and see his grandfather; he was still alive, that much was clear, if little else was.

And Pilar should head back home. Their housekeeper had been with them since the beginning, since Cámara had moved in to live with Hilario as a shocked, angry twelve-year-old, and she was the closest he had to an extended family in Albacete – a bustling, dark-eyed widow, coming and going from the flat at will, cleaning, cooking, tidying, and prodding them along, fulfilling a role she felt she had to perform in the absence of any wife or mother in the house. She had no family, and neither did they, and so the three of them had made a curious trinity.

Cámara looked in the direction of Hilario’s room.

‘Is anyone in there with him now?’

‘No. The doctors came this afternoon. They stabilised him, or something. Gave him pills to clear his blood. Because it’s a clot. Gets into the brain. But they say he’s all right now. Got him under observation. On his own in there, which is nice. You don’t really want to be sharing a room when you’re not feeling good.’

‘Oh, yes, it’s fine. They seem to think the company does him good. Familiar people, like me or you. Helps him, they said.’