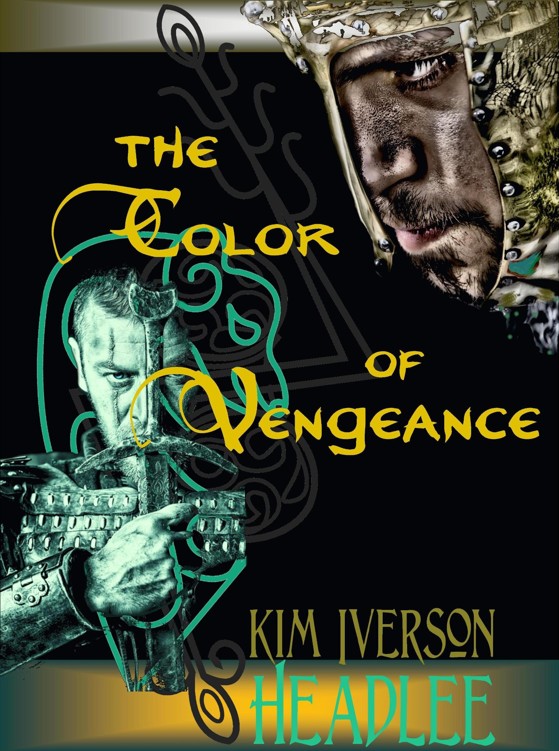 Credits for the photographs on the cover:

This is a work of fiction. Names, characters, places and incidents are products of the author’s imagination or are used fictitiously. Any resemblance to actual events or locales or persons, living or dead, is entirely coincidental.

All rights reserved, including the right to reproduce this story or portions thereof in any form, with the exception of brief excerpts for the purpose of review.

This e-book is licensed for your personal enjoyment only. This e-book may not be resold. If you’re reading this book and did not purchase it, or it was not purchased for your use, then please purchase your own copy. Thank you for respecting the hard work of this author.

P
RINCE BADULF, SON of King Colgrim of Bernicia, studied the slumbering Brædan village sprawled in the valley below and waited.

Being cramped behind cold boulders and winter-stripped thickets on the hillside, the night wind freezing one’s ballocks and whipping the breath away—this part never made it into the songs.

Minstrels preferred the warm, soft luxury of the king’s hall. Details gleaned from the war-bands therefore were sketchy in some places and embellished in others.

What of it, after all? No harm in heaping an extra measure of glory upon a warrior’s name. If omitting the tedium won more young hearts into the war-bands, so much the better.

At least the flurries had blown off, though the obsidian sky portended a colder wait. Tucking his gloved hands under his armpits, Badulf returned his gaze to the sliver of moon, willing it to slip faster behind the dark breasts of the far hills.

There would be sentries to get past, of a sort, but farmers with pitchforks and scythes couldn’t hope to outmatch warriors with longswords, especially Badulf’s men. They’d amassed the highest cattle count of all his father’s bands.

Like a timid maiden dipping her toe into a pool, a tip of the moon disappeared. Badulf sensed the growing restlessness of his men: a stifled cough, the stamp of a booted foot, the creak of leather. Nothing loud enough to betray their position, though even the best eventually wearied of waiting.

More of the moon slid from view. Badulf shed the gloves and cupped his hands to his mouth. An owl’s cry drifted through the hills, answered by a gentle rustling like wind in dead leaves. He signaled again, and the men inched toward the village’s cow byre.

The lone sentry, little more than a boy, slumped beside the byre’s door, staff across his knees. As Badulf and his band crept closer, the lad’s snores buzzed in Badulf’s ears.

They’d almost reached the byre when a dog started barking. The Bræde came awake, screaming. Badulf’s brain made the connection between the lad’s cry of “Angli!” and the correct pronunciation,
Eingel
. Then his sword splintered the wooden staff and bit into the unprotected neck, and the warning drowned in a bubble of blood.

Too late; the village had been alerted, and the rush began.

He didn’t bother to weigh the odds of defeating a skilled fighting force in the dark, on the snow, armed with naught but farm tools and raw courage. After wrestling into tunic, breeches, cloak, and boots, he grabbed his pitchfork.

At the hut’s door, he nearly collided with his wife.

Dressed in her thick woolen undertunic, Talya clutched their bawling infant son, Gwydion, to her chest. The gloom hid her face, but Dwras heard fear in her ragged breaths.

He stroked her hand, yanked her cloak from its peg by the door, and settled it about her shoulders, cursing the lack of time for words. Not about where to hide; he knew she’d try to cross the village, where the forest and safety lay a short dash beyond.

For what he wished to tell her, a swift kiss had to suffice.

With Talya pressing behind him and Gwydion’s cries reduced to fitful whimpers, Dwras opened the door. An appalling clamor spilled through the slit: the clash of metal on metal, the baying of dogs, the lowing and stomping of cattle, the screams of the wounded, the whoops of the raiders. Dread and fear warred in Dwras’s stomach.

The fight hadn’t reached their hut. Dwras reached for Talya’s hand. If she hurried, she still could make it to the forest…

An Angli warrior sprang at them. Pitchfork lowered, Dwras charged. The raider parried the blow, whirled, and lashed out with a booted foot as Dwras stumbled past. His knee buckled, and he fell.

Rolling onto his back, he watched the warrior close on Talya as she wailed for mercy.

Desperately, Dwras flung out a hand to catch the warrior’s foot to trip him, distract him, anything to divert his attention from Talya. The sword descended with a sickening thud. She crumpled with a gurgling cry. Spurting crimson stained the pristine snow.

The warrior turned on him. He raised his pitchfork to block the blow. The sword splintered the shaft and bit into his shoulder. Agony branded his brain. He shut his eyes. Tears chilled his cheeks.

The raider’s laughter mingled with the crunch of boots on the snow as he stalked off in search of other prey.

OTHER VILLAGERS joined the fight, women as well as men. To Badulf, it mattered naught.

The cattle stomped and bellowed inside the byre. Stampede posed the biggest danger at this point in a raid. Badulf had witnessed the destruction wrought by spooked cows and had no stomach for it tonight, though not in pity for the Brædeas. Runaway cattle could be hard to capture, and often injured or killed themselves and others in the process. Too many Eingel womenfolk and children starved at home to allow such a disaster to occur.

At Badulf’s command, a pair of men slipped into the byre to calm the beasts while Badulf led the others in search of Brædan survivors and provisions and anything else of value in this squalid village.

After the Eingel warriors had secured their bovine treasure and eaten their fill of dried beef and barley cakes, washing it down with tangy ale, their appetites turned to delicacies of a different sort. Badulf inspected the trembling, doe-eyed girls who’d been herded into one of the larger stone huts while their mothers and fathers and brothers and younger siblings lay stiffening under the stars. These girls, fated to become Eingel bed thralls, wouldn’t be joining them for perhaps a very long time.

Baring his teeth in a grin, he selected the prettiest. As he ripped her tunic to the waist, exposing milk-white breasts, and fastened his mouth to the tender flesh, she cried out but didn’t struggle. Nor did any of the others as his men cheerfully followed their leader’s example.

This part never made it into the songs, either. Perhaps, Badulf mused as he unlaced his trews, bore the whimpering girl to the dirt, hitched up her skirts, and forced her legs apart, it was just as well. Some rewards ought to remain a secret. Fewer to share them with.

SHRILL CRIES and coarse laughter woke Dwras. The noises seemed confined to one place, mayhap another hut. Heaven only knew what his clanswomen were suffering at their captors’ hands.

He resolved to find out.

Instinct goaded him to wariness. The cloud-shrouded night told him nothing of how long he’d lain unconscious. More raiders could be about. As he strained ears and eyes for signs of movement, he found none. Even the animals had fallen silent.

He pushed himself up, gritting his teeth and swallowing a scream. Black grief engulfed him. He couldn’t help the survivors, for his right shoulder was a burning, bloody mess. But he was alive.

The Storm by Dayna Lorentz
El invierno de Frankie Machine by Don Winslow
Into the Fire by Suzanne Brockmann
The Cottage on Pumpkin and Vine by Kate Angell
Wherever It Leads by Adriana Locke
JAX (Breaking the Declan Brothers #1) by Kelly Gendron
Blood Guilt by Ben Cheetham
Something About Lorelei by Sandi Lynn
The Endless Knot by Gail Bowen
Dragon's Complete Desire: The Killington Dragons (Paranormal Romance) by Meg Ripley