The Color of Vengeance (3 page)

He chewed a gloved knuckle. Each silent moment brought his chance for revenge that much closer, but too great a delay might cost him his life and the entire village with him.

Inspiration hit. If he feigned sleep, the raiders might show themselves sooner. Not a sure wager, but a better plan than playing this damned guessing game.

Dwras map Gwyn felt astonishingly calm as he inched down the byre wall and let his head slump. With one eye closed, he kept the other half open upon the valley. The spear slowly came to rest across his lap. His other hand, hidden in the wolfskin’s shaggy folds, clutched the horn. He gripped the spear and waited.

Without doubt, he’d never done anything as hard as pretending to be asleep while judging when the raiders had crept far enough from the forest. He feared his hammering heart would wake everyone by itself.

AS BADULF and his men left cover to approach the village and its lone, dozing sentry, the man jumped up, bleating the alarm. The huts spewed shouting men and women brandishing scythes, axes, pitchforks, and staves. Surprisingly, many of the men wielded swords. The sentry raced toward them, howling to wake the dead, spear leveled.

But not Loth’s. These men fought with skill and discipline the likes of which Badulf had never seen. As the sentry neared, the moonlight bouncing off his cloak-pin revealed not the rearing Bear of Lothian, but a raging dragon. The omens, Badulf realized with bowel-loosening despair, had been true!

KILLING CAME to Dwras with incredible ease. The first foe tasted the spear point through the throat.
That, for Talya!
The second died with the spear sprouting from his belly.
For Gwydion!
As he yanked it free, he caught another warrior in the chin with the spear’s sharpened butt. He whirled to see the man staggering backward, arms flailing. Dwras gladly helped him enter the realm of the Angli gods.

He lost count after that, remaining oblivious to how the others were faring. Everything melded into a blur of snow churned with mud and blood in dawn’s ashen netherlight. Sometime during the skirmish, his spear shaft broke. He didn’t recall picking up a dead man’s sword, yet there it lay in his fist, and just as useful as his spear had been.

Passion for vengeance flourished within him. Each man he felled spawned the lust to kill two more. To his fierce joy, there seemed to be an endless supply.

IN ANGUISH, Badulf watched another man fall beneath the sentry’s spear before his sword became too busy trying to save his own skin. Hoarsely, he bellowed retreat, fervently praying that his surviving men could hear him.

He broke away from the skirmish line. As he lumbered across the meadow, with the enemies’ pursuit thundering in his ears, he drank hope from the sight that some of the others had escaped.

THE REMAINING Angli warriors bolted for the woods.

No! They have no right! I want them all dead around me!

As Dwras began to follow, something snagged his heel. He glanced down and laughed. A fallen raider was feebly attempting to hinder his pursuit. Smirking, he raised his sword for the finishing blow.

The man blurted a single word that sounded a lot like…

He pressed the sword to the wounded warrior’s throat. The captive looked up at him through pain-hazed yet hopeful eyes.

Talya had begged for mercy. Had this man’s companions shown mercy to her or Gwydion or the others? Would they have shown mercy to him, had they found him alive that night? Or tonight? Fresh hatred gusted through him. Did this Angli dog deserve what had been denied to Dwras’s loved ones?

Could this be the man who had murdered Talya and Gwydion?

He stared at his enemy’s grimy, blood-smeared face, racking his brains for the tiniest trace of recollection.

But it had been so dark, and the warrior had struck so quickly…Dwras abandoned the effort. Proof or no, it mattered naught. If this man hadn’t killed them, another Angli warrior had. By heaven, he, Dwras map Gwyn, would make them pay! Every last stinking fatherless son!

He tightened his grip. The captive’s eyes squeezed shut.

I like your spirit.
The memory of that voice surged forth as real as if the Pendragon were standing beside him, ankle-deep in the icy mud and gore.
I would like to put it to better use.

Surely there could be no better purpose than to help Arthur rid Brydein of these Angli vermin.

Yet he couldn’t forget the fathomless compassion welling in those eyes. When Chieftain Loth had been prepared to pass sentence, Arthur the Pendragon had bestowed mercy.

The man at his feet lay wounded, unarmed, and helpless. Killing him would make Dwras no better than his family’s murderers.

So be it. He cocked his sword.

Talya never would have approved.

“No!” Stiffness seized Dwras’s newly healed shoulder as he flung the weapon away. Arcing across the sky, the sword flashed golden in the sun’s first rays before plunging into a clump of heather.

Conflicting emotions collided within him. Feeling faint, he cast about for something on which to brace himself, but no tree or boulder or building stood close enough. He bent double, hands to trembling knees, panting. His gaze fell upon the warrior he’d spared, who was regarding him with tearful gratitude. Dwras’s vision misted.

His mind’s eye beheld his beloved wife standing before him, not—thank God—as on that fatal night, but smiling broadly, arms outstretched in loving welcome. How he ached for her touch! For the assurance that she’d forgiven him for failing to protect her and Gwydion—and for the ability to forgive himself. Face in hands, he dropped to his knees, heedless of the slushy chill soaking his leggings, his shoulders shaking from the force of his sobs.

Invisible warmth enveloped him in tingling waves. After his salty well had run dry and the warmth dissipated, he inventoried his emotions, amazed to find that his rage and hatred and frustration had yielded to new sensations of lightness, of cleansing, of deliverance. And forgiveness.

“Well done, Dwras map Gwyn!” A hand clapped his shoulder. Wiping his eyes, Dwras scrambled to his feet to gape at the grinning unit commander. “Or should I say, Dwras Gwyn Peldyr?”

Dwras Gwyn Peldyr?
Surveying the pale heavens, he pondered the name…and liked it.

Farmer Dwras, son of Gwyn, had died with his village. This day had witnessed the birth of a warrior, Dwras White Spear.

He saluted his commander and gave the wounded Angli captive a hand up. The blood-price for Talya and Gwydion had been paid in full. Dwras Gwyn Peldyr vowed to spend the rest of his life in the Pendragon’s service, honoring their memories with deeds of valor. 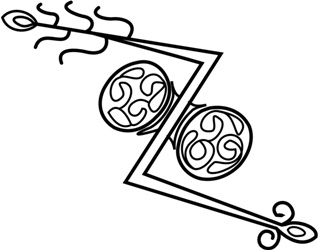 K
IM HEADLEE LIVES on a farm in the mountains of southwestern Virginia with her family, cats, fish, goats, Great Pyrenees goat guards, and assorted wildlife. People and creatures come and go, but the cave and the 250-year-old house ruins—the latter having been occupied as recently as the mid-twentieth century—seem to be sticking around for a while yet.

Other published works by Kim Headlee: