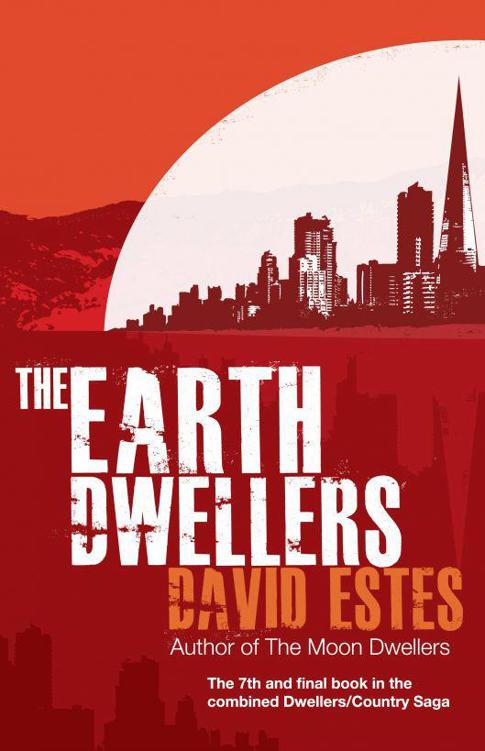 Book Four of the Dwellers Saga

(AND Book Four of the Country Saga)

Published by David Estes at Smashwords

Discover other exciting titles by David Estes available through the author’s official website:

or through select online retailers.

The Adventures of Nikki Powergloves:

Nikki Powergloves and the Power Council

Nikki Powergloves and the Power Trappers

Nikki Powergloves and the Great Adventure

This book is dedicated to each and every blogger

who has taken a chance on one of my books

and shared what they thought of it with the world.

The Earth Dwellers
will cap off an eighteen month journey that has taken me from unknown Indie author to still-mostly-unknown
fulltime
Indie author. The change is a subtle one for most people, but for me it’s a dream come true. To the hundreds (and now maybe even thousands!) of readers who have come along for the ride with me, either by reading
the Dwellers Saga
,
the Country Saga
, or both, I thank you from the bottom of my heart.

Anyway, that’s my advice; it’s up to you what to do with it. In any case, thanks for being a part of my own adventure, I’m a better person for having written stories for you!

Recommended Reading prior to The Earth Dwellers

A Guide to Slang and Terminology from the Country Saga

Scorch- hell, or the underworld

Call- husband or wife previously assigned during a Heater ceremony. “The Call” practice has since been abolished with the creation of the Tri-Tribes.

Totter- a young child, a toddler

Midder- older kids, but not yet teenagers

Yag- Large mountain-dwelling creature of ice country legend, not unlike a yeti, bigfoot, or the abominable snowman

Slider- a smooth-sanded plank of wood strapped to one’s feet to quickly slide down the mountain. Like a snowboard.

The Cold- what Icers call “the Fire.” Referred to as the Scurve or the Plague in water and storm country, respectively.

Chill- hell, or the underworld

Star dwellers- the lowest-ranking people of the Tri-Realms, living the deepest underground and in abject poverty

Moon dwellers- the “middle class” people of the Tri-Realms, although in reality their condition can only be described as impoverished

Wilde Ones- a Heater splinter group led by a young woman named Wilde. Comprised of only strong-willed girls, the members of the tribe have been trained to fight.

Marked- another Heater splinter group that broke off in order to avoid the Laws of the Heaters. They are easily identifiable due to their markings, or tattoos, which represent how many lives they’ve ended, and how many they’ve saved.

Tri-Tribes- an alliance between the Heaters, the Wildes, and the Marked

Glassies (also referred to as Pasties or earth dwellers)- originally living underground, the Glassies are completely comprised of members of the Tri-Realms who made the trip to the earth’s surface, surviving only by building a large glass dome to protect their city from the toxic air.

Stormers- a tribe that lives on the stormy seaside plains, surviving off the land and riding horses that they refer to as the Escariot

Soakers- a pirate-like people that control a large fleet of ships and prefer living on the water, landing only to replenish their fresh water supply

And now the end begins…

I
blink against the blinding sun and the crimson sky and the birds wheeling overhead, and they’re still there. My mind is spinning, whirling, remembering: the long journey with Tristan through the rock-surrounded shaft, the exhilarating walk down the tunnel to end all tunnels, the thrill of stepping out onto the surface of the earth, of kissing Tristan, of breathing the real, real air.

And then the three girls appearing, as if from nowhere. But no, they stepped from the shadow of the very rock looming behind us. The middle one asked a question—something about who we are and a sun goddess, right?—one that’s still hanging in the air, patiently awaiting an answer.

I open my mouth to speak, but nothing comes out; not a breath, not a word, not a sound.

Thankfully, Tristan answers for the both of us. “I’m Tristan Nailin, a sun dweller, and this is Adele Rose, a moon dweller. We’ve come from the depths of the earth.”

The girls just stare at us for a moment, the two on the sides not smiling, but not frowning either—just staring, like we’re covered in filth. The one in the middle, however, is wearing a thick scowl, her eyebrows bent and threatening to pinch her nose. I want to look away, to avert my eyes under their scrutiny, but I don’t. I stare right back.

They’re wearing very little clothing, just small swatches of material that appear to be some kind of animal skin, around their chests and torsos. They’re beautiful and dark and, strangely, remind me of Cole—who I haven’t thought of in a long time—not because of their skin, which is several shades lighter than his shadowy complexion, but because of the undercurrent of energy that seems to surround them, both dangerous and exciting and the kind you want on your side. Especially the middle one, the frowner, who is musclier than I am, her toned, tanned arms hanging loosely at her sides.

In a split second she’s managed to whip out a long blade, glinting in the sun.

“Now, Skye,” the tall one beside her says, her voice smooth and almost soothing. She reaches out a hand and touches her fingers gently to the middle girl’s arm. Skye, I assume.

“We don’t know that,” Wilde says, firmness in her tone.

Shaking off Wilde’s hand, Skye steps forward, spinning her blade casually. “Yer from the Glass City,” she says. Not a question.

“Yes,” she says. “Only the Glassies are vomited from the earth.”
Welcome to Earth
, I think wryly.

Taking Down the Lion: The Rise and Fall of Tyco's Dennis Kozlowski by Catherine S. Neal
Brass Monkey: A James Acton Thriller Book #2 by J. Robert Kennedy
Dante's Ultimate Gamble by Day Leclaire
Final Vector by Allan Leverone
A Wolf's Duty by Jennifer T. Alli
Until You (Fall Away Series) by Douglas, Penelope
Little Man, What Now? by Fallada, Hans
A Bug's Life by Gini Koch
Eye of the Tiger by Crissy Smith
Back Story by Robert B. Parker