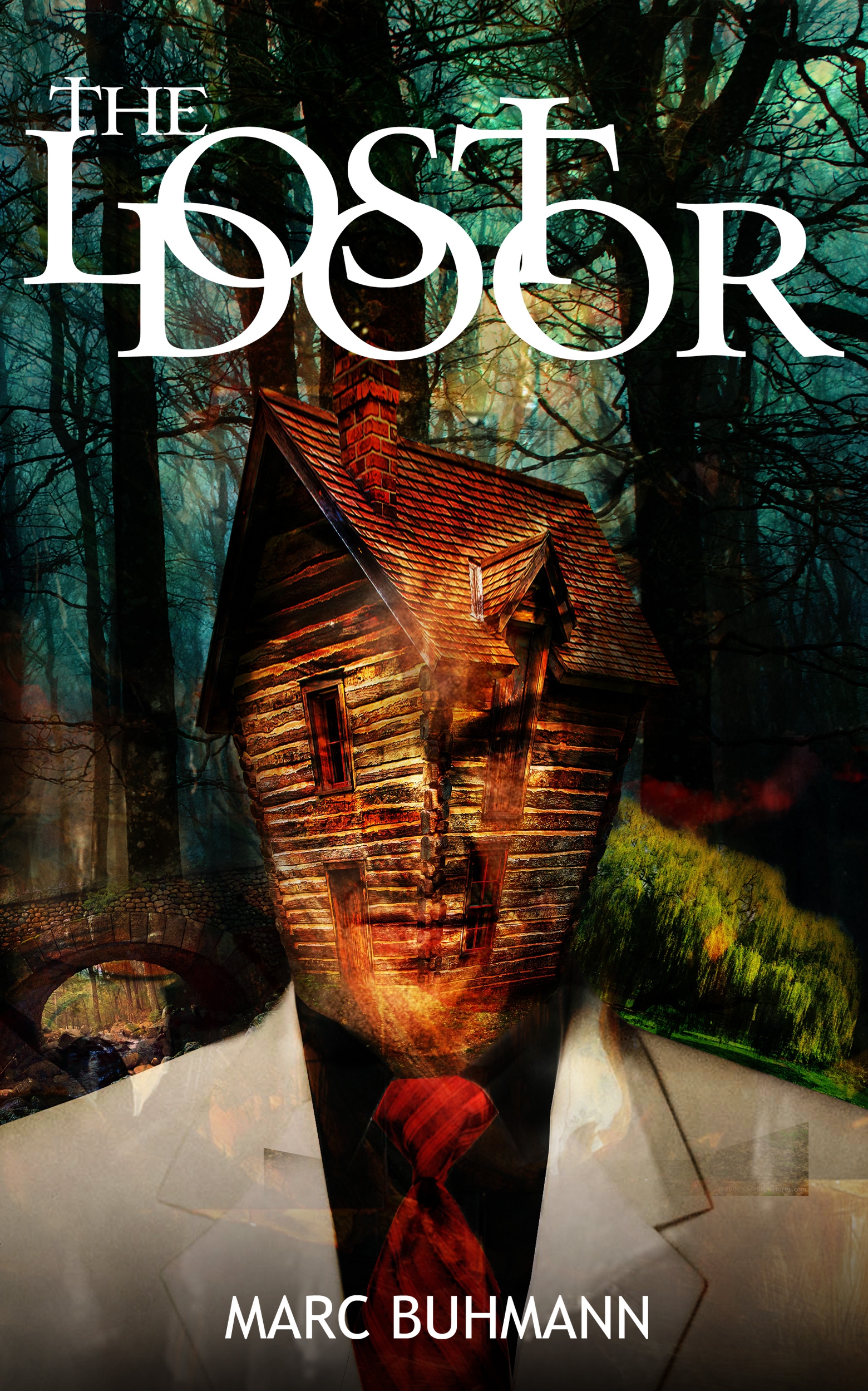 I really hope you enjoyed The Lost Door. Please...

This book is a work of fiction. Names, characters, places and incidents are fictitious. Any resemblance to actual events, locales, or persons, living or dead, is entirely coincidental.

No part of this book can be reproduced or transmitted in any form or by any means, electronic or mechanical, without permission in writing from the author.

To my beautiful wife, Francine. Thank you for all your love and support.

Thanks to the following people for their feedback and support: David Moore, Lisa Krause, Bruce Buhmann, Veronica Smith, and especially my wife Francine. I very much appreciate the time and energy you all have invested in reading early drafts of this novel.

Thank you for downloading my debut novel,
The Lost Door
. I hope you enjoy it as much as I had writing it. I’m providing this edition, what I call the Torrent Edition, to you via BitTorrent in an attempt at self promotion. All I ask is you do one of two things: leave a review of the book on Amazon, Smashwords, Barnes & Noble, etc., or purchase a copy at one of those stores. I’ll even give you a coupon code. I’m an indie author that would love to be able to make a living at writing, and my hope is that some of you will support my creative endeavors.

So what about that promo code? The ebook retails for $3.99, but if you buy a copy from for $1.99 at Smashwords.com using the coupon code
RQ64Q
. That’s cheaper than what I discount it at during promotions, which is $2.99, if you’re curious.

I appreciate you taking the time in giving
The Lost Door
a chance.

Gray swirled around her. Dying! She had to get out of here, but how? There was no escape, nowhere to go. Was this it? Was this how it was going to end?

The gray grew dark and gloomy. Suffocating. She was scared. It wasn’t time! Not yet. Not yet. Not…

And then all was still, and she felt herself starting to ascend. But to where? Would she return home, or would she end up in some vast ether of nothingness? She was in uncharted territory, incomplete. So many questions, so many unknowns. If she had a body she’d be trembling.

In hindsight it had been a mistake to falsify Claire’s memory. She’d been only trying to help though, to try and protect her. Having suffered loss herself she didn’t want Claire to deal with the pain.

And look where it got you,
she told herself again for the—how many times? Too many.
Trapped. Unable to leave.

That was neither here nor there now. It was done and she would suffer the consequences. She just hoped her judgment all those years ago wouldn’t seal the fate of billions.
If you don’t return with me life as we know it will cease to exist,
he’d said. She wondered, more now than ever, if that were true? Could her selfishness really have impacted so many?

Not by choice,
she told herself.
Your hands were tied.

Liar,
another voice said.
You were scared.

She recognized that it, too, was her voice, though more mature and knowledgeable with age.

There was nothing she could do but wait to see what would happen.

As she rose she felt Claire slip away. Poor Claire. It was never supposed to be like this.
I’m so sorry, Claire.

She was ready for the inevitable, scared yet anxious, wondering what would happen.

In a faraway place she heard a tiny voice. She sought it out, searching the blackness. Everything echoed here. Where was it coming from?

She focused and felt a glimmer, like a twinkle from a distant star.

There! Could this be the answer? Would this buy her time?

She swam to it hoping—no,
praying
—that this would work. She needed just a little more time to find him. She needed him to come back, to make her whole.

She was almost to the glimmer, the voice growing in distress. It sounded like…

A thought occurred to her. Would she be damning her the same way she’d damned Claire? Did she want to take that chance?

She floated toward the light—toward the voice—and hoped.

The first thing she heard was the slow rhythmic sounds of a heart rate monitor.
Must have dozed off during one of my shows again,
Claire thought.
Grey’s Anatomy? Maybe one of the old ones: ER or Chicago Hope?
She struggled to open her eyes, the tired lids fighting, wanting to stay closed. A brightness pierced the thin opening and she pinched her eyes closed. What the hell? Why so bright? Again she tried, slower, compensating for the light, waiting for the brain splitting brightness to ease.

Her surroundings came into focus and Claire saw she wasn’t in her living room.
Murray
was on the television hanging from the wall, the guests thankfully muted. Disinfectant seeped into her nostrils. Claire looked down and saw she was in a bed covered by white sheets. An IV drip fed a clear fluid into her arm. Next to her, sleeping in a chair, was her daughter Emily.

She was in the hospital and having a sense of deja vu. Claire pushed herself up with a grunt. How long had she been here? Her body ached, every muscle throbbing in anger. The last thing she remembered was drinking, something that had become a ritual pretty much every night as of late. It was the only way to help her sleep, to dull the abandonment. Why the memory of her husband running off had resurfaced was a mystery, but it had with a vengeance.

“Mom?” Emily stared at her with radiant blue eyes.

“What are you doing here?” Claire rasped. Her throat was raw and on fire.

“If I did I wouldn’t be asking.” Claire massaged her throat. “Can I have some water?”

“Sure.” Emily stood and took an empty Styrofoam cup with a straw to the sink and filled it, keeping an ever watchful eye on her mother.

“Staring. I don’t need to be scrutinized.”

Emily returned to her mother, handing her the cup. Claire pinched the straw between her lips and sipped at the water, every swallow burning. Claire could tell Emily was holding back, that she wanted to lash out at her.

“How do you feel?” asked Emily.

“Hell. What do you think?” She tried to clear the rawness in her throat. “What happened?”

Tears sprang to the corner of Emily’s eyes. “I found you… dead.”

Emily lost it. “Don’t be so dramatic? You
died!
Do you know how scared I was? If I hadn’t found you when I did—” She looked incredulous and hurt. “I was so scared. What would I do if you died?”

Unsure how to respond Claire lifted her arms and Emily fell into them. “I’m alright, sweetie. I’m alright.”

“Why, mom? Why?” Emily sobbed into her mother. But Claire didn’t respond. Instead, she hugged her daughter, comforting her as she had when she was a child, stroking her hair. After a time Emily’s crying subsided and she pulled away, wiping away the tears with the back of her hand. “I’m sorry.”

“Let me go talk to the nurse.”

Emily returned a few minutes later with a nurse in tow. She looked at the readings on the monitors and asked, “How are you feeling?”

“The doctor will be in in a little bit to evaluate you.”

“That’s not an answer,” Claire said with a hint of annoyance.

The nurse ignored it. “You can discuss that with him. Can I get you anything?”

The nurse gave a false pleasant smile and walked away.

“Did you think they’d just let you leave because you asked?”

“Same thing.” Claire sipped her water and it went down a little easier.

“Well, now that you’re up I’m going to go home. The place needs to be cleaned up. But I’ll be back in a little bit, okay?”

“Yes. It is. I’ll be back soon,” Emily said and leaned in. There was something in her eyes, something Claire didn’t recognize. It was defiant and daring, and it took her aback. It was a look she’d never seen in Emily, as if a stranger was hiding behind those eyes and it scared her.

“I love you,” she whispered and wrapped her arms around her. The hug was warm, familiar, and strange.

David Rottingham drove his rented Ford Taurus along the two-lane Highway 49. The window was half down, and he inhaled the fresh pine morning air. He hadn’t entered town yet, he could already sense the change. On the surface everything seemed as picturesque as always but beneath was a rot. He wondered if the locals could sense it too.

The last time he’d been in River Bend was twenty years ago at the tender age of sixty-two. His wife Lilly had died a year earlier, and between the time of her passing and his leaving River Bend he’d been lost. His life had revolved around her from the day they had met, only rarely separated more than a day. In many ways his life had ended when hers had, and with no children to help with the grief, for the first year he’d just gone through the motions.

During her final days she’d spoken nonsense, prattling on about shadows, someone named DeMarcus, and something called
turmoore
. He had no idea what that was, went so far as to look it up, but it was a mystery. He just assumed it was the ramblings of a sick woman on the verge of death.

For months he suffered from insomnia after she died. Then one night he’d had a dream. It had been a fall morning, much like this one, when David awoke feeling unburdened. The dream was still fresh in his mind and it was all about Lilly and her life. In it Lilly had encouraged him to move on, to live and learn what he could before his time was up. This is a gift, she had said. Enjoy it; treasure it. For the first time in more than a year he awoke with a purpose. Over the course of the next three months he packed up his belongings, sold his home, and went out in search of whatever it was he was supposed to find.

Now he was back home. The forest gave way to the town, which appeared to have changed little. The bus depot on 6
th
and Circle and Ed’s Service across the street were still open, both desperately waiting for new coats of paint. He didn’t see anyone, but he heard the torque wrench echoing out from the open garage door. Down the block was the Green Forest Inn. While he’d never stayed there he knew the woman who ran it, a lovely woman named Shelly Lynch, and had no doubt that the rooms would be quiet and comfortable.

The View From Penthouse B by Elinor Lipman
Sharpe 18 - Sharpe's Siege by Bernard Cornwell
T.J. and the Penalty by Theo Walcott
The 900 Days by Harrison Salisbury
Distant Memory by Alton L. Gansky
Hot Water by Sparks, Callie
The Refugees by Arthur Conan Doyle
A Dream to Cling To by Sally Goldenbaum
Judith E French by Morgan's Woman
A Pair of Silk Stockings by Kate Chopin