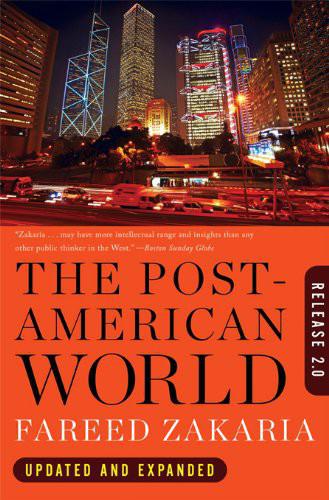 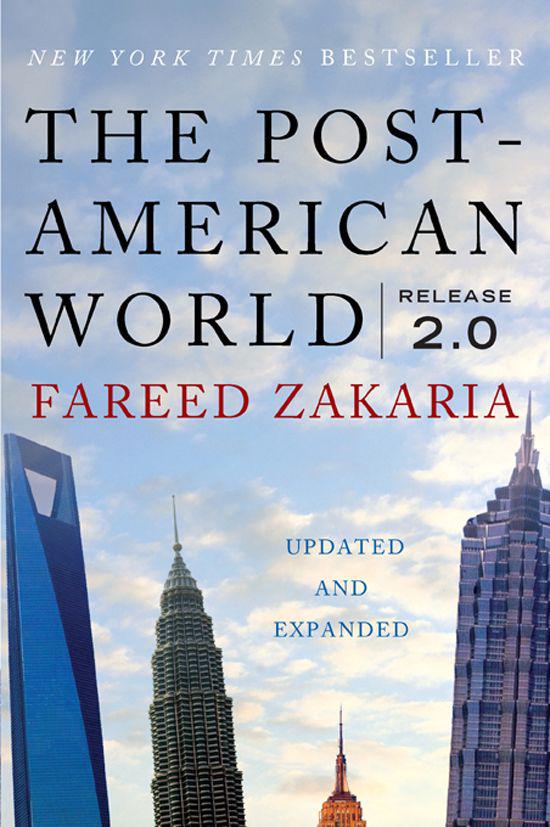 “Rarely does a young author and journalist come along in possession of a prophetic brilliance, near-perfect clarity, and a stirring eloquence that combine to inform his readers concerning what lies ahead on the international landscape. Such a person is Fareed Zakaria. . . . In writing this book, Zakaria has performed a great service to America and the rest of the world. The Post-American World is a mirror that helps us examine the role of the United States and numerous other countries with honesty and candor. Readers will be greatly enlightened and richly rewarded by Zakaria’s exquisite understanding of international relationships, global politics, and economic development.”

“A provocative and often shrewd take that opens a big picture window on the closing of the first American century and the advent of a new world. . . . Mr. Zakaria uses his wide-ranging fluency in economics, foreign policy and cultural politics to give the lay reader a lucid picture of a globalized world (and America’s role in it) that is changing at light speed, even as he provides a host of historical analogies to examine the possible fallout of these changes.”

“Fareed Zakaria has been consistently brilliant in his analysis of world affairs but also something far more rare: he has turned out to have been right. Now he’s produced another masterpiece of insight. With great reporting and cultural understanding, Zakaria explains a future shaped by many emerging power centers. This book isn’t about America’s decline, it’s about how it can deploy its unique strengths to prosper as the rest of the world does so as well. It’s a definitive handbook for political and business leaders who want to succeed in a global era.”

—Walter Isaacson, author of
Einstein: His Life and Universe

“This is a relentlessly intelligent book that eschews simple-minded projections from crisis to collapse. . . . Maybe it takes a Bombay-born immigrant like Zakaria, who went from Yale to Harvard . . . and to the top of Newsweek International, to remind this faltering giant of its unique and enduring strengths.”

“It is refreshing to read Fareed Zakaria, who writes with infectious (though not naïve) sunniness. . . . Mr. Zakaria makes his case with eloquence but without Panglossian simplicity.”

“Zakaria . . . may have more intellectual range and insights than any other public thinker in the West.”

“Zakaria’s The Post-American World is about the ‘rise of the rest,’ a catchy phrase from one of the most widely cited writers on foreign affairs. His prism is correct: We should focus more on the ‘rest,’ even if America is still the premier superpower. . . . As the Iraq war drags on and China rises, the larger story of the post–Cold War era has come into sharp relief: We are not the center of the universe. It matters less that particular countries are pro- or anti-American than that the world is increasingly non-American. We need to get over ourselves.”

“Zakaria . . . is judicious, reasonable, smooth, [and] intelligent. . . . He points out that, aside from some pockets of backwardness, the whole world has been getting much richer. . . . Even though the economic scene looks gloomier now than it did when he finished his book, Zakaria is correct to insist that many people everywhere have benefitted from the global boom.”

“Provocative . . . illuminating and right. . . . [In] his welcome contribution to the debate, Fareed Zakaria . . . deftly avoids the extremes of declinism and triumphalism.”

“A far-reaching analysis. . . . Zakaria’s strength lies . . . in offering a lens through which to understand America’s role in a globalized world.” —Reza Aslan,
Slate

“When a book proclaims that it is not about the decline of America but ‘the rise of everyone else,’ readers might expect another diatribe about our dismal post-9/11 world. They are in for a pleasant surprise as Newsweek editor and popular pundit Zakaria . . . delivers a stimulating, largely optimistic forecast of where the 21st century is heading. . . . A lucid, thought-provoking appraisal of world affairs, this book will engage readers on both sides of the political spectrum.”

“With characteristic elegance and insight, Zakaria offers a striking picture of the rapid growth of the non-West.”

“Sharply observed . . . Fareed Zakaria’s sobering book analyzes the changes afoot as rising global players challenge U.S. dominance. . . . There is no doubt that he is on to important stuff.”

“A thoughtful, reasoned and hopeful sketch of global power and politics in the 21st century.”

“Fareed Zakaria is one of the most thoughtful foreign policy analysts of our day and his new book, The Post-American World, is a must-read for anyone interested in globalization—or the Presidential election for that matter.”

“His latest book, The Post-American World, is a highly informed and meticulously detailed examination. . . . Studded with statistics, Zakaria’s book is notable for its emphasis on economics as the driving force of global change.”

“Even if we Americans already know that our country has lost some of its game over the past, say, eight years, Newsweek International editor Fareed Zakaria delivers this message in an altogether new, almost buoyant context.”

“Thought-provoking and important. . . . Fareed Zakaria, whose wise and perceptive editorials in the American magazine Newsweek should be required reading for policymakers around the planet, has written a minor masterpiece full of pragmatic, informed intelligence. . . . Zakaria is optimistic, though far from complacent. . . . Read Zakaria to know what has, should and will happen.”

“This new analysis of America’s role in the world is a serious, readable . . . essential book.”

The Future of Freedom:
Illiberal Democracy at Home and Abroad

From Wealth to Power:
The Unusual Origins of America’s World Role

(coeditor)
The American Encounter:
The United States and the Making of the Modern World

For information about permission to reproduce selections from this book,

For information about special discounts for bulk purchases, please contact

Who's Sorry Now? by Jill Churchill
The Wrath Of the Forgotten by Michael Ignacio
Bullyville by Francine Prose
Street Soldiers by L. Divine
Sabotage At Willow Woods by Carolyn Keene
The Escort by Raines, Harmony
Witchful Thinking by H.P. Mallory
Imminence by Jennifer Loiske
At the Edge of the Game by Power, Gareth
Alice in Deadland by Dhar, Mainak