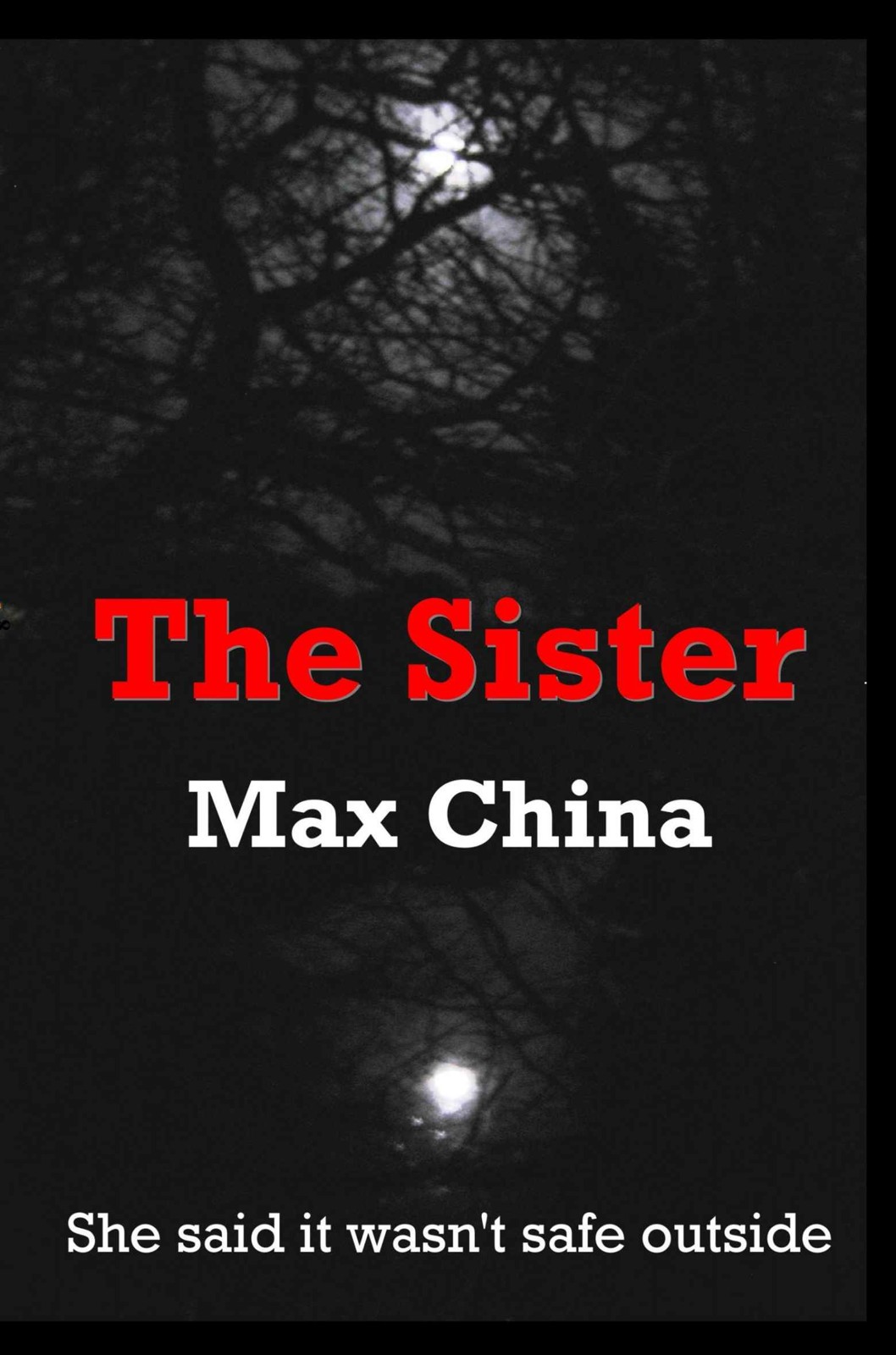 The right of Max China to be identified as the author of this work has been asserted by him in accordance with the Copyright, Designs, and Patents Act 1988

All rights reserved. No part of this publication may be reproduced, stored in or introduced into a retrieval system, or transmitted in any form, or by any means (electronic, mechanical, photocopying, recording or otherwise) without the prior written permission of the author.

This work is entirely a product of the author's imagination, and is therefore a work of fiction.

A CIP catalogue record for this title is available from the British Library.

'The Road Not Taken' is a poem by Robert Frost, the first of his poems to appear in the collection: Mountain Interval, published in 1916.

Partially quoted and referred to by a character in this novel, and can be  read it in its entirety, on the last page of this book.

To those who are always searching, for love, for meaning, for themselves . . .

He'd always stayed away from deep water - it scared him, but this time was different, he jumped in to save someone; his efforts have exhausted him. He can't swim.

Did you save her?

Stripped of every thought that used to matter, he struggles. Snatching a desperate breath before going under again, he presses his lips tight, clamping his last breath inside. He sinks lower. Pressure builds, charging his head with ear-splitting pain: the sound of his heart grows louder. Deeper down, the murky water blankets the light filtering through. He closes his eyes.

Oxygen drains from his blood and lungs; every signal from every nerve attacks his ability to remain calm. His chest bucks against the urge to gulp. With only seconds to spare, his feet touch the bottom.

The brute will to live kicks in, and survival mode takes over, diverting every ounce of strength into powerful thighs. Driving up, he surges through the water, a human missile shooting for the surface. The initial burst of acceleration stalls against the mass of water. Without technique, desperation propels him further, and he thrusts his nose and mouth clear of the lake, out into the air. He sucks in a quick shot, before sinking again.

A Japanese mantra starts in his head.
Mushin no shin
. . .
empty mind. All thought
must
disappear.

The instant he feels the lakebed underfoot; he drives up hard again, a bubble about to burst.

Although his mind is empty, he knows that if he doesn't make it this time, without rescue, he is finished. Flailing his arms and legs, his frantic actions get him higher, and he pushes his mouth up to clear the water.
Just another inch . . .

The effort in vain, the chance missed, he slips down again.

His heart sinks. He'd always known that when the end came, it would come by water
. . .
the end of living on borrowed time.

Someone's words spring to mind:
In those last moments, you don't see your whole life flashing by, but if you're lucky . . . you get to make some sense of it all.

Reflex takes over. He gags on the first influx of water. Watching the huge bubble of displaced air break for the surface, he sees a distorted world within it.
You should have learned to swim . . .

Halfway across a sloping section of the woods, in a well-hidden clearing, a boiler-suited man was about to light a fire. Next to it, a small stew pot filled with rabbit meat. Discarded body parts, skin and offal, lay a few feet away. A cloud of bluebottles buzzed around the unwanted waste; the noise irritated him. Scooping the refuse up with a shovel, he swung it over his shoulder, catapulting the pieces with ease across the space between him and the water. They plopped in through the chickweed, releasing an unpleasant, sulphurous odour. With the remains gone, the flies dissipated, and silence returned.

As the match he struck fizzed into life, he heard voices. He blew it out. Moving low and keeping under the cover of scrub, he peered out through the bushes.

A young man came into view crossing over a ridge in the path further down. He was dressed in khaki and wearing a leather bush hat. A rangy dark-haired girl walked next to him. Both carried rucksacks, sleeping bags and climbing gear.

They were heading his way.

As they came into earshot, he kept back out of sight.

"You told Lei you were coming here?" The girl asked. "Are you sure she won't get lonely and come down to join you - us?"

"No. She won't come here. Like I said, we argued, and now we're not talking, besides, she's scared of this place, what with all those old stories . . ."

"What old stories?" The girl stopped and looked at him, hands on hips. "You're scaring
me
now." Suspicion darkened her expression. "By the way, you didn't tell me why you'd argued. You haven't told her about us, have you?"

"No - now come on Christina, let's get this tent up!" He laughed and pulled her in for a kiss.

Thirty minutes later, the man unfolded the two sets of new boiler suits he'd fetched from his car and laid them out by the streambed. He took the left hand sleeve and the left trouser leg of one set and twisted the ends, joining and knotting them together. Then he repeated the action on the opposite side. He’d now formed two handles, with the main body of the suit becoming the bag in the middle. When he was finished, he did the same with the other one and then, unzipping the top of each, prepared them to receive their cargo of ballast.

The trek to the car in the heat and his latest exertions left him sweating profusely. A mass of flies trailed him while he collected fist-sized rocks from the dried out edges of the nearby stream.

He counted out twenty-seven stones for each boiler suit. The number was important to him, the product of three, multiplied by itself three times - the ultimate lucky number. With the stones packed in, he hauled them up to the pond, placing the modified suits on the ground near the water.

His straw-coloured hair, mixed with dirt and perspiration from his forehead, and stuck to his face. He drew his fingers across it, and down his cheeks, wiping the sweat away, giving him the appearance of wearing light camouflage.

Moments later, he crept up on the tent, moving closer, listening to the growing sounds of passion. His shadow cast itself across the nylon wall. The moans coming from inside ceased abruptly.

Damn!
He'd seen it too late. Moving in the opposite direction, careful to keep the sun in front of him, he stood perfectly still, head tilted, an ear cocked close to the orange fabric. Against the sunlight shining through from the other side, he could see their silhouettes quite clearly, frozen in position, the girl had her knees drawn up, the man between, on top.

"I saw someone!" she whispered urgently.

"Thomas - there's someone outside."

The stalker held his breath, expecting the top shadow to extricate himself, and come out to look. They remained locked together.

"There's no one out there, relax." Slowly, tentatively at first, the dark profile of his buttocks resumed thrusting.

Outside the lover's nest, the man moved silently towards the entrance.

High above, a bird of prey cried, its keening pierced the air.

The Milowski family walked much further than they had intended to find the ideal picnic spot, choosing a wide open meadow where Bruce could play with little chance of hurting himself. From where they sat on a spread of blankets, the field of vision was uninterrupted for hundreds of yards.

His grandfather stared up between the rocky crags at the top and pointed. "Can you see that bird, Bruce?"

"You've got good eyes," Mrs Milowski said. "I wouldn't have noticed it."

"Do you have binoculars?"

"No, telescope," he said. Although he'd lived in England for twenty years, a trace of Eastern European accent remained in his voice.

He focused on the bird.
A buzzard.
"There, at top of cliffs. Probably, he lives there."

He handed the 'scope over to Bruce's father, who trained it first at the sky, and then at the craggy outcrop
.

"Maybe later," she said, tending to the baby.

"You, Bruce, you look…" He pulled the boy in close and passing the telescope over, showed him how to work the adjustment wheels. "Remember, if you can't see, turn those buttons I showed you."

Fascinated, he stared through the lens, sweeping the skies and the landscape. On the other side, lower down, he caught a flash of bright colour. Keeping it within sight, he fiddled with the controls until he brought the object into focus. It was a girl, a young woman dressed in purple, undoing her hair.

He lowered the telescope, and compared the image with what he could see with his naked eye. The difference amazed him.

His mother's voice drew him away from the distant world he'd discovered. "Bruce, put that down for a minute and come and eat."

When they had finished their food, Bruce amused himself by laying on his front staring at the intricacies of the grass below his face, constructing fantasy adventures which involved cutting his way through the jungle, battling giant ants and spiders. Quite suddenly, he rolled onto his back and stared up at the sky. Something had unsettled him. He didn't want to lie there anymore. "I'm bored, can I go and explore?" he asked none of the adults in particular.

His father and grandfather were deep in conversation, his mother although busy with his two-year-old baby sister, turned her attention to him.

"Yes you can, Bruce, but I want you to stay where I can keep an eye on you," she said.

Over the course of the next few minutes, he edged further away.

Looking back to gauge her reaction, and waving to reassure her, he managed to inch his way towards a fence separating the meadow from another field, a hundred yards away. On the other side, the vegetation was quite different from the one he was in now.

He paused, uncertain, looking back at his family. His mother, distracted by his sister's crying, had turned away to soothe her and the men were still engrossed in deep conversation.

He dropped to his knees and slid under the barbed wire, careful not to catch his clothes.

When Mrs Milowski realised that Bruce had vanished, she cried out, "Bruce, where are you? I told you not to wander off," she wailed, and then panic rising, she shouted at the top of her voice, "Bruce!"

Both men stood up, their faces registering immediate concern as they scanned the meadow, looking in all directions. "What are you talking about? Where was he when you last saw him?" Her husband asked.

"He was over there," she said, pointing over to the edge of the field. The little girl sensed something was wrong and began to cry. Mrs Milowski hugged her tight.

"Find him," she told them, clasping the child's head to her shoulder. She bit her lip, keeping her face hidden from the little girl, and her eyes squeezed shut. A large tear rolled down her cheek.