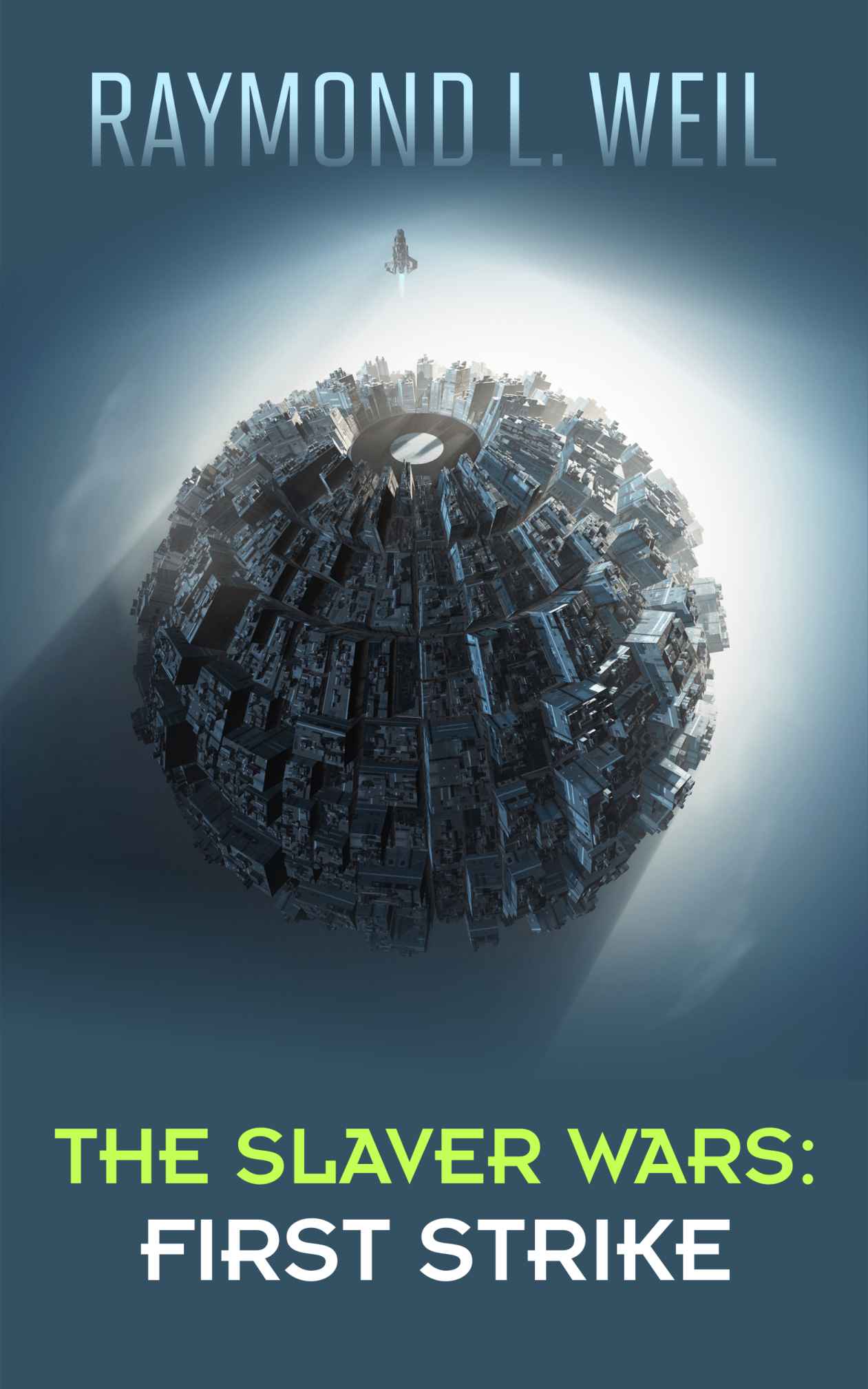 Books
in the Slaver Wars Series

Moon Wreck: First
Contact (Book One, part one of three)

This
book is a work of fiction. Names, characters, places, and incidents are either
products of the author’s imagination or used fictitiously. Any resemblance to
actual events, locales or persons, living or dead, is purely coincidental. All
rights reserved. No part of this publication can be reproduced or transmitted
in any form or by any means, without permission in writing from the author.

The
800-meter Hocklyn escort cruiser Kraken exited the swirling
white spatial vortex in the next system of their exploration sector. The
cruiser WarFire appeared out of a similar vortex two hundred kilometers
distant. The two cruisers were far from their support base in search of a
mystery and for future worlds for the Hocklyn Slave Empire to conquer.

The screens
were still covered in static, which was normal immediately after a jump. During
those few brief seconds, his ship was vulnerable. Malken wore light body armor
that was nearly gray in color as was customary for command officers. He stood
nearly two meters tall, and the six digits of his right hand were closed
tightly in a fist as he waited.

“Sensors are
coming online,” the sensor operator reported as data began coming in.

“The WarFire
reports a successful jump,” Second Leader Slith informed Malken as
communications were established with the other ship. “They are moving into a
support position.”

“No other
contacts showing on sensors,” the sensor operator added calmly.

Malken sat
down in his command chair and gazed about the War Room. His ship and the
WarFire were on a special mission. For the last one hundred years, there had
been numerous reports of strange sensor readings and mysterious ships on the
fringe of the empire. These ships had vanished before they could be engaged,
and their system or systems of origin remained unknown.

There had also
been a marked increase in the number of escort cruisers that had been sent out
on exploration missions and failed to return. There was a growing unrest in the
Hocklyn High Council that some new and unknown enemy was systematically probing
the empire’s defenses.

As a result,
the Hocklyn High Council had ordered that all future exploration missions would
consist of two ships. In the past, one ship would jump into a system and scan
it while the other held back in a nearby system and waited for a report. Now,
both ships jumped in so as to be able to engage any enemy they might encounter.
The council was confident that two Hocklyn ships could easily handle any hostile
ship. More pairs of ships had been ordered sent out on exploration missions to
determine if there was an imminent threat to the empire.

It had been
centuries since the Hocklyns had engaged a serious adversary. In that war, the Human
Federation of Worlds had been destroyed at great cost to the Hocklyn attacking fleet.
Now the Hocklyn High Council was worried that another powerful adversary was
waiting in the near future and was behind these mysterious sensor readings and
strange ships that had been detected. The numerous missing escort cruisers sent
off on long-range exploration missions seemed to confirm this. If this
continued, it would be necessary to notify their AI masters.

“Sensors continue
to report nothing in our immediate area other than the WarFire,” Second Leader Slith
reported after speaking with the sensor operator in detail about the system.
“The WarFire is ready to micro-jump farther in system on your orders.”

“Very well,”
First Leader Malken answered as he stood up and gazed impassively at the large
sensor screen. “Set both ships up for a micro-jump and let’s get on with this
exploration mission. The empire is growing impatient to find more worlds to
bring us honor.”

“This system
holds no communications traffic,” commented Slith, gazing over at the First
Leader with his large dark eyes. “This system will hold no honor for us.
Perhaps it is best for us to go on to the next system.”

“Be it as it
may, we have our orders,” rasped Malken, impatiently. “We will scan all the
systems in our search area thoroughly, even if they hold no new civilization to
bring honor to our people.”

A few minutes
later, the two cruisers entered their respective white vortexes and jumped
briefly into hyperspace, to appear several billion kilometers farther in
system. The red dwarf system they were in contained seven planets, none of
which seemed to be inhabited, even though there were three in the liquid water
zone.

Aboard the
Human Federation of Worlds light cruiser StarSearch, a warning alarm suddenly sounded.
The commander instantly focused his attention on his second officer, his
eyebrows arching in a question.

“What do we
have, Mason?” demanded Commander Thomas, feeling apprehensive. It was very
seldom that particular alarm ever sounded.

The alarm
indicated that there had been an unauthorized hyperjump into a neighboring
system. All the systems around Earth and New Tellus for twenty-five light years
were equipped with sensor buoys that could detect hyperjumps. It had been
discovered a few years back that hyperjumps gave off an energy spike when the spatial
vortex collapsed. Since that time, numerous sensor buoys had been placed in all
of the star systems around the new Human Federation of Worlds to detect such
spikes.

The StarSearch
was currently twenty-two light years from Earth on a standard patrol with two
escort destroyers. The 700-meter cruiser was heavily armed and tasked with
maintaining the security of New Tellus, Earth and the other systems of the new
Human Federation of Worlds.

Glenn Mason,
the StarSearch’s executive officer, was standing by the holographic plotting table,
which currently showed all the nearby stars within five light years of the
ship. One of the stars was blinking a troublesome red.

“One of the
hyper detection buoys in Gliese 667C is reporting two unauthorized hyperjumps,”
reported Mason with concern in his voice. He was worried as all Federation
ships, both civilian and military, carried transponders that cleared them with
the buoys.

“Gliese 667C!”
Commander Thomas replied, his eyes widening in alarm. “How many planets are in
that system?”

“Seven, Sir,”
Mason replied as he called up the information on his plotting table. “Only one
is marginally habitable, Caden’s World, and there are several large mining
installations on the planet’s surface. There are approximately twenty thousand
people living in the two mining settlements. There are also twenty defensive
satellites above the mining installations in geostationary orbits.”

“Contact our
escorts and set up a jump,” Thomas ordered with growing unease showing on his
face. “Send a message back to Fleet Command that two unauthorized hyperjumps
have been detected in Gliese 667C, and we are proceeding to investigate.”

A few moments
later, the communications officer reported that the message had been sent. It
would take a few minutes for the message to reach Earth and New Tellus. All the
systems around Earth had FTL communication booster satellites that allowed
quick communication between the planets of the Federation.

Thomas closed
his eyes. For years, they had been expecting the Hocklyns to find the human
worlds that Earth and the Federation survivors had settled. He opened his eyes
and took in a deep breath as he watched his crew set up the jump. He hoped the hyperjumps
detected by the buoy were just a couple of freighters off course with
nonfunctioning transponders. If not, then the war the new Human Federation of
Worlds had been preparing for might have just arrived. It the buoys had only
detected one unauthorized jump he wouldn’t be too concerned, but two were an
indication of something troublesome and possibly dangerous.

“Destroyers Argyle
and Swanson both report ready to jump on your command,” Major Mason reported as
he listened to the incoming reports over his mini-com.

Thomas nodded
his head, knowing he might be taking his ships into a war situation. “I want
the destroyers and us at Condition One when we exit the warp vortex. Have our
two Talon fighters ready to launch if needed. This might just be a false alarm,
but we will take no chances.”

Major Mason
nodded his head as he passed on the orders. He felt tense knowing what might be
ahead. Almost instantly, red Condition One lights began flashing and a warning klaxon
sounded. Mason spoke over the ship’s com system announcing the setting of
Condition.

Aboard the StarSearch,
the crew raced to their battle stations, hoping that this was nothing more than
a routine drill. In just a few minutes, all departments reported the setting of
Condition One.

Thomas leaned
back in his chair at the command console. He gazed at the large viewscreen on
the front wall, which currently showed a myriad of beckoning stars. He hoped
the hyperjumps detected were not Hocklyn exploration cruisers. Thomas knew that
back at New Tellus and Earth his message would cause quite a stir. Additional
forces would quickly be rushed to Gliese 667C, but he couldn’t afford to wait.
If those were Hocklyn ships and they discovered the mining installations, they would
know they had discovered a high tech civilization. If even one of those ships
escaped, it could mean disaster for the human race.

“Jump,” ordered
Thomas, staring straight ahead at the viewscreen. “Let’s find out what’s
waiting for us.”

First Leader
Malken gazed in surprise at the latest data from the ship’s sensors; the system
was inhabited! They had detected several mining installations on the fourth
planet.

“It’s
confirmed, Sir,” Second Leader Slith reported as he turned to face the First
Leader. “Long-range sensor scans have detected two large mining installations
on the planet as well as numerous satellites in orbit. We may yet find honor in
this system.”

“It’s those satellites
that worry me,” replied First Leader Malken, gazing suspiciously at the sensor
data on the main sensor screen. “They are positioned directly above those two
installations, and why are there so many of them? If they were just normal communication
or weather satellites, they would only need six or eight to cover the entire
planet. We are detecting twenty, and they are positioned extremely close
together.”

“Defensive
satellites?” Second Leader Slith said warily, his dark eyes widening at the
thought. “That would indicate they are expecting an attack.”

“Possibly,”
Malken responded as he studied the data on the screen. “Move us in closer, but
keep us out of the planet’s gravity well. I want to get some more detailed
scans before deciding on a course of action. We are too far out to be able to
transmit a message to the nearest fleet base and I want to be prepared to run
if necessary.”

“Run!” blurted
Slith in shock as he took several steps back from the First Leader. “We are Hocklyns;
we don’t run! We will gain no honor running from an enemy.”

“In this case,
we do,” responded Malken in a grave voice, his cold eyes focusing on his second
in command. “We have been losing ships mysteriously for years. Our orders from
the High Council are clear; if we detect any advanced civilizations, we are to
report back immediately. We will suffer no loss of honor in doing so. We will
only be following orders.”