Read This is a Love Story Online

This is a Love Story 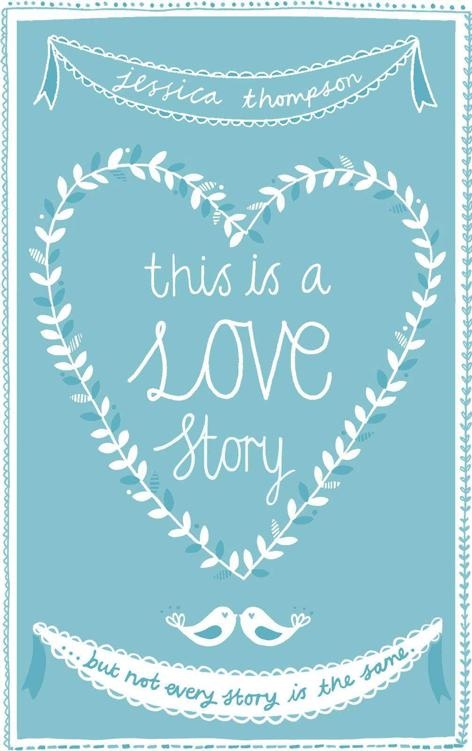 Jessica Thompson is a multimedia journalist working for a series of newspapers in London. Jessica lives in North London and

this is her first novel.

THIS IS A LOVE STORY

First published in Great Britain in 2012 by Coronet

An imprint of Hodder & Stoughton

The right of Jessica Thompson to be identified as the Author of the Work has been asserted by her in accordance with the Copyright, Designs and Patents Act 1988.

No part of this publication may be reproduced, stored in a retrieval system, or transmitted, in any form or by any means without the prior written permission of the

publisher, nor be otherwise circulated in any form of binding or cover other than that in which it is published and without a similar condition being imposed on the subsequent purchaser.

All characters in this publication are fictitious and any resemblance to real persons, living or dead is purely coincidental.

For mum, dad and Louise

There are two people sitting opposite me on the train this morning.

A guy and a girl.

They must be in their mid-twenties.

The guy has thick blond hair, green eyes and sexy freckles dotted all over his nose like stars in a clear night sky.

He’s really handsome but not my type. I feel about him the way I feel about Monet. I appreciate what I see. It’s nice. But not

really to my taste.

I’m guessing his name is Tom, or something like that, and he works in PR. I am drawing this assumption because he’s wearing

what looks like a designer grey suit with a salmon-pink tie.

I like to play this little imagination game sometimes. I’m sure I’m probably wrong most of the time, but it passes a train journey.

She could be a Claire, with long brown hair that’s kind of stringy and ragged, but still seems like it’s all part of a carefully planned

look. She has made an effort to seem like she doesn’t give a shit. I’m a girl, I see straight through it. She wants everyone to think she

She’s got perfectly painted grey nail varnish on, and a pair of tight black jeans with expensive-looking nude ballet pumps.

Claire looks a bit more creative than her public relations man; it’s the jewellery that gives it away – big chunky bracelets and an

eccentric beaded necklace. I reckon she works in the art world, perhaps. Possibly not holding a paintbrush, but maybe in a gallery,

having to explain to people what the artist meant by the scrambled splats on the walls.

She’s probably well educated, with a family who live in Kent but holiday in the Cayman Islands three times a year.

I bet Tom loves her. It looks like he does. He has the aura of a man who won’t be easily distracted. It’s lovely.

One of her legs is up on his lap. She’s reading the paper and he kisses her on the cheek every now and then, looking like these are

the moments that make his world go round. On the way to work with the love of his life.

I let out a deep sigh as I realise I am staring. Plus, I’m being overly romantic. I’m sure they have the same problems as everyone

else – you know, rows about snoring, map-reading and household duties.

I’m thinking that maybe mornings are easier when you are Tom the PR man and Claire the gallery girl, and not me. Sienna

You might be woken by gentle kisses, and that special feeling of skin on skin that you soon take for granted.

Warm breath against your face and knowing that you’re safe.

My mornings are more like being dunked into a vat of cold water.

I flinch as the train pulls away from the station and I recall the start of my day, which I’m sure would’ve been much easier if I had

woken up next to the man of my dreams like Claire, or whatever her name is, did.

The alarm went off at 6.30 a.m., a shrill, piercing scream that made my ears want to burrow inside my head and nestle in the

padded, warm folds of my brain. I just wanted to sleep. I wanted to sink back under the covers, which are soft on my skin and smell

like fresh daisies, and hide from the world. I contemplated calling in sick, but I haven’t been in the job for long enough to be doing

Mornings and I do not go well together, a bit like cheese and jam, or hummus and chocolate. It’s a bad combo.

I dragged my heavy limbs out of bed and pushed my feet onto the smooth wooden flooring, my fringe sticking up into the air like

The soft cocoon I had been lying in was replaced by a cool draft and an urgent need to pee. Like a zombie I plodded into the

bathroom and tried to make sense of the half-light.

After a few minutes of ‘getting ready’, which included stabbing at my mouth with a worn-out toothbrush and attempting to run a

comb through my tangled hair, I felt ready for a shower.

The water came out cold.

It was a little like someone had stored a night’s quota of icy rainfall in a rusty bucket and tipped it all over me.

My eyes opened wide for the first time since waking, my pupils shrinking to the size of pinpricks as I attempted to deal with the

shock. I jumped around to dodge the relentless bullets while I waited for the water to heat up but they were unavoidable.

Then there was the challenge of negotiating the leafy streets of my west London suburb and getting the train to work. In spite of

the shock of the shower, I was still bleary-eyed, and so the pavement seemed to spread out in front of me like a chessboard.

Walking around London in the rush hour is like a platform game. The scoring system goes a little like this:

5 points for not stepping into the giant puddle that always collects at the bottom of Edgley Road.

15 points for successfully overtaking the elderly couple who are blocking the way, without walking into a lamp post.

15 points for buying the last carton of orange juice at the local shop.

20 points for picking up a Metro before they have all been greedily swiped by the grab it for yourself, then throw it away ten

The next challenge was finding a seat on the train. Play it right and you are in for a relatively comfy ride. Play it wrong and you

The train arrived one minute after I got onto the platform, so I weaved through the people, left, right, left, right, and I made it.

But as I sit across from a picture of love that is making me feel acutely depressed about my situation at home, I realise that today, I

am not in the best of moods.

Oh no . . . As Tom pulls a strand of Claire’s hair away from her right ear and kisses it gently I have to look away before I go

insane. So I glance to my left in a bid to escape this doe-eyed display. But in doing so, my eyes meet directly with those of a man

sitting next to me, who just happens to be staring at that moment.

He must be in his fifties, a skinny type with beady eyes and a pair of glasses with lenses so thick they remind me of the bottom of

He smiles awkwardly as he realises he has been caught staring. Because I like to think I’m a relatively nice person, I smile back as

if to say, ‘you know what? It’s ok. Let’s just forget about this and move on’.

I turn away and gaze towards the ceiling; it is obviously a safer option today. But I feel a presence again, my peripheral vision is

telling me this. So I turn my head back and the man is staring again, almost boring his eyes into my cheek. This is no accidental

gaze. He jumps as if he has been caught pilfering grapes from the supermarket.

‘Just stop will you. Please?’, I ask, turning red.

‘Yes, of course. Sorry’, he says in his well-spoken accent, somewhat crestfallen.

Welcome to train life. It is a circus and a zoo all at the same time.

I wonder why invasive behaviour of this nature irritates me so much. Blatant letching goes hand in hand with over-enthusiastic

It’s only my third week at the new job and this daily ritual is all a bit of a shock.

The squash of the rush hour can do such strange things to normal people. Individuals who are usually quite calm find themselves

gritting their teeth, muttering under their breath and trying desperately hard not to decapitate someone with an umbrella.

A woman to my right makes a phone call, and a loud one at that.

Man sitting next to woman grimaces.

This woman is so wrapped up in her conversation that she fails to notice we are approaching a tunnel and then, oh dear.

What a shame. The whole carriage breathes a sigh of relief apart from Tom and Claire who are so wrapped up in their bubble of

love, ducklings and popping candy that they had no idea about it all in the first place.

For a moment we seem to achieve some kind of peace. An idle-looking young man who appears to have been rudely awoken

halfway through a six-month hibernation shuffles back into the corner of his seat. His scruffiness makes me feel better – he has the

look I was sporting within my first hour of waking.

Tense legs start to relax, and daydreamers turn their heads back to the windows, hoping for some kind of escape from this cattle

I balance my tea between my knees, pick up my copy of Metro and try to think of the things I have planned for the day ahead, but

I am quickly distracted by a picture story of a squirrel on custom-built waterskis.

God, I love this paper.

Being a journalist myself, much as I dream of one day uncovering an earth-shattering revelation of the same magnitude as the

expenses scandal, I’d be just as happy writing about small, cuddly animals engaged in bizarre activities like this one.

I look around at other Metro readers. Is anyone else looking at the squirrel? I wonder.

A lady in the row behind the star-crossed lovers is reading, but no, she looks quite sad.

No one is smiling, let alone laughing, and that can’t be right because this is one bloody funny animal.

I keep scanning and my eyes rest on a desperately handsome man in a green T-shirt, sitting across from me, a couple of spaces to

the right. He is smirking; in fact, he is so tickled by something that he has to clear his throat.

Wow. How did I not notice him before?

Maybe he got on the train just a few minutes ago when I was lost in my angry, bitter thought processes.

He looks like he would be tall standing up. Under the T-shirt I can make out a perfectly proportioned torso supporting broad,

handsome shoulders, and atop it all is a face I can’t bear to look away from. My heart catches in my throat and I swallow hard.

He has pure olive skin, dotted across his chin with sexy stubble that creeps up his chiselled jawline like vines on a beautiful house.

His features are strong and bold.