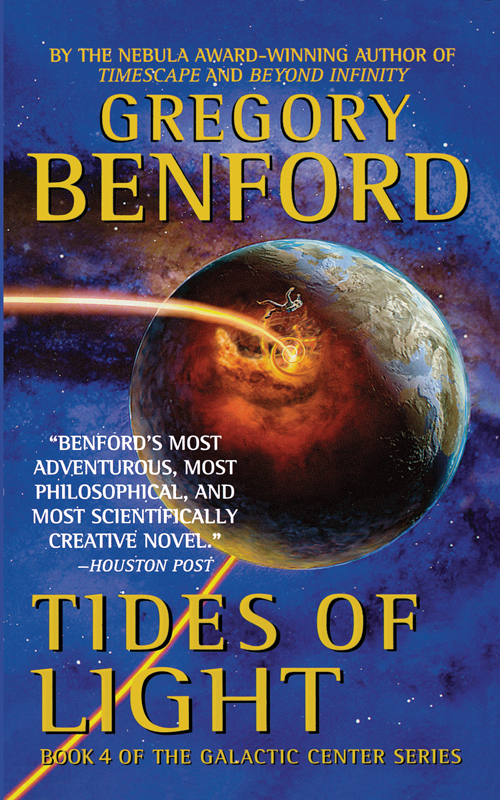 Killeen realized abruptly that the thing was
alive
. Muscles rippled through it. Six sheathed legs curled beneath, ending in huge claws.

And the head—Killeen saw eyes, more than he could count, moving independently on stalks. Beside them microwave dishes rotated.
It had telescoping arms socketed in shiny steel. They ended in grappling arrays of opposing pads.

The thing was at least twenty times the size of a human.

ACCLAIM FOR GREGORY BENFORD’S
CLASSIC NOVELS OF THE GALACTIC CENTER

“A challenging, pace-setting work of hard science fiction that should not be missed.”

“When it comes to conjuring the marvels of space and the bizarre possibilities of high-energy physics, Benford is second to
none.”

The Stars in Shroud

Heart of the Comet
(with David Brin)

Beyond the Fall of Night
(with Arthur C. Clarke)

In the Ocean of Night

Across the Sea of Suns

All rights reserved. No part of this book may be reproduced in any form or by any electronic or mechanical means, including
information storage and retrieval systems, without permission in writing from the publisher, except by a reviewer who may
quote brief passages in a review.

Published in arrangement with Bantam Spectra.

The Aspect name and logo are registered trademarks of Warner Books.

PART THREE: A Matter of Momentum

PART FOUR: Such Men Are Dangerous

SAILING WITH THE TIDE

A HUNGER FOR THE INFINITE

This novel is for two dreamers

who nonetheless get their numbers right:

T
he Cap’n liked to walk the hull.

It was the only place where he could feel truly alone. Inside
Argo
there was always the rustle of movement, the rub of humanity kept two years in the narrow though admittedly pleasant confines
of a starship.

And worse, when he was inside, someone could always interrupt him. The Family was getting better at leaving him alone in the
early morning, he had to give them that. He had carefully built up a small legend about his foul temper just after he awoke,
and it was beginning to pay off. Though children might still rush up to him and blurt out a question, lately there had always
been an adult nearby to tug the offending youth away.

Killeen disliked using implied falsehoods—he was no more irritable in the morning than at any other time—but it was the only
way he could think to get some privacy. So no one hailed him over ship’s comm when he was out here. And of course, no ship’s
officer would dare pass through the lock and seek to join him.

And now there was a much better reason not to come out here. Hull-walking just made you a better target beneath the ever-watching
eyes above.

Out here
. Killeen had been thinking so firmly about his
problems that he had, as was often the case, completely forgotten to admire the view. Or to locate their enemy escort.

His first impression, as he raised his head to let in all the sweep of light around him, was of a seething, cloud-shrouded
sky. He knew this was an illusion, that this was no planetary sky at all, and that the burnished hull of the
Argo
was no horizon.

But the human mind persisted in the patterns learned as a child. The glowing washes of blue and pink, ivory and burnt orange,
were not clouds in any normal sense. Their phosphorescence came from entire suns they had engulfed. They were not water vapor,
but motley swarms of jostling atoms. They spilled forth light because they were being intolerably stimulated by the stars
they blanketed.

And no sky back on Snowglade had ever crackled with the trapped energy that flashed fitfully between these clouds. Killeen
watched a sprinkle of bluehot light near a large, orange blob. Its wobbly curves fattened like ribbed, bruised sausages. It
coiled, clotted scintillant ridges working with snakelike torpor, and then burst into luridly tortured fragments.

Could this be the weather of the stars? Snowglade had suffered from a climate that could turn suddenly vicious, and Killeen
supposed the same could be true on the unimaginably larger scale between suns. Since he didn’t understand the way planets
made weather, or the complex fabric of tides and currents, air and water, it was no great leap for him to suppose some similar
shadowed mystery might apply to the raging lives of stars.

Anger forked through this sky. Behind them spun the crimson disk of the Eater, a great gnawing mouth. It ate suns whole and
belched hot gas. In
Argo’
s flight from Snowglade, which swam near the Eater, they had beaten out against streaming, infalling dust that fed the monster.
Its
great disk was like burnt sugar at the rim, reddening steadily toward the center. Closer in swirled crisp yellow, and nearer
still a bluewhite ferocity lived, an enduring fireball.

Looking outward. Killeen could see on the grandest scale the structure his Aspects told him should be there. The entire galaxy
lurked like a silvery ghost beyond the swarthy dustlanes. It, like the Eater, was a disk—but incomparably greater. Killeen
had seen ancient pictures of the regions beyond the Center, a lake of stars. But that lake did not ripple and churn. Here
tides of light swept the sky, as though some god had chosen Center as her final incandescent artwork. Their target star spun
ahead, a mote among wrack and storm, and all their hopes now bore upon it.

And floating in this seethe, their enemy.

He squinted, failed to find it.
Argo
was nearing the verge of a jetblack cloud. The distant mech vehicle probably lay somewhere within the obliterating darkness
there. Abraham’s Star was struggling free of the massive shroud. Soon
Argo
could peer through the shredding fringes of the cloud to find her planets.

A notion tugged at Killeen but he shrugged it aside, caught up in the spectacle all around him. The heavens worked with ribbed
and scaly light, like luminescent beasts drowning in inky seas.

What were the chances, he wondered, that merely showing himself out here would tempt the mech vehicle to skewer him with a
bolt? No one knew—which, in the paradoxical logic of leadership, was why he had to do it.

Killeen had started this hull-walking ritual a year before, at the urging of one of his principal Aspects, a truly ancient
encased personality named Ling. Revered and respected, the Aspect had been given to Killeen by the Family with high attendant
ceremony in
Argo’
s central hall. Ling was the last remaining true starship Cap’n in the Family chip inventory.
The micromind had commanded a forerunner of
Argo
and had exciting though often unintelligible yams to tell.

Yes, and following my advice is bringing a reward
.

Thinking about Ling had brought the Aspect’s firm, Cap’nly voice sounding in Killeen’ s mind. He let a skeptical frown cross
his face and Ling picked it up.

You make this hull-walk serve the added purpose of displaying your personal calm and unconcern in the face of the enemy
.

Killeen said nothing; his sour doubt would faintly trickle down to Ling, like runoff from a rainstorm. He kept up his pace,
making sure his boots got a firm magnetic clamp on the hull before he freed the following leg. Even if he kicked himself free
of the hull, there was a good chance that his low trajectory would carry him into a strut or an antenna down-hull from him.
That would save the embarrassment which he had often suffered when he had started this ritual. Five times he had been forced
to haul himself back to the ship using a thrown, magnet-tipped line. He was sure crew had seen it, too, and had gotten a good
laugh.

Now he made it a point not to have his line even within easy reach on his belt. He kept it in a leg pocket. Anyone watching
him from the big agro pods downhull would see their Cap’n loping confidently over the broad curves of the
Argo
, with no visible safety line. A reputation for dashing confidence in his own abilities might come in handy in the difficult
times to come.

Wiseguys In Love by C. Clark Criscuolo
Nivel 26 by Anthony E. Zuiker
Anything but a Gentleman by Amanda Grange
Faking It by Carmack, Cora
The Miracles of Prato by Laurie Albanese
(Book 2)What Remains by Barnes, Nathan
Class Four: Those Who Survive by Duncan P. Bradshaw
God's Gift by Dee Henderson
Bella #1 (Sagatori Family Saga #1) by Kimberly Blalock
Betrayal by Christina Dodd