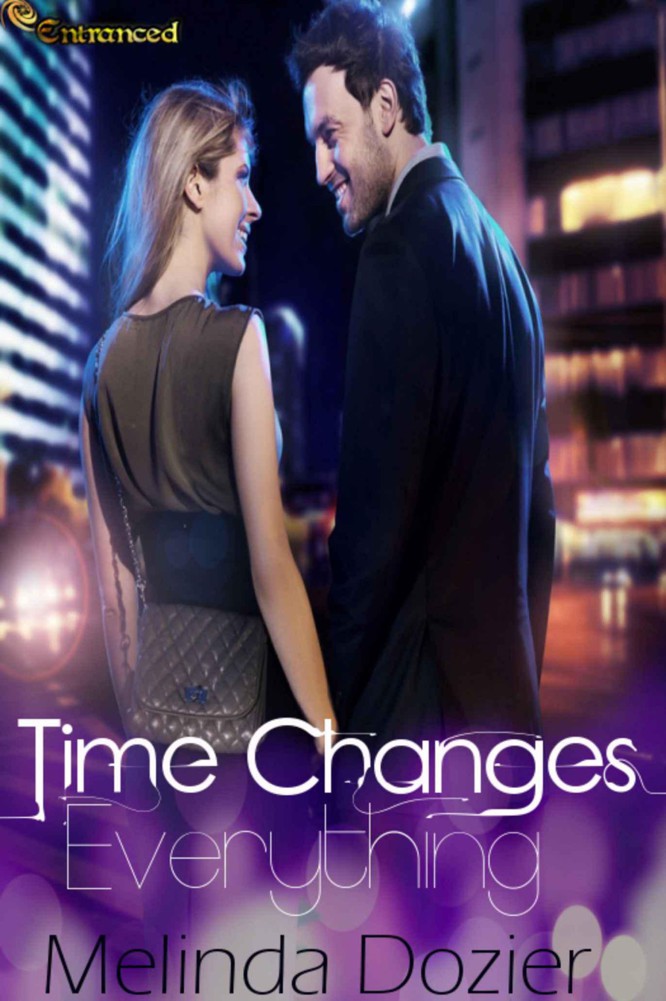 All rights reserved. Ebooks are not transferable. This book or any portion thereof may not be reproduced or transmitted in any form by any means, electronic or mechanical, including photocopying, recording, or by any information storage system without the express written permission of the publisher except for the use of brief quotations in a book review.

This book is a work of fiction. Names, characters, places, and incidents either are products of the author’s imagination or are used fictitiously. Any resemblance to actual persons, living or dead, events, or locales is entirely coincidental.

To my husband, Rafael, who without his encouragement I would have never finished this. Love you!

Thank you to my two wonderful editors, who I learned so much, Eden Plantz and Ashley Christman. Thank you for giving me a chance. I owe a deep gratitude to my faithful critique partners – Brittney Rhondeau, Kimberly Sullivan, Linda Gillis, Rachelle Ayala, Jennifer Printy and Judester. Without this armful of women, I would’ve never made it this far. Finally, thank you to my three boys who endured too many pizza nights and Saturday mornings without my full attention. I love you Matt, Jona and Mikey!

Amanda Larson is dedicated to her job and doesn’t want to make time for anything else. Until she runs into Jake Edwards. He used to be the cute boy next door; now he’s a sexy, big shot lawyer.

Jake Edwards isn’t interested in commitment. He’s successful, sexy, and single–and that’s how he likes it. When he reconnects with Amanda, Jake realizes he might have to rethink his philosophy on the carefree, bachelor lifestyle.

But, is it too late for them? Or can he convince her that he’s ready to give her his heart?

AMANDA’S PRIORITIES FOR THE
evening did not include a night of playing hide-and-touch-boy-toys with her friends. But over the years, her roommate’s birthday had become a ritual, so she couldn’t back out.

She took a deep breath and walked down the steps of the newest after-work hotspot, Manahatta’s Bar and Grill.  The second she opened the door, music rushed to her ears. She moved through the tangle of bodies, passing the bar stacked with shot glasses and alcohol bottles, to the back of the restaurant where her friend waited. Chloe waved Amanda over while she tried to shimmy herself into the booth.

“How can you squeeze into a booth wearing a tight skirt like that?” Amanda placed her Donna Karan purse on the seat and slid in, at the same time admiring the new matching shoes--her early-morning splurge to celebrate her latest accomplishment.

Chloe plopped down with her legs straight out. “It’s my birthday. Gotta look good for the minions.”

Amanda eyed her roommate’s long blonde hair with its golden highlights sparkling under the light. “You look great. I love your new hair color. It’s a younger you.” She fluffed out her own light brown hair, letting the waves cascade around her shoulders. She could probably use some highlights, too. Too bad she didn’t have time.

Chloe’s leather skirt scraped against the booth’s vinyl. She pulled at her bra straps through her sweater and sat up straight. “I hate turning twenty-nine. One year closer to thirty. I’m getting so damn old. I need to find a youthful playmate tonight.” Chloe looked around the bar at her options.

Life was never boring around Chloe, her oldest friend from the city.  Amanda smiled. It was good to get out. Without a doubt, it’d be fun to watch her chase after the young businessmen or fresh interns.

Chloe opened her compact mirror and applied lip-gloss. “I appreciate you showing up tonight. I was half expecting you to call and cancel.”

“I know I’ve been busy with work, but I wouldn’t miss your birthday.” Amanda pulled out her smartphone and checked her messages. She was expecting that new marketing expert to send numbers from the Michael Kors line – her favorite. Then there was Denalo. The fashion mogul who’d just altered her life.

With one phone call this morning, everything changed.

Chloe jerked her hand over Amanda’s and pushed the phone down. “Talk to your designer specialists later. Tonight is girls’ night.”

Amanda sighed, then smirked when Chloe waved at a tall, dark figure standing in the shadows. “You’re right. But, I will point out that you just said you wanted a plaything tonight. So, I don’t think it’ll be entirely a girls’ night.”

The waiter approached the table just as Veronica appeared at the door. Veronica’s dark hair hung loose tonight, down her back in sleek, auburn waves. Wispy bangs fell across her forehead, bringing out the blue of her eyes.

Amanda waved her over and Veronica proceeded to slink through the crowd, past the high tables and chairs. She wore a black turtleneck, slacks, and boots. Unlike Chloe’s carefree manner, Veronica held her purse close to her chest, as if she were afraid to touch anyone, keeping her eyes on their booth in the back.

“We’ll have three vodka martinis,” Amanda told the waiter. She closed the sticky menu. “And the bruschetta.”

Veronica kissed Chloe and Amanda on the cheeks and sat next to Chloe. “Happy birthday..”

“Thanks. Now I’ve got my two besties with me. Let the fun begin.”

“But not too much.” Veronica glared at Chloe. “The last time we did this, I carried you home. I’m not up for it tonight.”

“Who put an umbrella up your tutu? Have some fun,” Chloe said.

Amanda wiped her fingers on a napkin and laughed.

“So, what kind of fun are you two expecting?” Chloe scanned the place. “Jeff’s here tonight. He’s an eyeful.”

A tall, muscled waiter stood at the register that spit out tickets. His shoulders were a yard wide and he had a powerful profile that Amanda would normally find attractive. Except tonight. When he saw the ladies staring at him, his smile grew, his teeth strikingly white in his tanned face. Amanda looked away, uninterested. “No thanks.”

“That’s fine with me. One less female to compete with.” Chloe studied Amanda. “Why don’t you go out anymore?”

“Yeah,” Veronica rested her elbows on the table. “I heard Pete from acquisitions asked you out last week and you blew him off.”

Amanda squinted her eyes. “I’m not interested in dating. The last thing I need is another dominating male in my life.”

Jeff placed three martinis and a platter of bruschetta on the table. He leaned his body-builder forearms on the table and faced Amanda. “Nice to see you here tonight.”

She lowered her eyes and exhaled slowly out of her nose. Why does he stare at me like that? Sure, he’s not bad looking, but Chloe is the one interested.

Veronica choked on her drink. “It’s Chloe’s birthday. You’ll have to excuse her.”

“No problem. I’ll be back later to check on you.” He winked at Chloe, looked once more at Amanda, and strolled away.

Veronica laughed. “Chloe! What were you thinking?”

“Break it up you two.” Amanda leaned forward. “I have some news.”

“Oh my God. You met the man of your dreams and you’re eloping to Vegas.” Chloe slumped back in a mock swoon.

“Yeah, sure.” Amanda held her hands to her chest, barely able to contain her excitement. “Denalo hired me to head Front Operations of his Valentine show.”

The girls clapped and whistled.

Veronica sighed. “I’m so jealous. I’m only a lousy accountant.”

“Stop, Vero. I’m just lucky I travel so much. That’s how I met Denalo. In Paris.”

Chloe winced. “I can’t help but relate Paris to that creep, Dominic.”

Amanda puckered her lips. “Keep him out of this. That’s over. History. Finite. I really don’t want to talk about a boyfriend right now.” Dominic wasn’t the best boyfriend in the world
--domineering jerk was more like it--but the breakup hurt. She had to keep her mind busy. Concentration was essential. Plus, Mr. Right was only a myth, so why waste her valuable time? Work sustained her and filled up her lonely hours.

Veronica reached over and hugged her. “Seriously, I’m really proud of you. You’ve dreamed of heading up a fashion show since you graduated.”

“He offered the apprenticeship starting today.”

Amanda shrugged. “Well, it’s no problem. Work is all I think about anyway.”

“Yeah, but you’re going to be too busy. We won’t even see you.” Chloe pouted.

Amanda’s chest expanded with warmth. “It’s already planned. Work during the day at Macy’s and my nights will be devoted to the show.”  Even though she hadn’t found a decent man to share her life with, she had steadfast friends. Chloe always pushed Amanda to do what she dreamed, so she had to know this was important to her. Busy or not, she had to do this. “Don’t worry. We’re roommates. We’ll have to get together to pay the bills,” Amanda encouraged.

Chloe leaned forward. “Yeah, but, who’s going to come out with me and help me find the perfect man?”

“You know I never do that with you anyway. Plus, relationships always equal drama. No time. ” Amanda raised her hands and bellowed, “I feel free and alive.”

Highland Grace by K. E. Saxon
Last Train from Cuernavaca by Lucia St. Clair Robson
Stratton's War by Laura Wilson
All Shall Be Well by Deborah Crombie
Within Striking Distance by Ingrid Weaver
Embrace the Highland Warrior by Clenney, Anita
Facing the Hunchback of Notre Dame by Zondervan
The Scoop by Fern Michaels
The Eloquence of the Dead by Conor Brady
El hombre de arena by E.T.A. Hoffmann