Read What A Scoundrel Wants Online

What A Scoundrel Wants 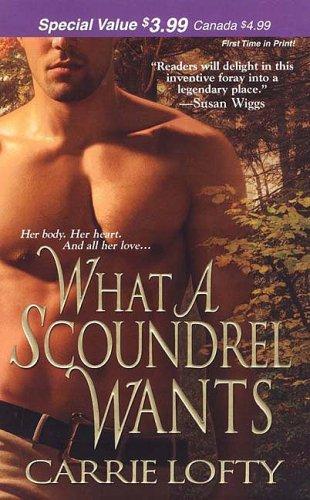 Good sense said Meg would pull away. She had taken offense before, but this time she did not retreat. Her fingertips curled into the muscles of his chest and scored him with blunt fingernails. Tipping up her chin, she brought her mouth closer. Their breath mingled, the only heat in the forest, until she claimed Will Scarlet with a kiss.

My special thanks to Hilary Sares and Caren Johnson for making this book possible.

Will you hear a tale of Robin Hood,
Will Scarlet, and Little John?
Now listen awhile, it will make you smile,
As before it hath many a one.
“Robin Hood and the Peddlers”
Folk ballad, nineteenth century
Chapter One
“You, Scarlet, you are always moody here.”
—Robin Hood
The Foresters: Robin Hood and Maid Marian
Alfred Lord Tennyson, 1892
Near Melton Mowbray, England
Autumn, 1199
Will Scarlet hated trees. Any trees.
Woods. Holts. And Sherwood Forest, most of anything.

Although Sherwood lurked at the end of a long day’s ride to the northwest, Charnwood Forest taunted him with its resemblance. The stink of rotting leaves crawled into his nose. Noises like chattering goblins sounded through the ever-moving branches. Even at noontide, details hid within clusters of shadow.

A shiver skimmed his backbone. Crouched in the ferns, he glanced to see if the other dozen men working for Sheriff Finch noticed his nerves, but they remained intent on their task.

“God grant me leave from this hell pit,” he muttered, crossing himself.

Sinking a knee-guard into the loam, he leaned forward along the road to Nottingham. Four warhorses slowly approached, riding out of Melton. Struggling fingers of sunshine burnished the mail of the foremost riders. One’s lax posture suggested a light sleep, while another carelessly held the reins of his plodding mount. Slender-bodied horses followed, bearing riders in stately dress and the crest of the Earl of Whitstowe.

Will’s superior, Roger of Carlisle, a close confederate of the Sheriff of Nottingham, stepped from the cover of brush. The nearest horses snorted and shied. Riders jerked to attention, raising flattop shields and unsheathing swords in a cold song of steel sliding along steel.

The earl’s foremost guard, a gaunt man with ruddy cheeks, raised a gloved hand and brought the procession to an abrupt halt. “Who goes? Away now, man.”

“No.” Carlisle crossed thick arms across his chest. The boiled leather he wore made his stout, muscular body appear even more formidable. “I shall speak to Lord Whitstowe.”

The earl himself nudged his horse forward. “What’s the meaning of this?”

“I am Roger of Carlisle. I represent the Sheriff of Nottingham, Peter Finch.”

Lord Whitstowe pushed back the hood of his embroidered surcoat, scowling. “My party has not reached the Nottinghamshire boundary. What business have you here?”

“Milord, you hold lands in both shires. Your obligation to King John is to protect these forests from poachers and itinerants.”

Whitstowe’s face darkened. “You lark about in the road and dare remind me of my duty to His Majesty?”

“I do, milord, on behalf of the sheriff, because you’ve failed to obey that duty.”

Holding his balance, Will flexed his feet. Reputation held Whitstowe to be a man with sense as good as his breeding, but with a history of defying royal edicts regarding quitrents and armies. He deemed a number of royal demands wasteful and, on that excuse, disregarded them.

Hiding in trees usually meant trouble. But perhaps dealing with stubborn nobles required Carlisle’s dramatic methods—forcing an audience in the road like a highwayman. A recollection of the wage Will stood to earn smoothed his sudden unease.

The second of the two lead sentries wore a conical steel cap, a nosepiece obscuring his face. He guided his warhorse between Carlisle and the nobleman. “You dare speak to Lord Whitstowe thus? Show respect, man!”

“Milord, I will not,” said Hendon. “His insolence cannot be borne. You there, clear out of the way!”

Carlisle grinned. “You clear out. I have matters to discuss with your liege, gelding.”

From all around, Carlisle’s men jumped from their cover and rushed the procession. Cries and scorns slit the air as the two factions brought to blows. Swords bashed together with force enough to loosen teeth. Horses reared high. Arrows flew. A masterful shot pierced the neck of the first, ruddy-faced guard, dropping him dead at the hooves of the earl’s horse.

Will watched in mute horror. Time blurred into a chaos of motion and violence. He should move. He should fight. But motives and meaning escaped him. How could he know which side to take if he hardly understood what sparked the fray?

A scream ripped through the impassive trees.

A woman? By the best!

Before he could deliberate, he leapt from his scrubby cover. No woman deserved to be caught out when men met with flaying swords.

He trained in on the echo of her distress and sped through a tangle of struggling bodies and deadly armaments. When he could evade direct conflict, he parried or ducked. But when he faced one of Lord Whitstowe’s men in an unavoidable duel, he lunged.

Fully a hand taller, the challenger pivoted and swung his sword. The long, deadly blade caught Will on the left arm, imbedding in muscle and leather-lined mail. Pain surged at his shoulder. He cursed, twisting and setting the other man off kilter.

Despite the torture of his injury at every flex and move, he gripped the sword with both hands. Again he lunged, pushing and attacking. The demand for survival and that ancient need to aid a woman in distress inflamed his assault. His physical responses slowed, but his mental acuity quickened. He waited for any misstep. When the man briefly exposed his neck, Will hacked through flesh with a sickening chop of steel.

The soldier gurgled and paled. Will wrenched his blade free, snaking from under the flaccid corpse as it collapsed. Blood coated his gloves and bile filled his mouth.

He spat, turning to behold another slaying—a slaying that turned his stomach more cruelly than the wound he suffered. Hendon, the earl’s guard whose charge had sparked the fight, pulled his liege to the ground and bared his throat. The single slice of a dagger ended Whitstowe’s life.

Stance relaxed, weapons lowered, Roger of Carlisle looked on. A grin stretched the weathered skin of his face.

They are in league?

When he met Carlisle’s eyes, a cold sluice of understanding slid down Will’s back. Treason. A plot. And he was stuck in its midst.

Another scream sprouted goose bumps on his neck.

He wheeled from the duplicitous butchery to find a woman in blue seized by Dawes and Munro, two of Carlisle’s men. Dark stains of anonymous blood discolored their hands and tunics. The woman thrashed, whipping her head free of attempts to stifle her hysterics.

Distracted by their writhing quarry, the pair did not see Will’s furtive advance. He sliced Munro’s calf—a man who, minutes before, had hidden in the roadside bushes beside him, both in the employ of Sheriff Finch. Munro screeched and rolled, clutching a hunk of ruined muscle.

Dawes hauled the woman in front of his body, using her as a slender and uncooperative shield. A blade pressed to her neck calmed her struggles. “Stay where you are, Scarlet, or I’ll kill this comely prize.”

Will sheathed his sword and held bloodstained gloves face-up.

“No draft, Dawes,” he said. “I killed one of the earl’s men, same as you.” He stepped closer—once, twice. With a wink, he unceremoniously hiked his tunic and began to unfasten his breeches. “She’ll be reward enough for both of us.”

Dawes blinked, a moment of hesitation. From a fold at his waist, Will retrieved an anlace and leapt. He drove the petite dagger up and into the soft flesh beneath Dawes’s chin.

Only when his opponent fell did Will look at the woman. She knelt, her eyes downcast. An outmoded, saffron-colored cowl covered her head and draped around her face. Recognition pounced on him.

But I arrested her in Nottingham.

Plots and double crosses teased just beyond his understanding. He felt like the only reveler left without a partner at the beginning of a dance.

He touched her. Flinching and screaming again, she pitched and drove her shoulder into his gut. The unexpected assault upset his balance, toppling him to the ground. Breath erupted from his lungs. The woman landed astride his torso and slammed a fist into his ear. He grunted, then roared when another flailing fist connected with his wound. Catching hold of her slender waist, he flipped her away.

Carlisle’s shouts to his men thundered in his brain, banishing thought. Only instinct remained. He claimed the woman’s wrists and dragged her to the nearest horse. The agonizing ache of his injury made him clumsy, but dread pumped strength into every movement.

“Without lies, I mean you no harm.”

He propelled the woman and her entangling skirts into the saddle and mounted behind her. Dark, curled hair made untidy by rough treatment poked from the cowl, tickling his nose. She smelled of damp leaves, sunshine…and vinegar?

Will gouged the horse with his heels and made their escape.