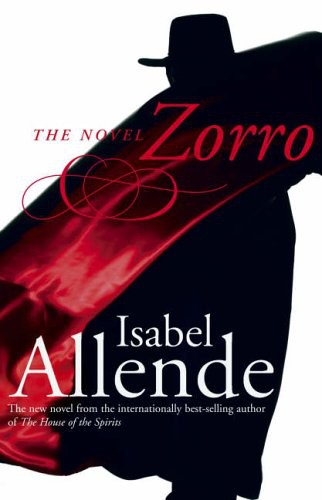 If admirers of the exquisitely talented novelist Isabel Allende had to pick the least likely subject for a novel by her, it would probably be the swashbuckling yarn
Zorro
. But that's exactly what Allende has tackled, and with her first adult novel since 2001’s
Portrait in Sepia
--and the result (against all the odds) is a conspicuous success.

It is, after all, something of a surprise that Allende proves herself so adept at a novel chronicling the adventures of this masked superhero figure of the old world. In such books as her signature novel
The House of the Spirits
, the author's territory has been the careful and insightful delineation of human character against richly atmospheric settings. Swashbuckling adventure has hardly been her metiér, but in some ways
Zorro
proves to be a more successful resurrection of the much-loved tale than the rather self-conscious Antonio Banderas movie incarnation.

Diego de la Vega is a man caught between two societies: he inherits his aristocratic background from his Spanish father, a high-ranking military officer who has become a landowner. His mother, however was a Shosone Indian, and it is from his Indian grandmother that he absorbs Indian ways, while achieving the unparalleled swordsmanship skills of his father. As his country suffers under the yoke of Napoleon's autocratic rule, Diego becomes a member of la Justicia, an underground movement dedicated to the overthrow of the tyrant. He then finds himself called upon to use his warrior skills to deliver those around him--and to confront a deadly rival.

Of necessity, the character drawing here has to be on a larger scale than we are used to from Allende, but she is still able to freight much of her subtle observation into the colourful canvas that is
Zorro
. Will her long-time admirers be able to accept such a radical change of pace from the author of
The House of the Spirits
? If they can't, they are doing themselves a disservice--and those addicted to novels of high adventure can add a new title to their lists.--
Barry Forshaw

‘Heroism doesn’t come more mysterious or more dashing…Pacy and atmospheric, this is a tale of love, rivalry and the pursuit of justice.’ Mail on Sunday 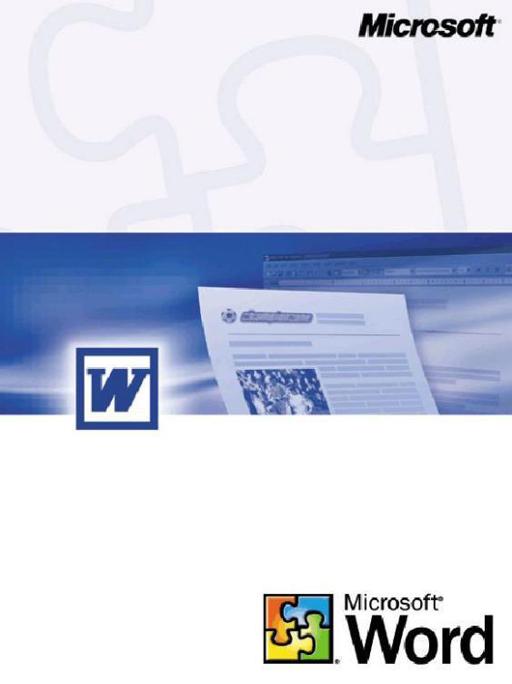 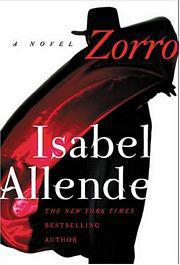 Translated from the Spanish by MARGARET SAYERS PEDEN

The right of Isabel Allende to be identified as the author of this work has been asserted by her in accordance with the Copyright, Designs and Patents Act 1988

This is the story of Diego de la Vega and of how he became the legendary Zorro. At last I am able to reveal his identity, which for so many years we kept secret, though I do so with some unease, since a blank page is more intimidating to me than the naked swords of Moncada’s men. With this document I intend to set the record straight before the slanderers who are determined to defame Zorro have their say. Our enemies are many, as is often the case with those who defend the weak, rescue damsels in distress, and humiliate the powerful.

Naturally, every idealist attracts enemies, but we prefer to count our friends, who are much greater in number. I am compelled to recount these adventures because it serves little purpose for Diego to risk his life for the sake of justice if no one knows of it. Heroism is a badly remunerated occupation, and often it leads to an early end, which is why it appeals to fanatics or persons with an unhealthy fascination with death. There are all too few heroes with a romantic heart and a fun-loving nature. Let me say it straight out: there is no one like Zorro.

Let us begin at the beginning, at an event without which Diego Ie la Vega would not have been born. It happened in Alta California, in the San Gabriel mission in the year 1790 of Our Lord. At that time the mission was under the charge of Padre Mendoza, a Franciscan who had the shoulders of a woodcutter and a much younger appearance than his forty well-lived years warranted. He was energetic and commanding, and the most difficult part of his ministry was to emulate the humility and sweet nature of Saint Francis of Assisi. There were other Franciscan friars in the region supervising the twenty-three missions and preaching the word of Christ among a multitude of Indians from the Chumash, Shoshone, and other tribes who were not always overly cordial in welcoming them. The natives of the coast of California had a network of trade and commerce that had functioned for thousands of years. Their surroundings were very rich in natural resources, and the tribes developed different specialties. The Spanish were impressed with the Chumash economy, so complex that it could be compared to that of China. The Indians had a monetary system based on shells, and they regularly organized fairs that served as an opportunity to exchange goods as well as contract marriages.

Those native peoples were confounded by the mystery of the crucified man the whites worshipped, and they could not understand the advantage of living contrary to their inclinations in this world in order to enjoy a hypothetical well-being in another. In the paradise of the Christians, they might take their ease on a cloud and strum a harp with the angels, but the truth was that in the afterworld most would rather hunt bears with their ancestors in the land of the Great Spirit.

Another thing they could not understand was why the foreigners planted a flag in the ground, marked off imaginary lines, claimed that area as theirs, and then took offense if anyone came onto it in pursuit of a deer. The concept that you could possess land was as unfathomable to them as that of dividing up the sea. When Padre Mendoza received news that several tribes led by a warrior wearing a wolf’s head had risen up against the whites, he sent up prayers for the victims, but he was not overly worried; he was sure that San Gabriel would be safe. Being a communicant of his mission was a privilege, as demonstrated by the number of native families that sought his protection in exchange for being baptized, and who happily stayed on beneath his roof. The padre had never had to call on soldiers to “recruit” converts. He attributed the recent insurrection, the first in Alta California, to abuses inflicted by Spanish troops and to the severity of his fellow missionaries. The many small local tribes had different customs and communicated using a system of signing. They had never banded together for any reason other than trade, and certainly not in a common war.

According to Padre Mendoza, those poor creatures were innocent lambs of God who sinned out of ignorance, not vice. If they were rebelling against the colonizers, they must have good reason.

Father Mendoza worked tirelessly, elbow to elbow with the Indians, in the fields, tanning hides, and grinding corn. In the evenings, when everyone else was resting, he treated injuries from minor accidents or pulled a rotted tooth. In addition, he taught the catechism classes and arithmetic, to enable the neophytes, as the baptized Indians were called, to count hides, candles, corn, and cows, but no reading or writing, which was learning that had no practical application in that place. At night he made wine, kept accounts, wrote in his notebooks, and prayed. By dawn he was ringing the church bell to call people to mass, and after morning rites he supervised breakfast with a watchful eye, so no one would go without food. For these reasons and not an excess of self-confidence or vanity he was convinced that the rebelling tribes would not attack his mission. However, when the bad news continued to arrive for several weeks, he finally paid attention. He sent a pair of his most loyal scouts to find out what was happening in other parts of the region; in no time at all they had located the warring Indians and gathered a full report, owing to the fact that they were received as brothers by the very Indians they were sent to spy on.

They returned and told the missionary that a hero who had emerged from the depths of the forest and was possessed by the spirit of a wolf had succeeded in uniting several tribes; their goal was to drive the Spanish from the lands of their Indian ancestors, where they had always been free to hunt. The rebels lacked a clear strategy; they simply attacked missions and towns on the impulse of the moment, burning whatever lay in their path, and then disappearing as quickly as they had come. They filled out their ranks by recruiting neophytes who had not gone soft from the prolonged humiliation of serving whites. The scouts added that this Chief Gray Wolf had his eye on San Gabriel, not because of any particular quarrel with Padre Mendoza, whom he had nothing against, but because of the location of the good father’s mission. In view of this information, the missionary had to take measures. He was not disposed to lose the fruit of his labor of years, and even less disposed to have his neophytes spirited away. Once they left the mission, his Indians would fall prey to sin and return to living like savages, he wrote in a message he sent to Captain Alejandro de la Vega, asking for immediate aid. He feared the worst, he added, because the rebels were very near by; they could attack at any moment, and he could not defend himself without adequate military reinforcements. He sent identical missives to the Presidio in San Diego, entrusted to two swift horsemen using different routes, so if one were intercepted the other would reach the fort.

A few days later Captain Alejandro de la Vega galloped into the mission. He leaped from his horse, tore off his heavy uniform jacket, his neckerchief, and his hat, and thrust his head into the trough where women were rinsing their wash. His horse was covered with foam; it had carried its rider many leagues, along with all the gear of the Spanish dragoon: lance, sword, heavy leather shield, and carbine, plus saddle. De la Vega was accompanied by a couple of men and several packhorses loaded with supplies. Padre Mendoza rushed out to welcome the captain with open arms, but when he saw that he had brought only two trail-weary soldiers as depleted as their mounts, he could not disguise his frustration.

“I am sorry, Padre. I have no available soldiers other than these two good men,” the captain apologized as he wiped his face on his shirtsleeve. “The rest of the detachment stayed behind in Pueblo de los Angeles, which is also threatened by the uprisings.”