Read All I Need Online 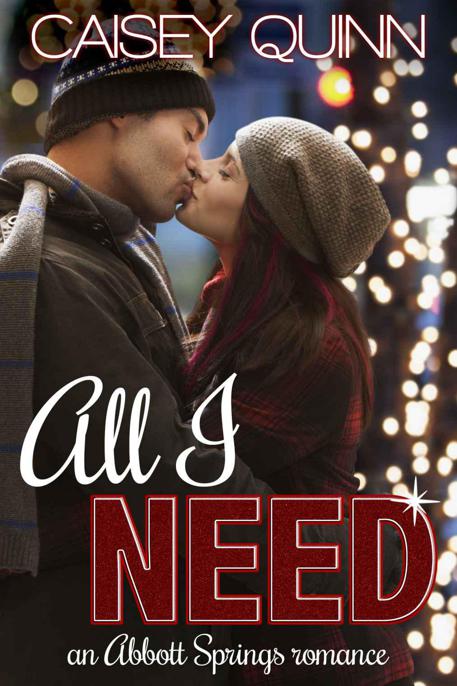 All I Ever Wanted

Winterfest is heating up in Abbott Springs...

As the town’s yearly festival kicks off, cold days turn into steamy nights, new flames will be ignited, and old romances will be rekindled.

All pink-haired rocker chick Everly Abbott thought she wanted was acceptance in her straight-laced hometown. But her best friend and bandmate Justin Cohen is about to show her that what she thinks she wants isn’t necessarily what she needs.

For my Jubb, you'll always be a rockstar to me.

I
didn’t know how I let Bree talk me into this. But she was leaving for France on Sunday, so who knew when I’d see her again? I couldn’t even imagine what the next year would be like without her. She’d had to leave last night’s show early to get back to Abbott Springs for Winterfest. And thanks to her coercing, now I was headed there too. To perform. Which I swore I would avoid at all costs.

She rarely missed one of my shows, but that was about to change. I blocked the idea of her no longer being in the same country as me out of my head. I had enough to worry about as it was.

Truthfully, the only thing I could think as I stared out the window on the way from our performance at Peabody’s to Abbott Springs was,
There is a lot of fucking corn in Ohio
.

This past year while touring with my band, I’d tried my damnedest not to think about home. I didn’t spend much time there—just popped by my mom’s house occasionally to do laundry, which tended to pile up when one lived out of cheap motels and a van. But my friends and I had a tradition. One we were keeping apparently.

Every year we met up at Winterfest and then got together at our town’s somewhat famous covered bridge for a midnight toast after the festival ended. This was pretty much the only time I spent more than a night in Abbott Springs. And there was a good reason for that. One I was trying really hard to ignore. But speeding toward Abbott Springs made that pretty much impossible.

“Jubb, you can slow down, dude. The festival isn’t going anywhere. We’ll make it.”

Justin “Jubby” Cohen had been my best friend since middle school. Back when he was chunky and I was punk rock in a town full of polo shirts. Now he was all chiseled muscles tatted up to hell and back and I was still, well…I was still me.

I fingered a bright pink strand of my hair before blowing it out of my face. Some redheads couldn’t pull off pink streaks. I might’ve been one of them. Not that I cared.

“Ev, we have an hour to get there, set up, and get a soundcheck in. You think our beloved townies are going to give a shit if there’s enough feedback in the mics to attract water buffalo?”

After huffing out a breath, I leaned back in my seat. Damn, I didn’t want to do this.

Don’t get me wrong, I’d performed at some shady dives. A few where the band stood behind protective bars to keep the less-than-classy clientele at bay. But performing at Abbott Springs’ Winterfest was basically my worst nightmare come to life.

In ninth grade I sang in the school talent show. I had ears. I knew I had a decent voice. But I was booed. Literally heckled into tears until I fled from the stage like my leather pants had caught fire. I could still hear them.

Dyke! You suck! No one likes you, freakshow!

I barely stifled a painful shudder just thinking about it.

Those movies, where the shy outcast chick won everyone over with her angelic voice when she got the courage to sing in front of the whole school…yeah, that was a steaming pile of bullshit.

But that was then. My music had changed me. I wasn’t the pink-haired freak who hid in the girls’ bathroom anymore. At least I was damn sure trying not to be. It had been two years since my high school graduation. I was mostly over it. But this place had a strange effect on me. The closer I got to it, the closer I got to that same old inadequate version of myself.

I was still afraid of being booed off stage, but I was even more nervous about facing someone I’d successfully avoided for the past year. No doubt he would be at the festival this year. And I couldn’t very well just hide in the crowd since I was going to be on stage.

Jubby reached forward to turn down the radio. My eyes lingered on his tan, muscular forearm before trailing up his thick-banded biceps to the black T-shirt straining against his broad chest.

A few other things had changed in the past few years. As soon as we were old enough to make our own money, my once-pale, chunky, glasses-wearing best friend got contacts and a job with his uncle’s roofing company.

And
day-um
. Roofing did a body
good
. Not that I’d noticed or anything.

“They’re not going to boo you,” he said softly. “Believe it or not, most of them have grown up since the ninth grade.”

My fists clenched and I turned to glare at him. “Oh yeah? Just because you got all buff and fucked all the cheerleaders who gave you hell, suddenly they’re the salt of the Earth?”

So maybe I was still slightly bitter.

He shook his head. I couldn’t see his clear blue-green eyes behind his aviators, but I would’ve bet they were gleaming with amusement.
Yuck it up, assface.

“I didn’t fuck all of them. Some I just let blow me.” He shrugged, and his words did something to me I wasn’t expecting. I was pissed and annoyed and…something I didn’t have a name for. It was a twisty, weird emotion I wasn’t familiar with and didn’t care for
at all
. The urge to slap that smirk straight off his face nearly overtook me.

“Lucky girls.” I snorted and turned The Lumineers back up. Because I knew it bugged the hell out of him, I reared my seat back and propped my feet on the dashboard.

Jubb turned the radio down once more. Apparently aggravating me to death was on his list of things to do today. “Stop making it about them. Treat this like every other show. Sing your ass off and if they don’t like it, to hell with ‘em.”

Right. It wasn’t like I’d spent my entire adolescence trying to find myself in the approval of the same faces that were probably about to sneer at me as I bared my soul on stage. No pressure.

I bit the skin off the side of my thumb and kept my gaze trained on the view out the window. Cows. Corn. More corn. It blurred by, reminding me of a scene from Forrest Gump, even though I hadn’t seen that movie since I was twelve years old.