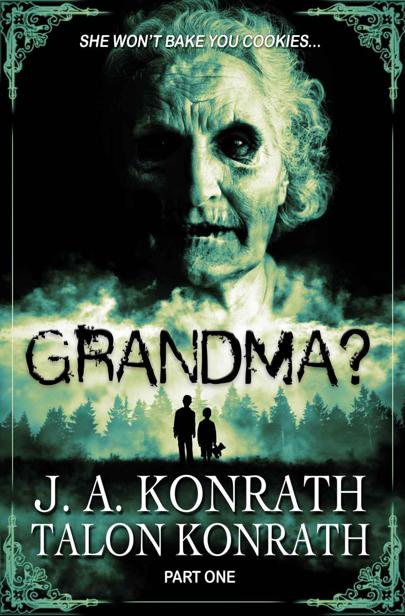 Back in in the year 2000, I used to show off my two-year old son, Talon, by asking him in front of guests how to kill a zombie.

I also accepted
decapitation
as an answer.

A few months ago, I popped into Talon's bedroom to show him the latest Jon Lajoie video on YouTube, and I saw him typing away at his computer.

My wife and I had always told Talon he could be whatever he wanted when he grew up, after he got his medical degree. I knew from experience that being a writer was tough, and I figured this was just a phase he was going through.

But he kept at it, even with zero encouragement from me. And he didn't ask me to read it, either. He has a big shot author as a father, and apparently had no interest in my opinion. So I asked to read it, expecting the worst.

I was surprised how much fun it was. I wasn't surprised that it was a zombie story. We'd been watching zombie movies, and playing zombie videogames, since he could walk.

So I asked him what he wanted to do with the story, and he shrugged.

"With a bit of work, we could self-publish it," I told him. "It needs some rewriting, but I can help."

"Think it could make money?" My fifteen-year-old son makes $40 a week allowance for taking out the trash and cleaning up after our three dogs.

"I dunno. We could sell it for a dollar. Each sale will earn 35 cents."

"On a good week, five to ten thousand."

He immediately began to search the Internet for exotic sports cars, since he's getting his license in October.

I have more modest expectations than he does. But I think the story turned out well.

So here's Part 1 of GRANDMA? – a young adult serial novel about zombies. I hope you have as much fun with it as we did…

"You think Grandma will be okay, Randall?"

My brother's eyes were wide with worry. Grandma's were fixed on the ceiling, her hand pressing a towel against her bleeding throat. She wore a dark blue dress with yellow flowers, the upper half soaked through with red. Blood also matted her hair.

I stared at Josh—seven years younger than I was and about to start third grade. He was sitting on the floor next to Grandma, holding her hand. A minute ago he'd taken a pillow from the sofa and put it under her head. There was a streak of crimson across the cabin's hardwood floor from when we'd dragged her into the house.

We continued to watch her breathe.

Her chest stopped moving. Josh squeezed her hand so tight his fist was shaking. I felt my heart count the seconds.

Grandma's eyes stared off into nothing.

"Grandma!" Josh brought her hand close to his face.

I remembered CPR, from swimming class in school, but Grandma had a hole in her neck. If I blew into her mouth, wouldn't the air just come out of the hole? And if I pressed on her ribcage, wouldn't that just cause more of her blood to come out the wound?

It was a small, wheezy gasp, but it proved she was still alive, and it was enough to stop Josh from squeezing her hand to death. I picked up Grandma's cordless phone on the floor next to us and listened to the recording.

All circuits are currently busy, please stay on the line…

I pressed the button to hang up and tried 911 again.

Same thing. What the hell was wrong with emergency services in Northern Wisconsin?

"Randall? What happened to her?" Josh's wide eyes had become wet and glossy.

I didn't know what to say. I couldn't tell him what I saw happen while she was gardening. I still didn't believe it myself.

I turned away, unable to look at him while lying. Instead I scratched my head, fighting to not cry.

"When are Mom and Dad coming back?"

Another lie. I had no idea when they'd be back. When they went hiking, they were sometimes gone all day. Sunset was still hours away, and there was no cell phone reception at the cabin. Mom had taken her purse, which had the car keys in it.

When they got back, we could get Grandma to a hospital. We had to wait for them. We had no other choice.

I thought about the garden. What I saw. And I realized something that made my hands shake.

Josh and I weren't safe.

"I'll be right back." I told Josh. "Keep pressure on the towel."

"I need to check something."

I didn't want what happened to Grandma to happen to me and Josh.

So I left the living room and began to check every door. The backyard, the patio, the front door, the garage door.

All locked. It wasn't that big of a log cabin.

Then I checked the windows.

Then I got to the backyard window. The brown curtains fluttered in the cool lake wind.

Large enough for a man to fit through.

I hurried up to the window and shut it hard, clicking the locks in place. Then I ran back to the living room.

Grandma and Josh were gone.

My heart went into overdrive. The towel was on the floor, blood staining the wood where she'd been. But there were no more streaks. She hadn't been dragged away.

Grandma must have gotten up.

Where the hell were they?

I ran back upstairs.

"Josh?" My voice not as loud as before.

The silence allowed me to hear my heart pounding in my ears. I waited for noise, for any movement.

Then the floor creaked. It came from the bedroom Josh and I shared.

Someone was in there.

"Josh?" My voice shrank to a whisper.

I walked silently down the hall and placed my hand on the door handle of our room, my palms sweating.

Was it Josh and Grandma?

Or was it something else? The thing I was afraid of?

Chill out, Randall. Just open the door. You can do this.

I pressed on the door, opening it an inch—

—and heard something squeak.

It wasn't the wooden floor. This was something different. Almost like a bird chirping.

Be Nike. Just do it.

I threw the door open, my heart pounding harder, revealing…

The silence mocked me. I took a step inside.

My ears told me it was coming from inside the room, but nobody was there.

It was a familiar sound. And close. But I couldn't place it.

I waited for the squeak to come again. As I did, my eyes scanned the room. No windows were open, so it couldn't be the wind. Maybe was just a chipmunk or…

The door was closed, and the squeaking sound was coming from inside.

I'd always been afraid of the closet, even though I'd never admit it to Josh. When I was his age and Mom and Dad took us to visit Grandma after she'd moved here, I kept all my fishing gear in that closet. I'll never forget going inside to get a pole, walking right into a giant spider web—one swarming with hundreds of little baby spiders that had just hatched. They crawled all over my face, into my hair and ears; me screaming and slapping while smearing spider guts all over my head.

From then on I kept my fishing stuff next to the bed.

I stared at the closet door, my hands at my sides, not wanting to open it.

The sound was definitely coming from inside. But why would Grandma, or Josh, be in there?

I wanted to run. I wanted Mom and Dad here. I wanted this to be a bad dream that I could wake up from. I wanted to be older than fifteen, so I would know what to do.

But the truth was, I
did
know what to do.

I had to check the closet.

My hand reached out for the closet knob, moving in slow motion. A cold drip of sweat ran down my forehead, stinging my eye. I took a huge breath and exhaled nice and slow.

It was probably nothing. I needed to stop being such a wimp.

Then I threw open the closet door—

—and saw the crazy old man who bit Grandma's neck standing there, Josh's bathtub rubber duck in his mouth.

He chewed on it.

His eyes were milky white, his face and clothes soaked in Grandma's blood. He reached out his arms for me, and I saw his hand had a large bite mark in it, so deep the bones were poking out.

I stood there for a moment, feeling like I had to pee, and then fear made my muscles move and I slammed the closet door shut.

The man—or whatever it was—began to squeak the duck again.

I stepped back, unable to breathe. Unable to run.

I needed to get away. But my body wasn't listening to my brain.

Then the closet doorknob began to turn.

I was so scared, my muscles all locked up, and my feet felt like they'd grown roots. I watched, lungs petrified, mouth open but unable to scream, as the closet door slowly opened.

The man in the closet was going to come out and bite me. Like he bit Grandma. And I was just standing there, just like a deer in the road, staring at the approaching headlights, too shocked to move.

It was Josh. He sounded far away, but hearing him snapped me out of my frozen fear. I sucked in a breath, and my legs began to move by themselves, hurrying me out of the bedroom and into the hall, toward the sound of my brother's voice.

I sprinted downstairs, back to the living room.

C'mon Josh, where the hell are you?

My eyes scanned the room, then I flew into the kitchen.

Basement. He was in the basement.

I sprinted to the basement and flung open the door. It was about twenty concrete steps down into a pit of black. I hit the light switch on the wall, but it didn't work. I was supposed to have changed the light bulb earlier. Dad told me to, three times. But I was fishing off the pier and had forgotten.

"Grandma's okay! She can walk and everything, Randall!" Josh's shrill voice rose through the darkness. "She can bake us her chocolate chip cookies like she always does, the ones with the Hershey's Kiss in the middle! She can garden again, just in time to harvest her cherry tomatoes! Grandma's okay!"

Josh was creeping me out. He sounded hysterical.

I took a step down, squinting, seeing nothing.

I should have been rushing down there. Rushing down to Grandma and Josh, and then getting them out of there before the man in the closet got us. But it was really dark, and I was freaked out.

Flashlight. I needed a flashlight.

I went back to the living room.

Where the hell did I put it? I had it last night when Josh and I were collecting pine cones for a pine cone fight. Did I leave it on the couch?

I threw the cushions aside, checking the inside of the sofa. A Cheeto—God knows how old—a quarter, some crumbs. I brushed off the fuzz and ate the Cheeto (turned out to be waaaay old), then went to the kitchen and began opening all the cabinets and drawers. I paused. My ears sharpened to—

My search quickened, shoving aside glasses and plates. Hands shaking, I found a box of light bulbs.

I went back to the basement door, clutching the light bulb box. The darkness giggled at me. I couldn't tell if it was Grandma or Josh or…