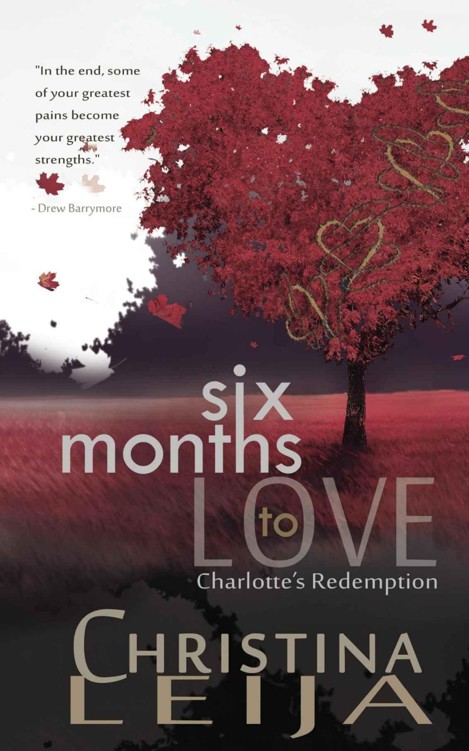 No part of this book may be reproduced or transmitted in any form or by any means, electronic or mechanical, including photocopying, recording, or by any information storage and retrieval system, without the written consent from the publisher, except where permitted by law.

To my wonderful husband Michael Leija, family and friends who stuck by me through this incredible journey. Without your love and support I would not have finished this book. To a fellow author, mentor, and friend JL Durfey thank you for everything and your continued support! Last but certainly not least my editor Cynthia Croley, without you at my side this project would never have been completed.

“Domestic violence causes far more pain than the visible marks of bruises and scars. It is devastating to be abused by someone that you love and think loves you in return. It is estimated that approximately 3 million incidents of domestic violence are reported each year in the United States.” -- Dianne Feinstein

“The scars you can't see are the hardest to heal. If you, a neighbor, stranger or a loved one are a victim of domestic violence please reach out and help. Sometimes just offering a hand will be that victim’s saving grace. Be an Angel, offer help.” – Christina Leija

Charlotte sat quietly sobbing to herself while nursing both her emotional and physical wounds. She had yet another fight with her husband. Normally she carried herself like a lady of breeding; tall and gentle. She was trained as a young girl to always have a lasting smile that could warm a room the instant she entered. She did that well, not from training: her warm smile came naturally to her, representing her warm and loving demeanor, however that often was taken as a sign of weakness.

She had long silky, light brown hair with natural highlights that people paid good money to try and achieve. Her hair was tangled around her face now, sticking to her cheeks from the warm falling tears.

Charlotte sat with her tender face swollen and blackened. Her once soft and gentle features were now rough and patchy, her eyes blood shot. She carried a cut below her left eye, blood pooled and dripped from the gash that Alex’s back hand had given her. The tears stung the cut as they passed through the open swelling wound. The pain made it hard to focus. What’s worse was her bruised ego that cursed itself for being this vulnerable and stupid…Why do I stay around and keep going through this? She thought to herself in a tone that was more angry than sad. Her eyes had a series of shadows under them that made her look as if she hadn’t slept in months.

Years was more like it, she thought to herself…..

With a sudden surge of anger and empowerment Charlotte had had enough! This was the final straw; she just couldn’t take it anymore! How dare he take everything away from her! How long was she going to sit here and take his abuse? Would he apologized again and foolishly her forgive him again? He had stopped apologizing for his anger and almost daily outbursts over a year ago.

The emotional strain had caused her to lose nearly 20lbs over the last year, which on her already frail frame made her look almost sickly or anorexic.

She’d become so use to his ways that it was almost normal to her, laughing slightly to herself she felt stupid to say the least. But…. this last fight in front of their son was it! The danger now extended to someone other than herself, to her one and only pride and joy, her son; Andrew.

She would never allow for her son to be conditioned into his father, to treat woman with such disrespect and hatred all for the sake of “proving you’re a man,” that you are “the head of the household and rule with an iron fist,” that’s not the right way at all.

Since six months after their marriage, Charlotte’s husband had shown his true self. After Charlotte failed to do the dishes, due to a headache, her husband broke every single dish in the sink and cabinets that were in close proximity. Crying and begging Alex to stop, he turned on Charlotte with a slow methodical smile that seemed more like a predator stalking his kill. Alex grabbed her by the arm, squeezing tighter with every word. You. Dare. Tell. Me. What. To. Do? Each word carefully drawn out in a statement of their own that continued to scare her with what might come next. Then in a swift shocking strike, her nose began to bleed as she was thrown to the floor by the force of his swing.

She can still remember that first fight. The one fight that had shaken her entire world. A fight that shocked her to her core every time she thought about it. One fight was all it took to caused her to “clam up” and close herself off to the entire world: she was broken.

She closed her heart off that day and didn’t allow anyone into her fragile heart; that is not until her beautiful baby boy came into this world.

More determined than ever after years of physical abuse and emotional reckoning, Charlotte began preparations to leave with her son, she was in danger more and more everyday but her dangerous situation was now, more than ever, threatening her son and his very existence. She feared what would come next should she stay.

But where to go? He would find her any place she tried to go and with the help of her husband’s mother backing for her “perfect husband,” she wasn’t sure she could leave with her life. Magda had a quick rise in the social standing since Alex had married Charlotte and she was just as determined as Alex to not let their name be tarnished. As if a divorce could do that, it was already tarnished form Alex’s past and wild childhood but of course Magda had convinced almost everyone that it was petty jealous rumors and that Alex was not that person. The things people believe, even when proof of the opposite is right in front of them, made her laugh.  Lately Charlotte was sick and hurting, secretly undergoing tests to find out why she was so sick lately, but she would guess that all this emotional strain was probably to blame. She would have to call her friend to come nurse her black eye and the cut above her right eye…again. This was the second time this month.

The abuse was getting more frequent. In the past Alex had been able to convince her that he was under stress and needed help controlling his temper, constantly telling her that he would attend counseling and marriage counseling to right his wrongs. When Charlotte pushed for Alex to follow through with yet another broken promise his mom would intervene and tell Charlotte that she was the one who needed counseling to learn how to deal with him and his outbursts, to learn how to control the situation before he got out of control, that Charlotte was the one who escalated the situation. How ridiculous was that?

Charlotte stood staring into the mirror almost feeling a ping of empathy for Magda. She stated that she had attended counseling to learn how to deal with Alex’s father before his “Questionable Suicide,” that left Magda with a substantial debt that she more than likely bet on Charlotte paying. Joke’s on her…of course Charlotte was to blame for that too.

Charlotte had her trust but her father had cut her off from anything extra when she chose Alex over her father. Alex promised to protect her and convinced her that love was all they needed, love would be the key to all and she wouldn’t have to worry. Her Alex was a darn good con man and finally Charlotte was beginning to see it. How had she not seen it before? Was love really blind?

Thanks to Alex and his controlling ways, Charlotte had grown a reputation for being flaky and stuck up from declining invitations and luncheons. What people didn’t understand was that she couldn’t attend with the constant bruises and broken bones without people inquiring. Alex didn’t help much making excuses saying that Charlotte wasn’t interested or was too busy to attend such trivial events. Even her volunteer work had slacked, her friends pushed away and hurt from her unexplained absence. Charlotte was all but isolated and she hadn’t even seen its severity until now.

First things first:  in a mental check list Charlotte noted that she needed to call Victoria to stitch this up before Alex came home. The one friend that she knew she could count on. Victoria was the only friend that Alex didn’t mind her having, a friend from school. Little did she know just how involved Victoria was in her family and that Victoria had her own agenda.

Emily's House (The Akasha Chronicles) by Wright, Natalie
The Quest of the Fair Unknown by Gerald Morris
I Wish You Were Mine (Oxford #2) by Lauren Layne
The Satanist by Dennis Wheatley
Recruits (Keeper of the Water Book 2) by George, Kevin
Lore vs. The Summoning by Anya Breton
The House by the Dvina by Eugenie Fraser
Crackers & Dips by Ivy Manning
Exquisite Danger by Ann Mayburn
Bone to Be Wild by Carolyn Haines