The Tunnel of Hugsy Goode 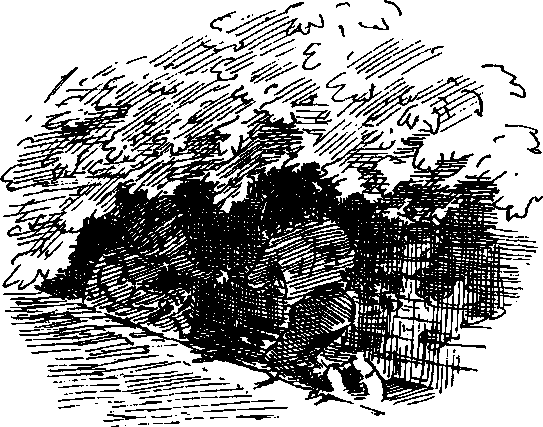 All rights reserved. No part of this publication may be reproduced or
transmitted in any form or by any means, electronic or mechanical,
including photocopy, recording, or any information storage and retrieval
system, without permission in writing from the publisher.

Requests for permission to make copies of any part of the work should be
mailed to the following address: Permissions Department, Harcourt, Inc.,
6277 Sea Harbor Drive, Orlando, Florida 32887-6777.

1Â Me and TornidâWho We AreÂ
[>]

3Â Beginning of the Tunnel QuestÂ
[>] 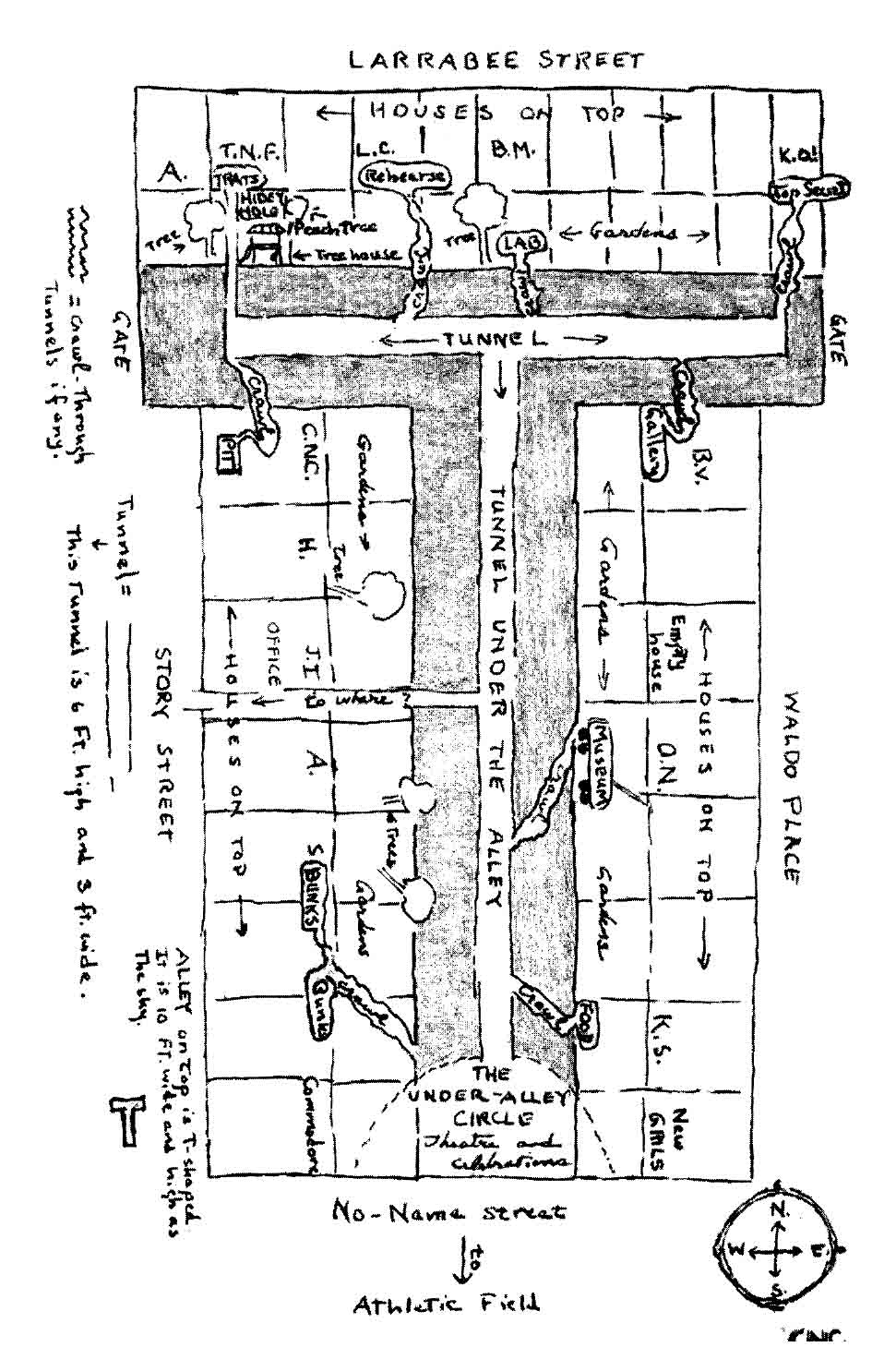 Chapter 1
Me and TornidâWho We Are

My real name is NickyâNicholas Carroll. I don't like the name "Nicky," so I have renamed myselfâCopin. A fake name. The real name of my pal is TimmyâTimmy Fabian. But we have renamed him Tornid. Fake name also. Few people know these names. I am eleven, in Grade Six. Tornid is eight, in Grade Three.

In this Alley where we live in Brooklyn, there is nobody my age to pal around with and nobody Tornid's age for him. There is a strike on in school right now, no teachers there. Our school pals live too far away to come to the Alley to visit unless it's an overnight deal, and there are too many of us Carrolls to ask them to sleep over. No room. The same goes for the Fabian family. So it's lucky Tornid and me both live here to pal around together. It's the month of May. Tornid and me hope the strike won't be settled soon because we have a big plan going and need time to work it out.

There are plenty of girls here in this Alley, but Tornid and me don't count them. We have to keep all our affairs secret from them, all our business. "Contamination," we call the girls. Me and Tornid have to call the girls "Contamination" to keep them from digging our top secret plans. We say the girls have been contaminated by fallout. Or, by just being girls. We close our eyes, try not to touch them or brush up against them, hold our breath, keep them out of Connie Ives's kitchenâone of our headquartersâkeep our mouths shut, and get past them, away from them as fast as possible. They don't like it, and the parents don't like it. But the game was not invented for them to like.

This Alley where we liveâon the campus of Grandby Collegeâis a T-shaped one with twenty-seven little houses on the three sides of it. All have gardens behind them backing onto the Alley, which has two gatesâiron grillâone at each end of the top of the T and usually kept locked. This Alley is a good place to live. But it is the alley under the Alley that has begun to bug Tornid and me.

A boy named Hugsy Goode, who used to live in the Alley, said one time, "There are tunnels under these houses, and they go from house to house."

Almost all the time our plans, our maps, our drawings, our talkâTornid's and mineâare about that alley under the ground. Even though afterwards Hugsy Goode said it probably wasn't so, weâTornid and meâwe believe it. We believe in the underground alley. We draw mazes of it, we inhabit it with good people and bad people, we have wars between two sides down there, in their bunks, their depots, their pitsâwe map out the areas of all their businesses down there. We have a lot of time for all this now because of the strike.

This book is about that underground alley.

The main people that are going to be in this book are Tornid Fabian, my pal, and me, Copin Carroll. Forget the "Timmy" and "Nicky" names our families know us by. But don't say, "Who's that?" if one of the moms calls us by those names as the book goes on, because they don't know our aliases. Not yet, anyway. Remember:

We have adopted the same middle name as part of our aliases.

There are six of us Carrolls now. My mom and dad stick to Christmas names, on account of Carroll, in naming us. So the two youngest are Holly, aged threeâa real hamâand Branch, a boy of one-half, real neat so far. The names of the others of us are: Steve, my brother, aged fourteen, real pious and residing on the other side of this room where I'm writing now (He has the best view of the Myrtle Avenue El.); Star (ugh)
contamination,
aged twelve; then me, Copin, aged eleven; then Notesy (ugh) more contamination, aged nine. You could say Holly and Branch start a new line of Carrolls, the rest of us being semigrown. 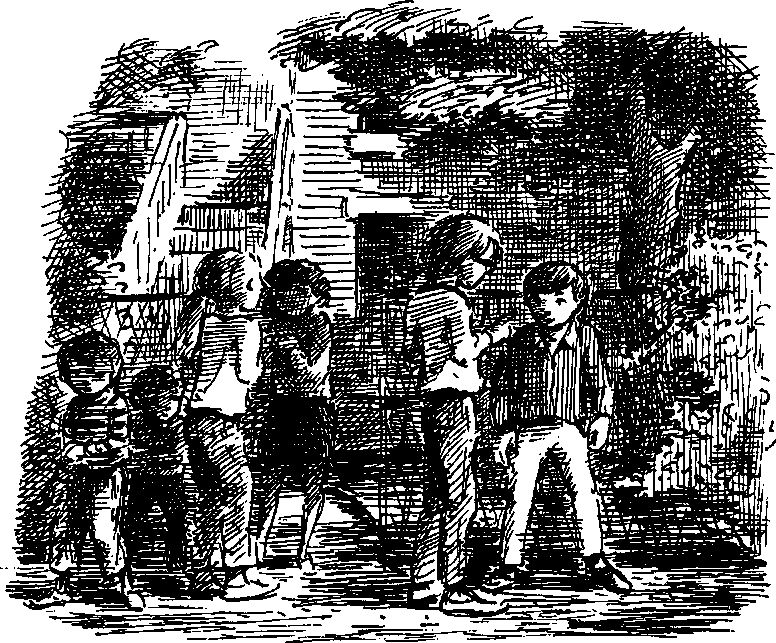 Now take the five Fabians, from the top. There is Isabel (ugh)â"
Contamination
Blue-Eyes" we call herâaged ten; next, aged nine, comes (ugh) Beatriceâ"
Contamination
Black-Eyes" we call her; next comes my pal, Tornid, eight; next Danny, aged six, a busy boy; and last, Bill, aged four, who prints his name LLIBâBill, spelled backward. It isn't that he spells his name backward on purpose. It is that he starts the "B" so far over on the right-hand side of the paper he has to put the "I" to the left of the "B" and so on. So it comes out LLIB. His mom says he will outgrow it, he is only fourâsays Danny used to do the same. Too bad, because LLIB looks neat, like code. Contamination Black-Eyes should try to stop trying to reform him. YNNAD would look neat, too, in our code.

Now you know the main people who are going to keep coming in and going out of this book. Some other people who live in this Alley may come into this book now and then, because there are twenty-seven families here and most people know everybody, or at least have their number. But this chapter is not meant to be a who's who of the Alley. And I'll tell you who the people are when they creep in, whosoever or whatsoever they may beâI know not yet myselfâas we get on into the top secret affair of the tunnel under the Alley.

It is me and Tornid, now, in charge of the affairs of the Alley, now.

The Fabians have a dog, Sasha, a golden afghan; they also have cats, fish, birds. Whatever comes their way, "Come in, come in," they say. Animal-loving people. Not
my
mom. Once we had one catâ
one
ânamed J.C. He went away long ago. We have had none since, though my mom permits collecting worms and butterflies.

And now, I will tell you the really sad news about the Alley. Talk about no place to go! We
used
to have a Circle at the end of the Alley to play in, to have a game of ball in, to turn our bikes around in. No more. No sirree. It is disgusting to have to relate that it was blasted away one spring day three years ago when I was eight and Tornid five. The four families whose yards backed onto the Circle wanted more garden. Each family gobbled up part of the Circle and attached it to their yard.

"Is this democracy?" my sister Star shouted.

No use. On went the blasting, the four families didn't care ... they didn't have any children any more. Now, the Circle end of the Alley looks like a concentration camp, and I heard a Gregory Avenue kid looking in on Tornid and me one day say, "The poor kids, they have to stay in
there?
"

Yop. Now ... no place to turn around in, no place to play games ... the Circle, headquarters for all the life of the Alley ... gone.

That is the reason Tornid and me have to think more and more about the tunnel that Hugsy Goode said probably exists under the Alley. Some place to go to make up for the loss of the Circle. You have to have some fun. The underground alley will belong to all, and we, Tornid and me, will be in charge. Let those families on top of the Alley try to tear down the Circle of the alley underneathâif there
is
a Circle down thereâand see what happens. Just let them. Hah!