Read To Love and Protect Online

To Love and Protect 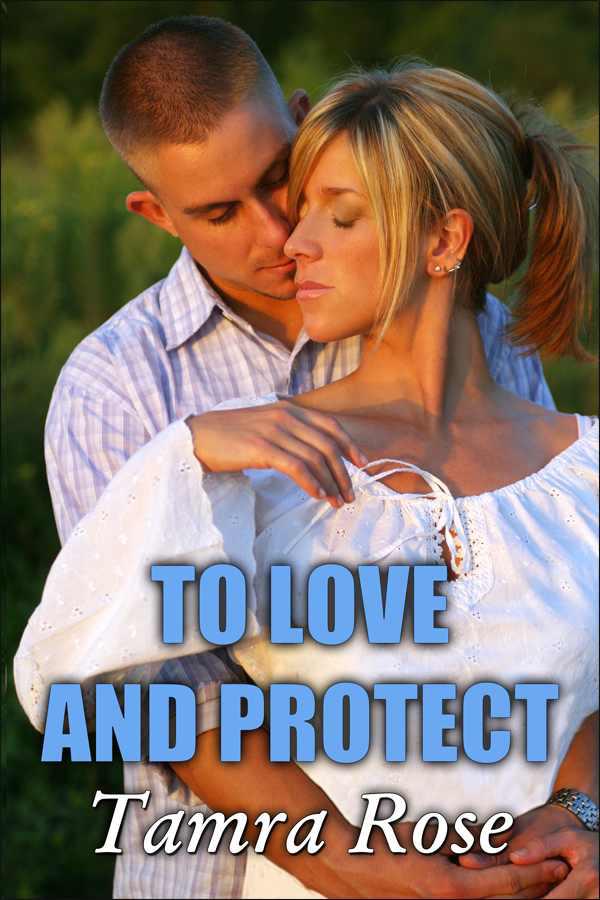 TO LOVE AND PROTECT
By Tamra Rose

“Shelley, I’m worried about you.”
Switching the phone to another ear as she repositioned a small black and white rabbit to her other shoulder, Shelley sought to reassure her sister.  “I’m fine – really, Diana.  I probably shouldn’t have mentioned anything to you.”

“Someone pelted your truck with eggs two nights in a row, your dogs are barking at something lurking in the woods behind your house, and you want me to believe you’re fine?

Shelley sighed, then smiled to herself, knowing that her sister was simply voicing her concern. “I know you’re just looking out for me, but I really do think it was just some bored teens having fun with an egg toss at my expense, that’s all.  And the dogs are
always
barking at something in the woods – usually a raccoon family.  But I promise if my truck gets egged again I’ll contact the police, just to be on the safe side.”

“Good,” Diana replied. “You know how I hate it when my anxiety gene kicks in.”

“Yeah, I hate it, too,” Shelley teased. “Well, I’ll call you tomorrow just to put your mind at ease that I’m still here.”

“Are you heading to the animal hospital?”

“It’s my day off, actually.  But I’ve got plenty to do around here.  I have a new bunny that needs some major TLC.”

"A bunny! Is he the latest addition to your family?"

"It looks that way.  A woman brought him into the clinic a few days ago.  She found him in her back yard with a hole in his back."

"Courtesy of another animal, most likely.  Anyway, he's the sweetest thing.  He must have belonged to someone, too."

"Have you ever seen a black and white, floppy-eared rabbit in the wild?"

"That does sound like someone's pet.  No one's claimed him?"

"Not yet, and at this point, I hope no one does.  I'm kind of getting attached to him."

"Kind of," Diana remarked, no doubt knowing her sister all too well.  "You've probably already made plans to build an addition on your house for him with carrot wallpaper or something."

"I'm not that bad," Shelley laughed, though she had no one fooled.  After all, her love for animals was boundless, and it was the reason she had become a veterinarian in the first place.  Caring for animals was a passion that had brought her much joy and fulfillment.  She peered down at Floppy – a name she had just thought of that seemed to work – and smiled at his wiggling nose.

If Ted were here, Shelley thought, he'd probably be laughing and shaking his head, telling her how they shouldn't be taking in any more pets, but knowing well that his suggestion would fall on deaf ears.  She looked up at the framed photo of him on the fireplace mantle.  He was smiling in the picture, his reddish-brown hair tousled by the wind, a light smattering of freckles across his nose and cheeks.  Even now, two and a half years after he was shot to death while responding to an armed robbery as a police officer, she still felt a twitch in her stomach as she gazed at his picture.

She had loved him, and he was gone, and her life went on.  She still had much to be thankful for – her family and friends, her pets, a rewarding career – but the emptiness left behind by Ted's death had yet to be filled.  No one could ever take Ted's place.  Shelley knew this.  But she also knew that even Ted would have wanted her to find happiness with someone else.  And though there were times recently when she felt ready for this kind of joy in her life, she found it hard to fathom that it could actually ever happen again.

"Hey," Diana began, curtailing Shelley's train of thought.  "Has Elaine been in touch with you about the three of us meeting up for dinner?”

Shelley rolled her eyes. Elaine was a wealthy, self-proclaimed matchmaker whose antics amused both sisters, though less so when they were on the receiving end of one of her schemes. “You realize this so-called dinner will be little more than a non-stop rant about how we both need men in our lives.”

Diana laughed.  “Well, she does practice what she preaches.  The ink is barely dry on her divorce papers before she’s up at the alter with someone else.”

“That’s our Elaine …”   Shelley's response was partially cut off by a call-waiting beep. "Can you hold on a second?  It looks like the clinic’s calling.”

They exchanged quick good-byes and Shelley switched over to the other line.  "Hello–"

"Shelley, this is Geri," the young veterinarian technician from the clinic said breathlessly.  "We have an emergency here. Make that two.  Dave's working on one, but a dog was just brought in that’s been shot."

"I'll be right over," Shelley said, depositing Floppy back into his cage and then grabbing her purse and keys.  "I'll be back, guys," she announced to her three dogs, who barely opened their sleepy eyes and seemed blissfully unaware that any sort of emergency was at hand.  Perhaps they had seen her rushing out the door like this too many times before to be fazed, she surmised.

"What does Dave have?"

Shelley glanced over to the reception area, where a grief-stricken family sat huddled together, waiting for word on their feline companion.  But Shelley knew she had no time to offer them comfort or assistance right now, as much as she wanted to.  There was another patient who needed her attention immediately.

The German shepherd was lying on her side when Shelley entered the room.  Two assistants were monitoring her vital signs, and Shelley only barely noticed the uniformed man standing in the corner.  She looked over at him for a moment, recognizing the uniform all too well.  It was the same grayish-green uniform Ted had worn.

"I'm Officer Matt Reardon," the man said, his voice strong and calm, but his brown eyes anxious.  "I was responding to a call about a robbery in progress.  Carly took the guy down, but there was another one hiding behind a stairwell.  He shot Carly just before I pulled my gun on him."

The scenario of an armed robbery shooting was all too familiar to Shelley, but she pushed the pain from her mind and forced herself to concentrate on Carly.  The critically wounded dog would need all her focus and quick-thinking actions to survive.

"I'll need to operate to remove the bullet," she said as she examined the entrance wound in Carly's left hindquarter.  "There aren't any major organs in danger, but the bullet may have severed an artery, judging from the rate of bleeding."

"Please," Matt said earnestly.  "Do whatever you have to do.  I can’t lose her."

Shelley looked up from Carly, her eyes locking with his. She knew that as a police officer, maintaining a calm, unruffled composure was second nature.  But she also knew that the possibility of losing a loved one – whether a person or a pet – could severely test that resolve.

"I'm going to do everything I can,” she reassured before turning to her two assistants, Karen and Jack.  "All right, guys, let's get her into the operating area."

As Jack pulled a portable table into the room to move Carly, Shelley looked back at Matt.  "As soon as I stop the bleeding and stabilize her, I'll come out and let you know where we're at."

"She's going to make it though, right?" he asked, his warm brown eyes strained with concern.

"She's lost a lot of blood.  If there's a major artery severed...” Shelley stopped, not wanting to be the bearer of bad news sooner than need be.

Matt clenched his jaw and nodded.  "I understand."

Shelley reached over and grasped his arm.  It wasn't an uncommon gesture for her to share with a frightened or grieving client at the clinic.  She was, after all, a nurturer.  A nurturer of animals, a nurturer of people.  And a person who was in anguish over the plight of a pet was a combination that pulled hardest at her heartstrings.

But this time, something was different.  Despite the crisis at hand and the gravity of Carly's situation, Shelley felt an unusual jolt, almost like a faint electrical shock.  She wondered if it were merely her adrenaline responding to the stress of the situation.  Or was it something more?

She looked up at Matt and met his eyes.  Time had a way of contorting when she was in the midst of an emergency, but still, she felt a flash of familiarity pass between them, despite the fact that they had only just met. She released her grasp on Matt's arm. "I’ll do everything I can."

"I'll be in the waiting area," he said, his voice firm but quiet.

Forty minutes later, Shelley came out from the operating room, wiping sweat from her brow with her sleeve as she walked over to Matt.  He had been staring out the window, but he quickly rose  from his chair as she approached.

"Carly's going to make it," Shelley said, her smile strong but her voice weary.

"She is?"  Relief flooded across his face.

"I removed the bullet from muscle tissue, so luckily there wasn't any damage to bone.  But I did have to repair an artery, and I gave her a blood transfusion to replace what she's lost.  She'll be very weak for at least the next few days, and she has a good month of healing ahead of her.  There's been a lot of physical trauma, including the surgery itself.  Dogs are resilient, but it's just going to take time."

"She lives with you, right?" Shelley asked, somewhat familiar with the dog and police handler arrangement.  She knew they would not only be partners on the job, but constant buddies off-duty as well.  The bonding between the two was crucial to insuring a successful law-enforcement team.

"She needs to be closely monitored for the next twenty-four hours.  But providing everything goes as it should, you can take her home tomorrow."
"Great."

Shelley’s eye caught a swatch of red as Matt’s arm swung back to his side. Only now did she spot a tear in the sleeve of his shirt and the nasty gash underneath it.  "Looks like you need to see a doctor yourself."

He glanced down at it quickly as though it was little more than a paper cut.  "It's nothing."

"May I?" she asked, nodding at the gash.

"I thought you only looked after furry things."

"Haven't you ever seen one of those hairless cats?  Or a baby bird with no feathers?  I take care of them, too, so I can take care of you.  Now let me see."