Wonders in the Sky (9 page)

61 AD, China
A golden apparition is said to have spread Buddhism

Han Emperor Mingti, who had heard of Buddhism, had a vision of a golden figure floating in a halo of light â interpreted as a flying Apsara (Buddhist angel). Some sources present this vision as a dream, others as an “apparition.” Arthur Lillie mentions it as a “golden man, a spirit named Foe,” while Gray calls it “a foreign god entering his palace.”

Whatever it was, the visionary being was interpreted by the Emperor's wise men, including Minister Fu Yi, to be the Buddha himself. Consequently, an envoy was sent to India to learn about the new religion, returning with sacred Buddhist texts and paintings as well as Indian priests to explain the teachings of the Buddha to the Emperor.

The narrative we have does not mention any physical object in the sky at the time, which strictly takes the event out of the realm of aerial phenomena. As will be seen in Part III of this book (“Sources and Methods”) the two coauthors have had extensive debate over the wisdom of including such cases in this catalogue, especially from sources steeped in myth and symbolism. 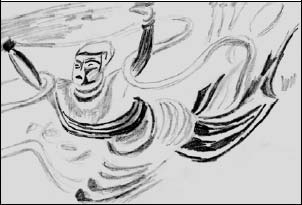 On the one hand, there are thousands of instances where witnesses describe “entities” similar to those typically associated with UFOs, in connection with a “halo of light” that can hardly be considered as a material object. These are often reported in the contemporary literature as “bedroom visitations” or apparitions. We did agree that a difficult line must be drawn between such events and reports of ghosts, ape-men or monsters, which belong in a related but separate study. On the other hand, we find continuity between the interpretation of “signs in the sky,” aerial objects with entities aboard, and flying or luminous entities seen by themselves. Accordingly, we have included a limited number of prominent cases of this kind.

Flavius Josephus writes: “On the one and twentieth day of the month Artemisius, a certain prodigious and incredible phenomenon appeared: I suppose the account of it would seem to be a fable, were it not related by those that saw it, and were not the events that followed it of so considerable a nature as to deserve such signals; for,
before sun-setting, chariots and troops of soldiers in their armor were seen running about among the clouds, and surrounding cities
.”

“When the Roman Emperor, Agricola was in Scotland (Caledonia), wondrous flames were seen in the skies over Caledon wood, all one winter night. Everywhere the air burned, and on many nights,
when the weather was serene, a ship was seen in the air, moving fast.”

The passage goes on to describe another staple of Fortean literature: “In Athol, shower of stones fell from the sky into one place, and a shower of paddocks (frogs) fell on one day from the sky. And high in the air, at night, there raged a burning fire, as if knights in armor and on foot or horse fought with great force.”

Here again, these phenomena were not simultaneous or even in the same region but they provide us with a treasure-trove of anomalies, from the fall of frogs to the mention of an aerial ship. Caledon Wood appears in Geoffrey of Monmouth's rendition of the King Arthur legend (in
The History of the Kings of Britain
). Arthur defeated the Saxons at Caledon Wood, among other places.

“We read in Herodian that in the time of Commodus stars were seen all the day long, and that some stretched in length, hanging as it were in the midst of the air, which was a token of a cloud not kindled but driven together: for it seemed kindled in the night, but in the day when it was far off it vanished away.”

“I shall now speak of what happened outside, and of the various rebellions. For three men at this time, each commanding three legions of citizens and many foreigners besides, attempted to secure the control of affairs â Severus, Niger, and Albinus. The last-named was governor of Britain, Severus of Pannonia, and Niger of Syria. These, then, were the three men portended by the three stars that suddenly came to view surrounding the sun when Julianus in our presence was offering the Sacrifices of Entrance in front of the senate-house.

“
These stars were so very distinct that the soldiers kept continually looking at them and pointing them out to one another, while declaring that some dreadful fate would befall the emperor.
As for us, however much we hoped and prayed that it might so prove, yet the fear of the moment would not permit us to gaze up at them except by furtive glances.”

Were the “bright stars” a case of parhelia or false suns? The description here does not suggest simple refraction.

235, Weinan, China
A red object flies above the Emperor's army