Wonders in the Sky (5 page)

The prophet Elijah (1 Kings 16:29 to 2 Kings 2:18) practiced his ministry in Israel during the reigns of King Ahab (874-853 BC) and his son King Abaziah (853-852 BC). The trouble began when Ahab married the pagan princess Jezebel and erected an altar to Baal in Samaria.

Baal was the Sun-God of the Phoenicians, and a Sacred Pole was used to chart Baal's journey through the twelve signs of the zodiac. According to the Old Testament, by embracing the religion of a “false God,” Ahab did more to anger “the Lord” than any of the kings of Israel before him.

The prophet Elijah (Elias) the Tishbite then delivered a divine message to King Ahab that God would bring a drought to his kingdom. The significance of this message was that Baal was worshipped for his supposed power over the sky and the weather, so God's message was a direct challenge to Baal and a sign of displeasure. 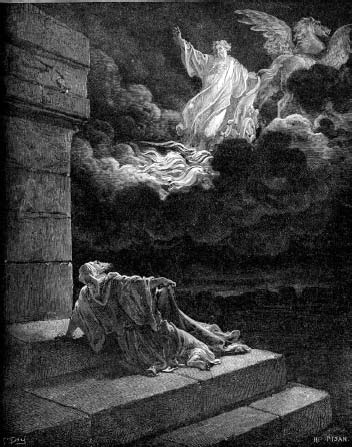 The second chapter of 2 Kings mentions an episode when Elijah revealed he was about to be taken away:

“And it came to pass, when they were gone over, that Elijah said unto Elisha, Ask what I shall do for thee, before I be taken away from thee. And Elisha said, I pray thee, let a double portion of thy spirit be upon me. And he said, Thou hast asked a hard thing: nevertheless, if thou see me when I am taken from thee, it shall be so unto thee; but if not, it shall not be so.

“And it came to pass, as they still went on, and talked, that,
behold, there appeared a chariot of fire, and horses of fire, and parted them both asunder; and Elijah went up by a whirlwind into heaven
.” â 2 Kings 2:11.

Elijah was the only Old Testament prophet who did not die, but was said to be
taken up
to heaven. Even today, Jews are waiting for Elijah to return. An empty chair and a goblet of wine are set at the Passover feast table as a reminder of this belief. The Mormons, on the other hand, believe that Elijah came back on April 3
rd
1836, appearing before Joseph Smith.

Source: Unless otherwise indicated, we are using the King James Version of the Bible.

Ca. 593 BC, Chaldea, near the river Chebar, Iraq
Ezekiel's abduction

The Bible states that Prophet Ezekiel saw a strange craft appear in the sky above him. It consisted of “wheels within wheels,” a brilliant dome, and four beings. He was transported to a mountaintop, without knowing how he got there, and remained stunned, an experience reminiscent of numerous contemporary reports by people claiming abductions.

We are not so naÃ¯ve as to believe that the Ezekiel account in the Bible, which was written down centuries after the life of the prophet by that name, represents a first-hand report of an observation, any more than the abduction of Elijah in the previous account. Wikipedia notes that “the academic community has been split into a number of different camps over the authorship of the book. W. Zimmerli proposes that Ezekiel's original message was influenced by a later school that added a deeper understanding to the prophecies. Other groups, like the one led by M. Greenberg, still tend to see the majority of the work of the book done by Ezekiel himself. Some scholars have suggested that the person described by the Book of Ezekiel may have suffered from temporal lobe epilepsy, which has several characteristic symptoms that are apparent from his writing. These symptoms include hypergraphia, hyperreligiosity, fainting spells, mutism, and pedantism, often collectively ascribed to a condition known as Geschwind syndrome.”

Even with these qualifications, the account is remarkable for Ezekiel's description of a phenomenon that would resonate with the people of his time, and still strikes us by its awesome imagery:

“Then I looked, and behold, a whirlwind was coming out of the north, a great cloud with raging fire engulfing itself; and brightness was all around it and radiating out of its midst like the colour of amber, out of the midst of the fire. Also from within it came the likeness of four living creatures. And this was their appearance: they had the likeness of a man. Each one had four faces, and each one had four wings.”

The text goes on: “Now as I looked at the living creatures, behold, a wheel was on the earth beside each living creature with its four faces. The appearance of the wheels and their workings was, as it were, a wheel in the middle of a wheel. When they moved, they went toward any one of four directions; they did not turn aside when they went. 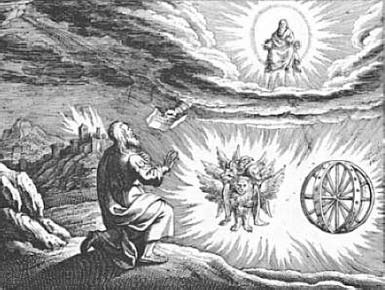 Fig. 2: The abduction of Ezekiel

Later Ezekiel describes what today would be characterized as “abduction”:

2:9
And when I looked, behold, a hand was stretched out to me, and a written scroll was in it

3:12
Then the spirit lifted me up, and as the glory of the Lord arose from its place, I heard behind me the sound of a great earthquake.

3:14
The spirit lifted me up and took me away, and I went in bitterness in the heat of my spirit, the hand of the Lord being strong upon me.

3:15
And I came to the exiles at Tel-Abib, who dwelt by the river Chebar. And I sat there overwhelmed among them seven days.

It is noteworthy that the description includes some words that appear only once in Ezekiel's writing and some that only appear once in the entire Old Testament, an indication that the prophet was indeed looking for ways to express a vision that surpassed his understanding â and the ability of translators to adequately convey his experience.

“In the consulate of Aulo Postumio Albino Regillense and Spurio Furio Medullino Fusco, once again and with great splendor a burning in the sky and many other prodigies appeared with shapes and strange figures, frightening the spectators.”

Such accounts are frequently found in old texts, yet they are of only marginal interest to us, in spite of their tantalizing context, because they give no hint of a description of an actual event. A “burning in the sky” could be a common meteor or an auroral display, and there is no evidence that the “shapes and strange figures” were seen in the air. These considerations, well understood by most scholars of ancient texts, have led us to exclude many such references from our Chronology.

It is important to note that the version of Obsequens' chronicle containing the reference cited here was not the original. In 1552, humanist Conrad Wolffhart (1518-1561), who took the Greek name of Lycosthenes, edited the chronicle and added illustrations from wood-cuts. Obsequens'
Liber de prodigiis
(Book of Prodigies) was an account of the portents observed in Rome between 190 BC and 12 BC. As some of the original text had not survived, Lycosthenes reconstructed the missing parts himself, starting at 749 BC, from other historical sources. Therefore, the records attributed to Obsequens from prior to 190 BC were possibly not in the Latin original.

The Tide: Deadrise by Melchiorri, Anthony J
Cold Case at Cobra Creek by Rita Herron
Someone to Watch Over Me by Yrsa Sigurdardottir
Sweet Carolina Morning by Susan Schild
All That You Are by Stef Ann Holm
The Garden Party by Peter Turnbull
ReclaimedSurrender by Riley Murphy
Lost Girl: Part 2 by Elodie Short
Bind the Soul by Annette Marie
The Voice of Prophecy (Dual Magics Book 2) by Meredith Mansfield